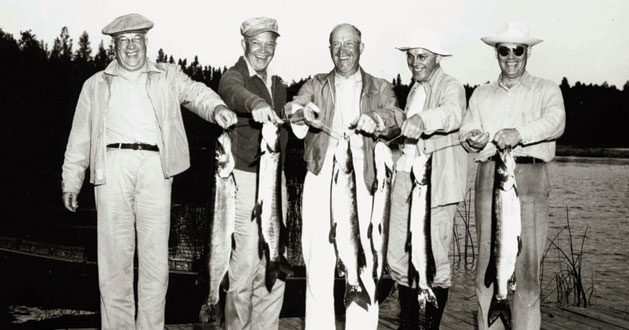 America’s Founding Father was not only the Brits’ worst nightmare, he was also a badass woodsman, whiskey distiller, tobacco farmer, and once dabbled in spinning and weaving. We’re excusing the last two knowing that the First Prez also hauled in cash via commercial fishing on the Potomac, and took not one but three fishing breaks during the Constitutional Convention. George Washington—a man who could not tell a lie… not even when it came to fishing.

Counting the same fish twice is a natural slip when relaying river scorecards to beer-guzzling buddies. Cleveland, on the other hand, scores an uncontested double on the presidential stringer—22nd and 24th—due to the depression that split his terms. Fond of outdoors action, “full of fun and inclined to play pranks,” perhaps Cleveland’s greatest nonpresidential achievement was convincing his new wife (righteous babe, Frances Folsom) to go flyfishing during their honeymoon in Maryland.

Harding was a Republican from Ohio and the first newspaper publisher to be elected president, via an “America first” campaign that encouraged industrialization, strong economy, and foreign independence in the aftermath of World War I. While his “Ohio Gang” of financially powerful appointees pursued scandal, corruption, bribery, fraud, and a sprinkling of prison time, Warren G. played it safe taming the national unemployment rate and chasing tarpon off the Texas coast.

From his early years catching sunfish out of Iowa’s Wapsinoc Creek, to his years in Oregon fishing the Rogue, McKenzie, Willamette and Columbia, our 31st President always made fishing a top off-time priority. There’s even a book called Herbert Hoover, The Fishing President, by Hal Wert. Though trout fishing the swift rivers of the West was his first love, he, like many of us, eventually made it to saltwater, chasing bonefish and permit on the flats, and even went sailfishing on occasion. Hoover’s oft-repeated quote plays up the sport’s inherent democratic principles: “All men are equal before fish.”

Hold the phone. Call the fish cops. Eisenhower, a five-star general and former Supreme Commander of Allied Forces, was once fingered for having more than his legal limit of Colorado trout. In an inquiry referring to the 1952 accusations, an irked Ike lamented, “Who’s been counting my fish?!” Good question. Our Capitol Hill correspondents pin the red herring on either Joe McCarthy, who Eisenhower covertly opposed, or then vice president tricky Dick Nixon, foreshadowing his penchant for fudged numbers and political espionage.

With the possible exception of Hoover, President Carter is probably the most famous fishing president, having a lifetime of Georgia bass fishing, Appalachian trout fishing, and Gulf Coast saltwater under his Southern belt. And he easily has the best presidential fishing story, from April of 1979, when he was fishing on his private farm pond and was “attacked by a killer rabbit” (above). A great story, that in no way helped his bid for re-election.

While both Bushes put their time in chasing stripers off the coast of their family compound in Kennebunkport, it seems the elder Bush—when both were along—was generally at the helm. While sometimes criticized for the size of their stripers, (Reuters photo caption: “Are the Bush’s immune from the regs?”), they at least can be credited for getting after it in less-than-ideal weather conditions, even if they once got the anchor so stuck that it had to be retrieved by Secret Service divers.