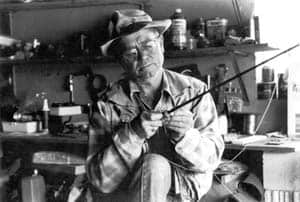 I grew up under the roof of a fly fisherman, a well-respected guide whose father – a guide himself – was a pioneer on his native Snake River. I remember him as a skilled caster who could throw a line more that 90 feet and make it seem effortless. I remember him, too, as a superb oarsman, getting his low profile raft into the tightest of positions. But more than anything, I remember him as a fly tier.

In a small room of the house I grew up in, my father would toil away the short days and long nights of a Wyoming winter churning out an endless supply of flies – between 12,000 and 15,000 every off-season, filling orders for local fly shops and private clients, as well as making sure his own boxes were full. As a small boy, I would follow the heavy smell of head cement into his tying room, where I’d watch him work amongst the piles of deer hair and stacks of hackle, an unfiltered Camel dangling from his lips and a constantly filled cup of coffee sitting off to his left – out of the way, yet within easy reach of his non-thread hand.

One night during the winter of 1981 – no one knows exactly when, but I like to think it was on one of those nights I was watching him – my father completed the last fly of an order of 50 dozen Joe’s Hoppers for Jack Dennis’ shop in Jackson, Wyoming. He immediately began switching his materials so he could start in on an order of Humpies – his favorite fly and the one for which he had the most orders. But as he finished that first Humpy, he realized that he’d neglected to switch his hook from a size 8 to a size 10. He was left with a Humpy tied to a half-empty hook.

It was a simple mistake at the tying vice and almost anyone else – myself included – would have looked at this fly and simply thrown it into the trash with the clippings of deer hair, hackle and, peacock herl. My dad didn’t. Instead, he took a look at his “mistake” and squeezed another Humpy body onto the hook. The following spring, he distributed a handful of these new flies to his fishing friends and guides on the Snake River. It was incredibly productive – more so, I am told, then any other fly on the Snake had been for years. By the end of that season, my dad’s new pattern had a new name: the Double Humpy. The same Double Humpy that has been written about in dozens of fly fishing books and magazines and is now a staple of fly shops all over the West.