Troutopia In The Land Of Absentee Wealth 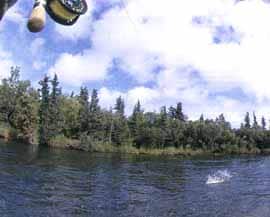 When I first moved to Ketchum, ID and the hallowed Wood River Valley, I was drawn like most to the more wide open spaces in the drainage. Multi-million dollar Hollywood alpine retreats, and lodges with over-the-top “great rooms” tended to dot the “up-valley” rivers and detract, I felt, from the experience.

Trying to determine the terrestrial du jour while tromping through Mr. and Mr. Thurston Howell’s backyard barbeque would, I figured, be too much a buzzkill. Besides, houses meant residents, which meant over-fishing.

For a full year, my first, I dutifully drove to the intro access spots and parked alongside behemoth special-edition SUVs and waded around fellow fisher-folks. Though it wasn’t exactly combat fishing, rarely did I have more than a half an hour of solitude at any point.

The next summer, I found myself employed at one of the several local golf courses. (“Employed” is a rather loose term, as I was really the course “marshal” [somewhere between lifeguard and concierge] in trade for a free membership). One glorious early July day, trying to flesh some balls out of the stream banks, I noticed a darkened form torpedo into the undercut before reappearing several minutes later to take some late-hatching drakes.

Just beyond the bank, opposite the tee-box, was a large and new split-level house, replete with a well-appointed backyard. I watched a bit longer and noticed two things: another 20-inch native rainbow slide alongside the first; and the fact that no one was home.

Returning that evening I caught and released several fish, each larger and more brilliant than those I had seen earlier. By sunset, I had waded through a couple hundred million in backyards, and had a most epic session of surface-feeding rainbowsÂ—Â—all 12 to 23 inches, sporting genes that predated the Shoshone Indians. And all this while portaging around decorative rock gardens and hot tub sheltersÂ—alone, save some expensive vacancies and lawn gnomes.