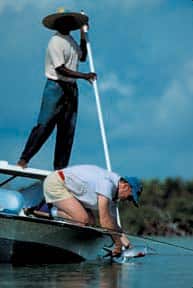 “It’s been a grand tournament so far – don’t you think?” asked the prideful chairman to the leather-tanned skiff guide approaching the trophy table.

“Grand, perhaps, in the sense of fine weather,” the guide scoffed with a sidewise glance toward the competitors gathered on the dock.

The chairman set down his Styrofoam cup with the lime slice wedged on the rim and nervously fingered the embroidered sponsor logo on his shirt. “But, has it not been grand overall?”

“No. Overall it’s been a tad less than grand.”

“The competitors? Have they not been grand?”

“I’d like to line them up shortest to tallest and flog them with their nine weights.”

Sweat beading on his brow, the chairman leaned and glanced fretfully around the marina. “Is there a problem on your boat?” he whispered.

“Only if cheating is a problem.”

“Is cheating a problem?”