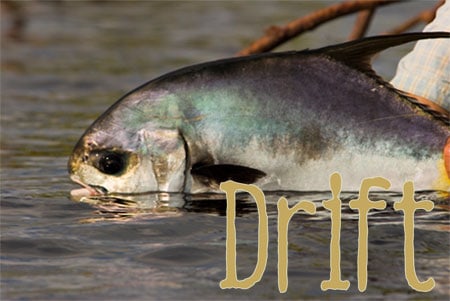 Production on Drift began in September of 2007. A total of five separate segments are planned for the movie, as well as the introduction and a closing piece. The end result will be a movie of approximately 65 minutes.

Locations for “Drift” include:

Updates, location teasers, and details for film locations can be found on the movieâ€™s website at www.confluencefilms.tv

“Drift” or parts thereof will, at a minimum, be seen at the 2008 Flyfishing Video Awards, at the Industry Premier at the Denver Fly Fishing Retailer Show (screened in High Definition,) as part of existing organized film tours, and at a number of outdoor film festivals throughout North America. (Confluence Films will be submitting “Drift” to dozens of these film festivals, including Telluride, Banff, Monterrey, and more. This is where Chris Patterson’s long-time film and production connections will be invaluable in regards to festival marketing.)

Confluence Films will also be partnering with a number of conservation groups and entities throughout the country who will sponsor a “city premier tour” of the film as fundraisers for various environmental and conservationbased causes. For example, we have showings in Portland and Bend, Oregon in November that are being held in conjunction with Oregon Trout. They will handle the marketing and organization for the events, with a large percentage of the event profits being donated back to their organization. With plans to offer these conservation fundraisers in conjunction with major conservation entities and environmental groups throughout the country, we see this as a way to introduce well promoted, well attended showings in up to 30 major metropolitan areas and key fly fishing markets throughout the U.S.

Availability of “Drift” on DVD

The movie will premier at the Fly Fishing Retailer Show in Denver on the night of Monday, September 15, 2008 projected in High Definition. Public premiers and a conservation-based film tour will begin on September 20. The DVD will be available for purchase on November 1, and will be available to the public through the following outlets:

Complimentary promotional copies and media copies for the movie (along with complete media kits) will be available at the Fly Fishing Retailer Show in Denver. Confluence Films will have a booth adjacent to both Yellow Dog Flyfishing Adventures and The Drake.

For more information, please feel free to contact Jim Klug at jim@yellowdogflyfishing.com or at 406-581-6434.