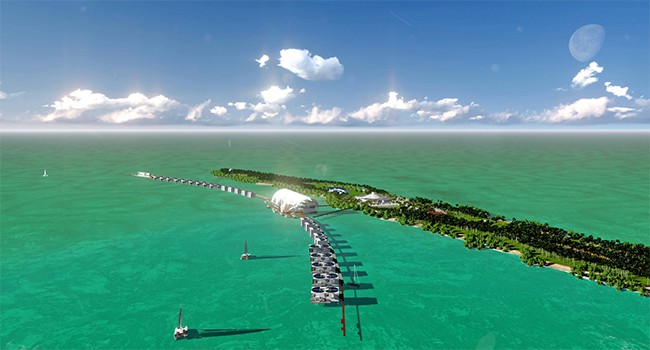 Don’t do it Leonardo. And a few words from Omar Arceo

I want to share this award with all the indigenous communities around the world. It is time that we recognize your history, and that we protect your indigenous lands from corporate interests and people that are out there to exploit them. It is time that we heard your voice. —Leonardo DiCaprio, Golden Globes, Jan. 10, 2016

WE DIDN’T KNOW IT AT THE TIME, but this heartfelt speech from DiCaprio might have been his best acting job yet. Four days later, at a public meeting in San Pedro, Ambergis Caye, Belize, results were shared from the Environmental Impact Assessment for DiCaprio’s latest project—a luxury “eco” resort planned for Blackadore Caye, about 10 miles northwest of San Pedro.

DiCaprio and partner Jeff Gram paid $1.75 million for the 104-acre island in 2004, after the two had met on nearby Cayo Espanto, which Gram also owns. There are plenty of iffy aspects to the development, starting with its greenwashed “Restorative Islands” name, but among longtime local permit guides, many who’ve been poling clients around Blackadore for more than 20 years, two especially intolerable details stand out: 1) An unlovely string of 20 to 30 guest villas scheduled to be built over water that was added to the Hol Chan Marine Reserve just last March. 2) An alleged need to keep the beaches and flats surrounding the resort “private and secure” due to the high-profile nature of its pending douchey guestlist.

Since Leo is so concerned about the voice of indigenous people, we figured we’d ask one to share his thoughts: Lifelong local and 25-year veteran permit guide, Omar Arceo, AKA “Dr. of the Flats.”

We are against the overwater structures proposed for the north and south of the island. The main pier on the north side would be right on top of the flat, over permit feeding grounds. We’ve worked closely with the fisheries department to ban net-fishing and commercial fishing from these flats for the sole purpose of conserving the ecosystem. We are prepared to stop this construction of the overwater structures. Our community has stopped two other companies wanting to build overwater structures on the reef.

The position of the flats makes it ideal for permit. On both sides there is deep water, so permit come in from the deep and go to the sandbar, which is about one mile wide and three miles long. There is two to three feet of water in the middle. It’s a bed of hard rock with sandy bottom. It’s because of this hard rock that they want to build on the flats—the bottom can sustain it. This is where permit feed because it’s crustacean habitat; it’s perfect for them.

We have no issue with them building on his land. He [DiCaprio] can build a ten-story building on his island, no problem. But the overwater structures violate the Queens Rule, as well as Section V of the Hol Chan Marine Reserve. This is why we are appalled at the project’s proposal to build over the water. He is claiming the flats as part of his property, and that is unacceptable.

Privatizing the entire zone for his own pocket is our biggest concern, and the complete disregard it shows for the Queens Rule is by far the worst thing about this project. They have no idea how famous these flats are, or how pertinent they are to the flyfishing industry in Belize. To say that there are security concerns highlights his ignorance of the indigenous people on this island.