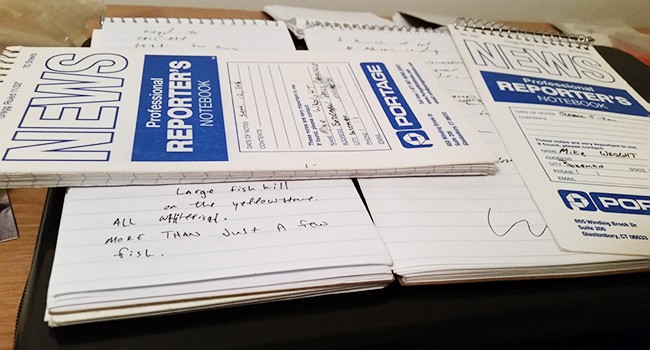 After a long journey through the islands of the North Atlantic, we’re finally back in the United States – smack dab in the middle of the states actually. Both parts of this episode take us through the Rocky Mountains. In the first part of the episode, we visit a fishy hideout in the suburbs of Denver, Colorado and then after the break, we hear about the whitefish kill of August 2016 on Montana’s Yellowstone River. Make sure to stick around until the end to get the entire story.

Listen to the audio

. And many thanks to Yellow Dog Flyfishing Adventures and Scott Fly Rods for making this episode  possible.

Nearly a year ago, before this podcast was a twinkle in Tom Bie’s eye, he needed to be convinced that The Drake’s readers would be interested in audio stories about flyfishing. So a young intern set out to make a find a story that would change Tom’s mind. He stumbled across a secret stash of flies in Littleton, Colorado and he knew he had his angle. It’s in this garage that we meet Peter Stitcher, the owner of Ascent Fly Fishing. He shows us his underground operation and reveals a few fishy tips that should help us all catch a few more trouts. We then take Peter’s ideas and head into the mountains to see if they work.

The second half of the episode is a look back at last year’s massive die-off of whitefish on Montana’s Yellowstone River. Bozeman Daily Chronicle reporter Michael Wright originally broke this story in August of 2016. He shares with us the development of the crisis, how it affected the local community, and how the experience has shaped Montana today. Click here to read a written version of Michael Wright’s story.