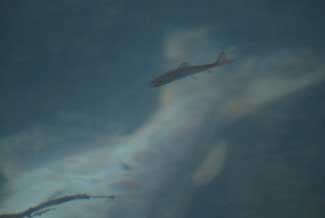 The pacific ocean covers 70 million square miles of this planet. A vast network of birthing rivers is needed to fill a biologically meaningful portion of so great a sea with salmon. One of the most crucial of such networks is the Columbia/Snake river system, a single great Y-shaped flow, each wing of the Y a thousand miles in length, draining 260,000 square miles of continent all told.

The entire salmon and steelhead population of the Columbia wing was destroyed in a day, fifty years ago, by the Grand Coulee Dam. The Snake wing is now the only significant salmon sanctuary left in this system. Thanks to the Wilderness Act, hundreds of its tributaries remain intact and healthy. Yet extinction for the remaining Snake stocks is predicted to begin in 2017 and be complete a decade or so later. The problem is the infamous lower Snake River dams. A 130-mile corridor of flaccid, desert-heated, predator-filled slackwater and four killing sets of turbines sit between the Pacific and the salmon’s vast wild refuge, killing in past years up to 97 percent of ocean-bound juveniles and 40 percent of returning adults every year.

In just 25 years the dams have wiped out 90 percent of the system’s salmon, extirpating many discrete strains. Three billion taxpayer and ratepayer dollars have been spent “techno-fixing” the dams, yet every surviving salmon is endangered. Hatcheries cannot replace these salmon. The “man-made” strains are essentially just batches of identical first-cousins, forced to inbreed till they self-destruct due to technological incest. It is wild stocks alone that give hatchery and net-pen salmon their fleeting viability. Without wild salmon in a river system, there are soon no salmon.

An industrial economy can only remain profitable by achieving lasting balance with the natural economy that supports it. A majority of Americans, including editorial boards of scores of major newspapers, now embrace this view. The New York Times called the lower Snake dams “a colossal ecological mistake” and states that “an unprejudiced calculation of costs and benefits” would force Congress to fund their breaching. When ex-Senator Slade Gorton saw this editorial, he responded with a tirade in the Times, claiming that breaching the dams would “destroy the way of life in eastern Washington, eliminate our transportation system, raise electricity rates and cost our farmers their irrigation water.”