Confessions of a Flyfishing Concubine 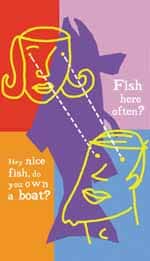 Flyfishing is a sexy sport. This I know because I’m in awe of good fishermen, which has left me attracted to grubby guys I normally wouldn’t have noticed except maybe to offer them change. I’m not too experienced a flyfisher and I’m a terrible flirt, yet when it comes to mixing the two together I find astounding confidence. I could never ask a guy out and I can’t even hold a conversation with someone I’ve got a crush on, but I don’t hesitate to invite myself along in a stranger’s drift boat. And I can walk confidently into a fly shop and strike up a conversation with any random man. Some people use beer goggles as an excuse for a momentary lapse in judgment. I think I’ve got fish eyes.

Hence, I’ve become somewhat of a flyfishing slut. I’ll pretty much go with any guy who asks me and I admit I’ve used guys for their knowledge (or their drift boat) on several occasions. For me, the phrase “getting lucky” takes on a whole new meaning. I’ve even wandered into a fly shop knowing that a little flirting would give me some leverage when discerning the location of a secret fishing hole. If I’m really lucky I get a few free flies.

I started flyfishing because of the boys, or at least because of a boy. My boyfriend at the time didn’t want to teach me to fish. Then along came a guy who loved to take me fishing. Ah the romance of it all! The insects, the fish, the muddy grass bogs, the flow of the river. Much to the chagrin of my then-boyfriend, who wondered how I suddenly knew the difference between a prince nymph and a blue winged olive. Neither relationship lasted long, but I came away from the experience with a deep affection for flyfishermen. Fishing with a guy is also a great barometer of his other important features. As a female it is second nature to analyze his every move. Does he offer me a good fly that may actually catch fish, or does he offer me some ratty-ass, rusty-hooked, hapless non-floater because he figures I’ll lose it in a tree anyway? Does he tie it on himself or teach me how? Does he grab the rod from my hand mid drift as soon as a fish appears? I won’t even go into the guy who gave me stripping lessons.

Fish with as many guys as possible. And, no matter what anyone says, size does matter. When a guy pulls a beautiful twenty-two inch glowing rainbow out of the river, it illuminates him. Maybe those are the infamous sparks that people in love talk about. Maybe my fish eyes are activated by lunkers.

Of course, as a girl you always run the risk of ending up as a fishing buddyÂ—just one of the guys. I try to hold onto a bit of femininity on the riverÂ—drink from a bottle, not a can, that sort of thing. But when a guy starts relaying the details of a date he had the previous night, I know I’ve crossed that line into Fishing Buddy Land. That’s the risk you take when you fish with many different men. Some get away, some you gotta play a bit, some will jump right into your net.

–Dena Foltz fishes and writes from Whitefish, Montana. And no, you can’t have her number.