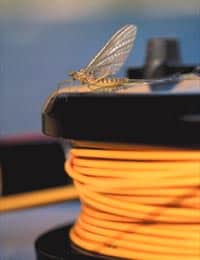 Ephemerella grandis is, like the rest of us, a sex fiend. From the moment he sheds his heavy, heinous body of youth, his thoughts are dominated by mayfly fornication-drake nookie, if you will. He can’t sleep. He can’t eat. He can do nothing but flutter about on the breezes of desire, looking above the river for his one true love-or, if he’s lucky, a couple of them.

All creatures are, in a way, sex fiends. They must be at some point simply to keep their species in the game. But E. grandis, commonly known as the Western Green Drake, pays one hell of a price for it. He is the All Star sex fiend-for after he does the deed, he’s done. His life is over, and we don’t mean figuratively. No wonder he does it in midair. The poor guy has no friends when he begins his courtship, surrounded as he is by dozens of others with the same goal-sorta like guys in a ski town. Grandis boy figures, and rightly so, that his acquaintances, all just as sex-crazed, would stab him in the back before they’d help him get laid. Grab a lady and make it happen-that’s the name of the game.

His is the typical mayfly life: Parents died when he was only an egg so the poor little orphaned bastard crawls around in the mud for a few months, then, after struggling on the surface to avoid being eaten while simultaneously shedding his skin (the equivalent of peeling off wet, half-frozen neoprenes beneath a crouching cougar), he gets to go sit on a branch, perform the getting-out-of-the-neoprenes trick again, then try to score while 1,000 others in his prenuptial mating swarm try to do the same thing. He’s oblivious to most of this, of course, what with his mind in the gutter and all. (Incidentally, Mr. Mayfly is the only insect on earth that sheds his skin a second time after developing working wings.)

Once he hatches from the surface, he flies dangerously down over the current seam, risking translucent wing and tail filament, dodging bank swallows and dragonflies, gazing across the scum of backwater or under that bush, looking for love in all the wrong places. For in those places are the lairs of fat trout, who don’t give a damn about the mayfly’s need for procreation. They’re just hungry.