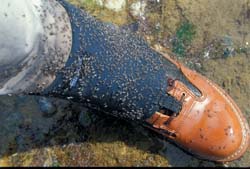 It’s an orgy that would have made caligula jealous. an unusually warm mid-may day filled with frenzied lovemaking, the participants’ bodies locked together coupling with a purpose, oblivious to all that surrounds them. Onlookers are left to gape in wonder as caddisflies in every shape, color, and size procreate with an intoxicating intensity. My riverside campsite, tucked in at the end of a rugged dirt road, provides an unmatched view of the broad Yakima River and surrounding cliffs. A large cottonwood tree in the middle of the site offers blessedly cool shade in the afternoon and a place to hang my waders at night. The tree also serves as a boudoir for the amorous insects that wander anxiously about its new spring leaves. Caddis cover everything within 20 yards of the river – tent, car, cooler, camp chair, legs, arms, head. Many are joined at the abdomen, sometimes in threes and fours, crawling everywhere.

A trio of female redwing blackbirds gathers nearby and casually picks off the bugs scampering across the dusty ground. They feed nonchalantly, eyeing the smorgasbord with a casual interest, snatching only the biggest and fattest.

Bright yellow finches chase each other across the broad, slow-moving river. They appear as yellow streaks, flying haphazardly, as though trying to dodge the bugs that fill the air above the water. Conspicuously absent are the swarms of swallows that usually pour from cliffside caves when a hatch explodes. Perhaps they’ve already swallowed their fill, as it were, and instead rest in the cool shade of their mud-spun homes. I watch the water for telltale signs of feeding trout – a splash, a dimple, a nose edging above the waterline. The trout feed above the surface consistently but without urgency, as though, like the blackbirds, they are bored. Or, perhaps, they, too, have had their fill.

In April, when the river finally warms and the brown drakes hatch every afternoon, even the biggest, most wary rainbows and cutthroats greet the giant mayflies’ arrival with a certain feral savagery, feeding like hungry wolves on an elk carcass. Perhaps they know that the hatch occurs for only a couple hours each day, that it lasts for only a few weeks, and that future meals will not be as large or as easy. But in mid-May, there is no two-hour caddis hatch. It’s a storm that lasts for days, wave after wave of caddis bursting forth from the water, while the recently laid dap their backsides into the current, depositing eggs.