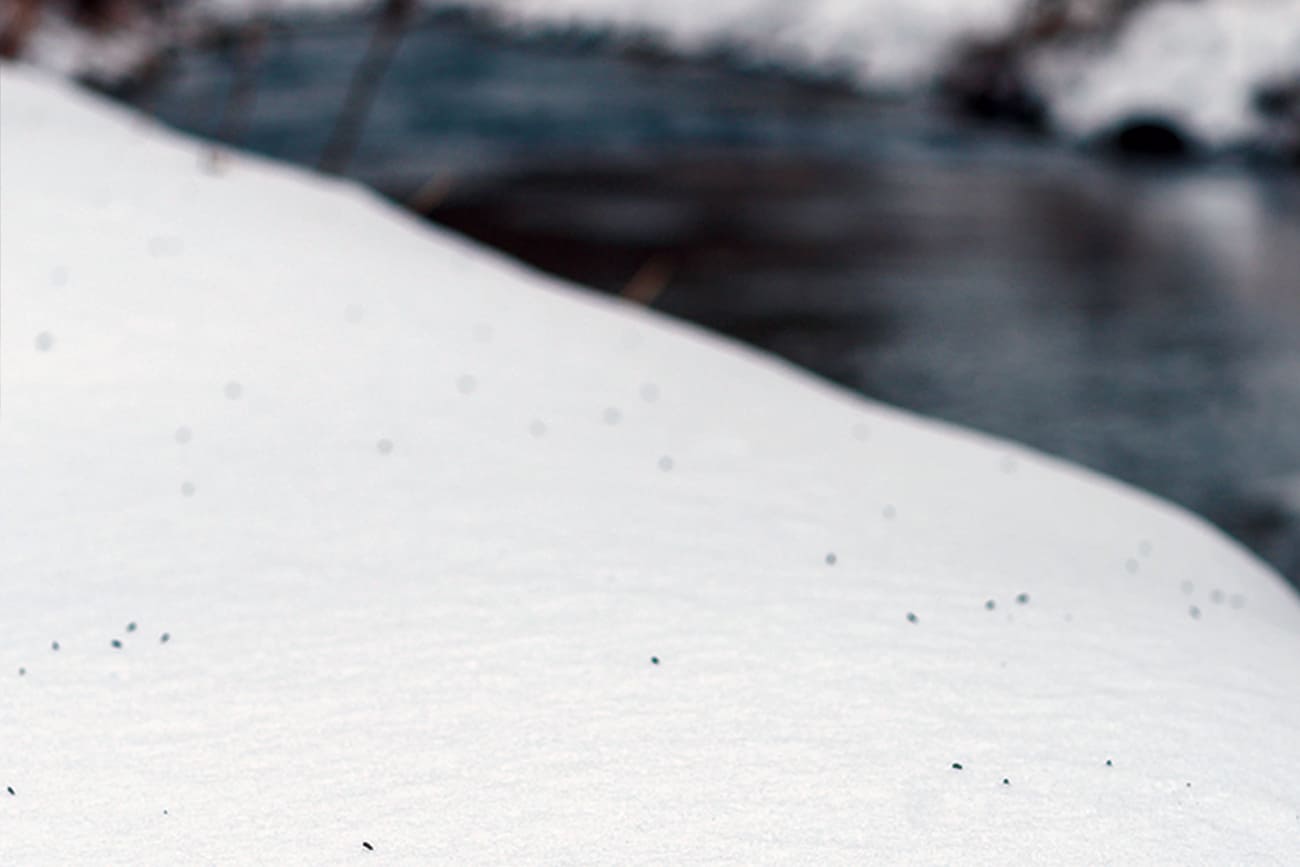 Trout fishing in northern Minnesota in the summer is a good way to inhale a lot of bugs. Same for splitting wood, or cutting the grass, or any other sweaty, breathy work. Supposedly, my great-great uncle had a line for this, whenever one of the kids was choking and spitting on a mosquito:

“Nothin’ so small that it doesn’t have a little bit of grease in it.”

Southern Minnesota in January is nothing like northern Minnesota in June, but I’m thinking of that grease today, watching tiny black midges crawling along the riverbank snow crust. Upstream is a riffle, and in the slick below it trout are rising subtly, presumably eating the midges, which are not mosquitoes but it seems reasonable that they are similar in grease content.

My rod is tucked under my arm and my hands are stuffed into my wader front. I’m knee-deep in the black water, shoulders hunched, fleece gaiter frosted with breath. The ceiling is low and grey. I haven’t seen a rising fish since September. I should cut off the indicator rig and re-tie with 7X and a Griffith’s gnat and try to catch one. But my hands are cold and my fingers twinge at the thought of touching the zipper pulls, nippers, the fly box, and the plastic clips I have to undo to swing around my sling pack. Then I’d have to tie the knots, and maybe even handle another wet fish.

I’ve already caught a few trout. Wild browns, here. Old lineage. Skinny and starved looking, slow to recover after the fall spawn. They’re stacked in the deeper trenches and highly vulnerable to a beadhead nymph of about any name, so long as it has some pink in it, in about size 16 drifted under a bobber. They take gently for the most part, just delaying the indicator rather than jerking it. As if the water were molasses-thick with cold.

I try not to touch the fish. Of course it’s bad for the them, but mainly I don’t want to get my hands wet. The little curved nymph hooks rarely shake loose in the net though, so wet hands and wool gloves are a rule. The water is barely above the freezing point. Maybe below, but kept liquid by motion. It seems strange that the fish is the same temperature as the water. But how else could it be?

A winter trout in the net is a shock of color. The Driftless landscape’s summer green is so drab now: greys, matte tans, and occasional blackish conifers. Same for the monochrome winter cityscape I’ve escaped to be here. But the brown trout is living gold, and the blood-red spots and gills, the mother-of-pearl blue cheeks, seem unreal. Like the pop of color in an otherwise grayscale photo. Or flecks of raw gold in a muddy pan.

My raggwool fingerless gloves are crusted with ice but still soft inside, like a glazed doughnut. They crackle delicately when I flex my fingers to gain back a bit of feeling.

I’m not unused to the cold. It’s only been a few weeks since my last sit in a tree stand, which is a whole other kind of freezing: motionless hours seated on expanded metal while gripping an aluminum bow. Nor am I unused to winter fishing. It’s just usually through a hole in the ice.

But this Minnesota open-year-round trout water, to a northern Minnesota native, is a little unsettling. I’m not sure what to think. Last winter I fished a Driftless stream near the Twin Cities with local guide Aaron and his pal Charlie. Aaron said that this was one of his favorite times to fish. Partly, he said, it’s because there are so few kayakers or other anglers. “But also because the fishing is more simple,” he said, raising his ten-foot nymph rod into the jaw of another teninch brown.

Trout fishing is usually a puzzle of some kind. Sometimes it’s a Rubik’s Cube, but there’s almost always a solution, and if you can figure it out, you catch fish. In the winter it’s more like a toddler’s six-piece wooden cutout. Attractor nymph or small woolly bugger drifted deep. You probably won’t catch the biggest trout of the year or the most fish in one day. But like Ellsworth says to a frustrated prospector in HBO’s Deadwood: “Twixt nuggets and nothin’ she’s usually gonna show you some flake.” By January I’m usually ready for some flake.

The pod of trout is still rising. Barely breaking the slate surface, just dimpling. I back up to the bank and sit heavily into the snow and unclip my sling pack and swing it around and fumble with the zippers and nippers and tie on a length of 7X and a Griffith’s gnat. I cram my wooden fingers back into the wader pocket for a bit.

The overcast has begun to break and shafts of afternoon sun break through. The water before me goes from black to luminous green. The same color it is in summer, when clouds of caddis boil in the eddies, and grasshoppers carom wildly in the sedge grass. I actually feel warmer for a moment.

The clouds return and the water goes dark again. I lurch back to my feet and false cast a few extra times to loosen my arms before laying the cast down. The line is freezing in the rod guides but soon a dimple forms about where my gnat probably is, and I set the hook. A fourinch trout splashes back into the net. A little flash of metallic gold. And surely a small bit of grease.

[TOM HAZELTON is a freelance writer and editor based in Minneapolis.] 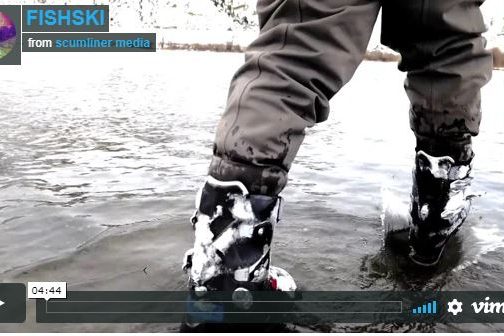