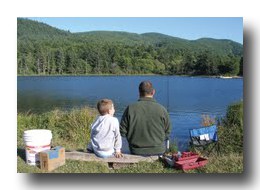 We all gotta start somewhere…

Of all the letters we receive at The Drake, none is more common than those written by sons or daughters or grandchildren, telling us how either their dad or grandfather introduced them to the sport. You know the image: Friendly-faced, white-haired grandpa standing ankle-high in a river, helping his grandson cast. You know the image because it is used to sell everything from time shares to mutual finds to watches we can¹t afford. But strip away the gloss and you get the truth: Flyfishing is an inherited sport.

My own father worked as a commercial halibut fisherman in Alaska in the late ’50s and early ’60s. And, like a lot of commercial fishermen, he never quite got the whole “fishing-for-fun” concept. But he understood that I did, so he always made time for it, even though most days he would’ve rather been home watching baseball.

From the time I was nine or ten, up through my mid-teens, my father and I had sort of an unwritten rule come Saturday mornings: I would get up early and help him cut and haul a load of firewood from the ample clearcuts of Oregon¹s coastal range, and he would wait patiently afterwards while I tried to catch sea-run cutthroat or steelhead from one of several rivers flowing through the Siuslaw National Forest. Most of the wood-cutting took place in the fall, but when spring came, we¹d take the little wooden boat we built and chase crappie, bluegill, and bass on the Willamette River or local farm ponds.

For larger family outings, there was usually a gathering of relatives drawn together by a shared love of fishing, camping, and beer-drinking in the Oregon outdoors. And though both of my grandfathers passed away when I was young, my sister and I had a surrogate: Uncle Oscar.

Oscar Mueller was the patriarch of an extended West Coast clan that stretched from Southern California to Alaska. Thirty years ago—already in his 60s—he would backpack with us deep into Oregon’s Eagle Cap Wilderness. We’d spend every Memorial weekend on the Nestucca and every Labor Day on the Deschutes, and through it all there was Oscar: Blazer fan, Beaver fan, fisherman—up first making coffee, or up last making us laugh around the campfire. I never saw him in a bad mood.

Uncle Oscar died this past November at the age of 93. He went gracefully, in his own bed, asleep. I saw him earlier on the day he died. He was weak and didn’t have much to say. But as I got up to leave, he slowly whispered: “Keep… (deep breath) fishing…”

Three hours later I was on the John Day, remembering a great man.