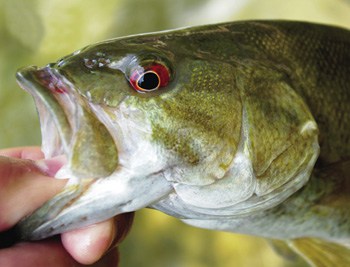 You would hear the hum of the dirt track four miles from your house on Friday nights. The sound would somehow travel all that way through the absurd continental humidity. It would be eighty five degrees at ten p.m. You would sit on the porch and drink beer and suffocate.

The next morning you’d wake up and have coffee and eggs and get in your car. Because you’d be driving with the windows down in the summer in southern Indiana, it would feel like getting hit in the face with a wool blanket. The haze would hover over everything: the rolling fields, the wooded uplands in the distance. You’d be wearing blue shorts and a grey t-shirt, sunglasses and a hat. You’d put on your shredded booties and pull what was left of the gravel guards over the tops of your wading boots.

The slick limestone river bottom would be creased here and there by tiny ledges that crayfish attempt to back under when you get too close. They would squeeze themselves in and get as small as possible. At the top of this flat stretch the creek would jog sharply to the right under a sheer rock wall twenty feet high and on the outside of the bend there would be a hole about four feet deep and ten feet long with a large fallen tree and some boulders in it.

You’d strip line from the reel and make big, open loops and drop your heavy olive streamer in the hole, ticking the bottom and stripping the fly back slowly. Another cast, another retrieve. Another cast, caught in a tree. You’d break your fly off and, in frustration, tie on something big and chartreuse. Enough of this ticking and jigging you’d think, you’re a goddamn American and it is your right to strip this fly as fast as you can along this log until you make whatever it is that lives down there so pissed off it has no choice.

You would cast the fly up to the head of the hole, strip it fast down the length of the log, and just like that something barred and olive and gold and really angry would come out and grab it in an explosive arc, the big blocky tail beating rapidly in retreat. You’d rip the fish out of the hole and take a few steps back so fast you’d lose your balance and almost fall down. You’d probably look like an idiot but no one would be watching. You’d keep a short line on the fish in the shallows and he’d buck and dive and buck and dive. You’d drop the rod tip to the side and turn his head away from the wood. After half a minute he’d be pretty tired so you’d reach down and put your thumb in his fat mouth, pinch his lip and hoist him up for a look.

He’d be fifteen or sixteen inches long and thick like your girlfriend who doesn’t mind that you fish every day. He wouldn’t be the biggest fish in this little creek, but he’d be a fine fish nonetheless.

Around three in the afternoon, tall, torn, and jagged clouds would roll overhead and it would get quite dark. There would be a bit of soft, rumbling thunder in the distance and maybe a sharp crack or two nearby. The first rain drops would come one at a time as giant, swollen globs of liquid that splatter violently on rocks and your shoulders. You’d probably huddle under a tree for a few minutes as the heavy rain came and went. Almost immediately the sun would shine hard and there would be the fine smell of rich soil. Steam would come off the rocks and the deep green leaves. Some of the holes in the creek would take on that milky limestone aquamarine color. You would trip over an old engine block on the river bank and scrape your shin up pretty good.

Matt Dunn recently moved to Michigan where he guides on the Pere Marquette River with Indigo Guide Service. He runs Fishbeer.com and Thirdcoastfly.com and prefers craft beer out of a can.