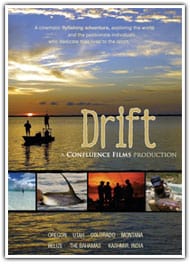 By now, thankfully, a number of quality flyfishing films have been produced. Some have been very well made, but were a little too short without a broad range of subject matter. Others have been long, only to have you wishing they were shorter. And others have had decent storylines and characters, but appeared to be filmed by your nine-year-old sister as she was dribbling her soccer ball. They have all been encouraging and unique in their own ways, but none have successfully integrated the five major pieces of a flyfishing film: great characters and personalities, cinematography, music, a variety of freshwater and saltwater, and an adequate supply of what we all like to call fish porn. Confluence Films aims to change that with Drift a full length production scheduled for release in mid-September.

The film is aimed at showing all viewers from hardcore, 300-day-a-year guides, to people who have never picked up a fly rod that flyfishing is a much deeper, more interesting, more varied, and a more fulfilling sport than they have been led to believe by mainstream media, particularly the more traditional fishing magazines and television shows. Drift will do this by highlighting some of the sport’s more colorful characters and destinations, capturing these stories on location with the best shooters in the business using the best medium known to man â€” film. That is important to mention, as every fly fishing movie and video project to date has been shot on video. Drift will be the first ever feature-length fly fishing project shot entirely on film.

How many times have we all heard this complaint about a particular project: “Great concept, but poor execution.” No business is perfect, so there will always be the threat of a certain amount of flawed execution, but what we’ve seen so much in the past with flyfishing films is a sort of “ready, fire, aim” approach to the planning process. And as any business owner or project manager knows, ideas are the easy part. The difference is in the details, and the three partners in Confluence Films have at least 20 years of experience each in their respective roles for Drift’s writing, directing, filming, editing, producing, planning travel and arranging logistics. They have each run their own successful businesses and know the importance of details in putting together a great final product.

Drift will combine all the necessary elements to result in the first full-length, high production-value, multi-destination flyfishing movie ever made. “Setting the bar” is an overused term in all industries, but we are indeed aiming high and we trust that both viewers and sponsors will be happy with where we land.