Wisconsin, the epicenter of all things loaded in hops and lactose, is now also the place to crash your car in an apocalyptic Hex hatch.

Reports of mayfly-induced accidents continue to make the rounds after the National Weather Service last week recorded a mega hatch over the Mississippi River between Wisconsin and Iowa and into Minnesota. Several husbands have also been added to the Midwest Missing Persons Registry—all last seen with glazed over eyes and fly rods in hand.

“As they rose from the river banks to mate and lay eggs, they not only formed a cloud big enough to appear on the weather radar, they died in piles as deep as two feet. There were enough dead flies to cause a three-vehicle accident on the highway, as the bugs, attracted by streetlights, were crushed into a winged slime. Two people were injured when a car slid on the fly slime into another car, and then hit a van.” 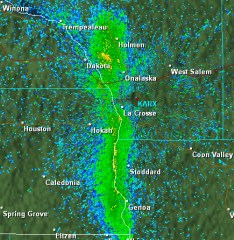