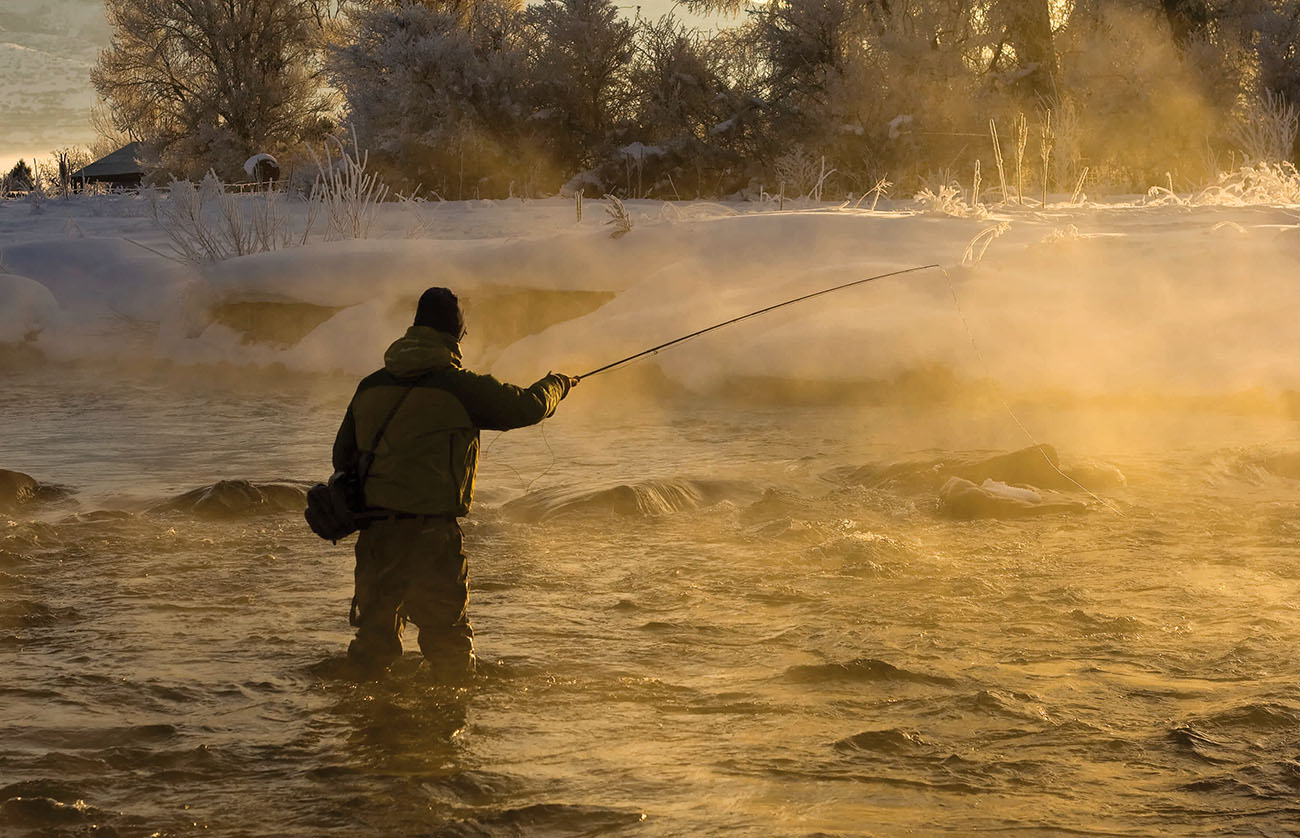 When getting outside requires some extra effort by Ryan Sparks

It’s late February and I stumble out the door to grab another beer kept cold by winter’s free refrigeration. If it was anything but the high-octane variety, it would’ve frozen from a lack of alcohol.
I pop the cap, drain it, and unzip my pants, melting as much snow as possible when I piss—anything to help usher spring on its way. It’s small victories like this that keep me sane. If I had a flame-thrower, I’d set this whole frigid wasteland on fire.

We’ve had 53 inches of snow in February. That’s an entire winter’s accumulation in a single month. It hasn’t been above freezing since December, and every flake that’s fallen is still on the ground. I’ve been stuck inside for weeks. I grab another beer. This is winter in Minnesota: Put your thoughts on ice, pickle your liver, abandon all hope ye who enter.

If you live in a state without fishing seasons, a nip of bourbon is a great way to celebrate a fish.

In late summer, winter seems romantically attractive. Staying inside and warming yourself by the fire with a glass of bourbon and a good book sounds like a welcome change of pace. I tell myself I’ll refill my fly box, organize my equipment, and clean my fly lines. But then winter arrives, and I start checking days off the calendar like an inmate. Fishing quickly turns from being a part of daily life to a distant abstraction.

The hardest part of winter isn’t the cold; it’s the effort that goes into dealing with it, both physically and mentally. In summer I can walk out the door in whatever I’m wearing. Now, my fishing garb fills an entire closet and takes fifteen minutes to put on: thin base-layer socks, heavy wool over-socks, a light pair of thermal underwear, fleece bibs, sweatpants, two thermal shirts, a hoody, down coat, rain jacket, fingerless wool gloves, mittens to put over them when my hands have turned numb, a wool scarf knit by my mother-in-law, cloth ball cap, a wool stocking hat also knit by my mother-in-law, waders, and finally, wading boots. By the time I’m finished I’m 20 pounds heavier with the mobility of a sloth. Even with all the clothing, waving a rod in the air isn’t enough to keep warm.

By my count, I’ve broken four rods during wintertime. One from slamming it in the truck door, and the other three from the ice that accumulates on the rod tip. Eventually, it gets too heavy and you hear the dreaded snap, knowing it’s no one’s fault but your own. When it gets particularly frigid, say -10 or colder, ice encases your fly line as well as your rod. It’s like trying to cast lead-core trolling line, and even wearing all those layers, it stings if you whip yourself.

In grad school, I shared a cubicle with a hardcore ice-climber. Once, when I asked how his weekend had been, his response baffled me. “Awesome climb on Saturday,” he said, “but it gave me the screamin’ barfies for an hour.” I didn’t ask for clarification; just wrote it off as some cultish ice-climbing ritual. Then, on a Superbowl Sunday visit to the Missouri River below Holter Dam, I forgot my gloves and decided I hadn’t driven two hours from Bozeman for nothing. I fished with numb hands for hours before returning to the truck to warm my trembling fingers. Turns out, when your hands thaw after an extended period of extreme cold it feels like a thousand needles jammed into your skin. I did exactly like my office mate had described. I howled, rolled down the window, succumbed to the pain, and lost my lunch.

And that’s just the physical aspect of winter. Its truly heinous qualities are psychological. There’s no escape—just the four walls of your house, and the inside of your head. There is ice, and some demented souls go ice fishing. I’ve tried it, and can testify its only saving grace is that—after drilling dozens of holes through a foot of ice—you’re exhausted enough to sleep at night. If you tag along with the locals, you’ll soon discover that it’s really just an elaborate excuse to drink, which I can do at home on my own.

In winter, alcohol helps whether you’re fishing or not. If you live in a state without fishing seasons, a nip of bourbon is a great way to celebrate a fish. If you get skunked, it’s an equally excellent way to drown your sorrows. When fishing isn’t an option, drinking goes well with tying, particularly when you need dry flies that won’t float and streamers that won’t sink.

“Arts and crafts again?” my old roommate would ask, as he stumbled home drunk and found me in a similar state, hunched over my tying desk. I took a shower once and found a wad of copper flash wedged in the crack of my ass. Another time, I passed out at my tying desk with a cigarette in my mouth, spilled a vile of Sally Hansen’s, and lit my desk on fire.

The first days of spring can hover at the end of a ten-day forecast for a long time.

The first days of spring can hover at the end of a ten-day forecast for a long time. Last year, on March 28th, the forecast called for a high of 64, overcast skies, and a chance of rain. I planned a trip to a small creek not far from my home. The night before, I packed a lunch, organized my gear, and neatly tucked everything in the cab of my truck. The next morning it was snowing.

I went anyway, driving through the squall while listening to radio people talk about it. When I reached the dirt bridge that crossed the creek, it was still snowing. I put the truck in park and got out to look at the water, though I don’t know why, because I was going to fish it regardless. There was some ice clinging to the edges, but where the stream was open it was running low and clear. I pulled the truck onto the shoulder and strung up my rod while the falling snow covered my tire tracks.

The wet snow crunched under my wading boots as I hiked past ghosts of oak trees and the staggering rock formations the Driftless is known for. When I came to a deep pool cut into the side of a rocky outcropping, I made a sloppy cast that landed my midge toward the back of the pool. I frantically stripped slack line to regain control as it swung downstream and a brown trout plucked it off the surface. In a tangle of line, I stripped the fish to my feet, admired how it seemed to be thriving even during one of the harshest winters on record, and then sent him on his way. With a single slovenly cast, the cage that had surrounded my mind the past four months melted away in the afternoon sun. 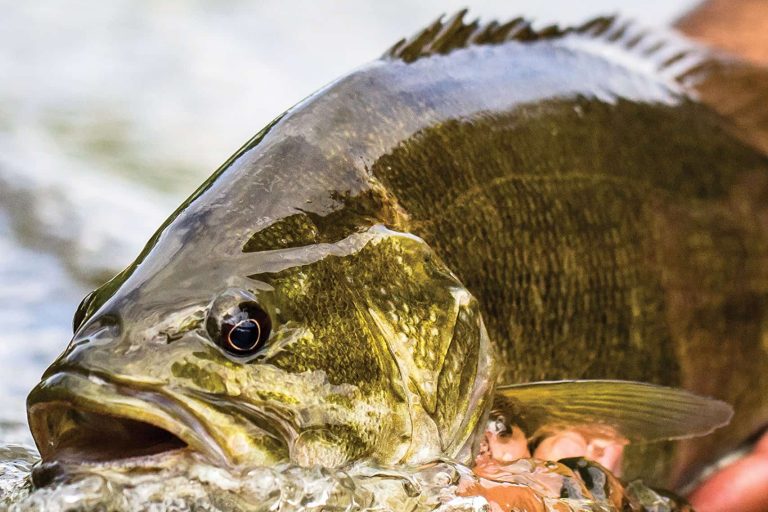 Winter Steelhead from Way Up