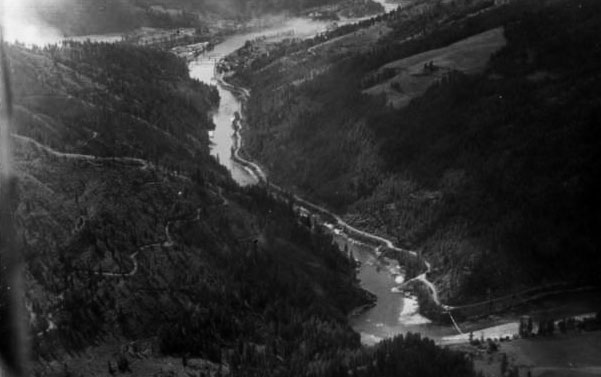 Once home to the largest steelhead in America, what would the North Fork Clearwater be like if Dworshak hadn't been built?

Waters of Idaho’s North Fork Clearwater River once flowed freely to the Pacific. Cayuse Creek dropped from a high-elevation meadow into Kelly Creek, which funneled into the North Fork, which melded into the Clearwater proper, then the Snake, and finally the mighty Columbia. Native steelhead muscled upstream through it all—massive populations of massive fish during pre-dam years.

In 1972, Idaho’s 700-foot high Dworshak Dam ended those journeys forever. And when a young Steve Pettit returned home from Vietnam to attend grad school at the University of Idaho, he piloted a $13-per-hour rental plane over the unfolding scene as part of his fisheries research. The view from the cockpit was morose. He describes a forest evaporating into tree-trunked hillsides. Pastoral land, peppered with log cabins built on a bench above the river, swallowed whole. And North Fork steelhead, erased.

“When they dammed and destroyed the anadromous fish-access to that country with Dworshak, they wiped out what was, in my opinion, the greatest natural spawning race of steelhead on the planet,” Pettit says. “It’s a population that was scary big. I don’t know of anywhere in the country that had anything close to that productivity.” The North Fork produced 90 percent of the Clearwater’s native B-run steelhead—fish that averaged 16 pounds, topped out at around 30, and swam in runs of 20,000 to 40,000 according to counts from the late 1950s. In the spring of ’58, a five-mile section of Cayuse Creek held more than 2,100 steelhead redds. But during that era, productivity was not necessarily weighed in wildlife abundance. Instead it was measured in “progress,” and progress plowed ahead with the construction of dams.

Ramming dams down the throats of constituents was standard protocol for taxation-rabid politicians during the early ’50s. But Orofino, Idaho, mayor A.B. Curtis hit a developmental snag when native steelhead proponents warned that a dam on the North Fork Clearwater wouldn’t fly without a fight.

The debate that preceded construction of Dworshak has been recently preserved online and made public via the University of Idaho’s Special Collections and Archives. The Dworshak Dam Collection swirls with hundreds of letters, newspaper clippings, and related photographs. Headlines label local conservationists, such as Mort Brigham of Lewiston, everything from “propagandists” to “spoiled children.” Brigham was one of a handful leading the pro-steelhead charge. Others said the dam would destroy winter elk herds in the basin. In the end, all of these predictions proved right.

On the other side, Idaho political columnist John Corlett reported that, “…several industries have a greater stake in Idaho than the sportsmen.” And, “It has been demonstrated in Southern Idaho that dams and fishing go together quite well.”

Brigham, then president of the Lewis-Clark Wildlife Club, is evident throughout the archive. After congress approved Dworshak construction in 1962, he called the deal a death warrant for North Fork wildlife: “The steelhead run up the North Fork will be wiped out. This means almost total disaster for the whitetail deer and undetermined but heavy damage to one of the finest elk herds in the United States.”

Brigham’s voice drowned in 1972 when millions of yards of concrete dried and Dworshak Dam, Reservoir, and National Fish Hatchery became a reality. Thanks to this prolific archival collection, his message has been resurrected in a new era of progress—where what went up might eventually come down.

To view the University of Idaho’s new Dworshak Dam Collection, go to www.lib.uidaho.edu/digital/dworshak/