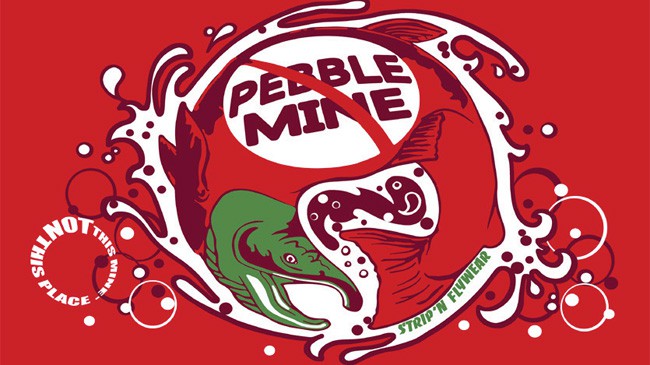 THERE WAS A TIME when skateboarder-turnedgraphics- creator Dave Hartman excelled at the art of being aimless.

Bucking the law and generally lacking purpose, Hartman bounced from home to home in suburban Arizona and California, rural Alabama, and southern New Hampshire. Until fishing intervened. He found a fly rod and carried it to Montana. And there he dove into the tactics of what makes humans falter and function. A degree in social work followed. And for the past 15 years Hartman has coalesced with the imprints of a former self—counseling troubled youth at the Montana Academy in Kalispell, on the outskirts of Glacier National Park.

“Instead of being a self-centered teenager, I found a new purpose,” he says. “It was to be on the water as much as possible, while studying to be a person outside myself—focusing on others, as opposed to just me.” 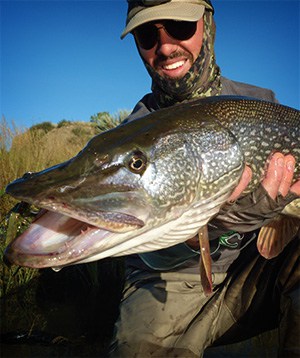 Narcissist. Anarchist. Punk. The 40-year-old has been labeled all of these. But he’s never felt comfortable with the term artist. Take his “some serious abduction shit” piece as a prime example. It starts with a meandering river and mountain spires converging under a crescent moon—standard, artsy stuff. But it quickly goes mushroom-trip awry, with stylized trout wasting mayfly insurgents via glowing green laser beams. This jolt of anti-art pulses through Hartman’s oddly awesome portfolio, which has gained traction with a growing list of clients.

“We were introduced by a mutual friend after I first saw his ‘No Pebble’ stickers for Bristol Bay,” says Dave McCoy, of Seattle-based Emerald Water Anglers. “I thought they were new and edgy. They also struck a chord with part of the flyfishing community that nobody else was targeting.” 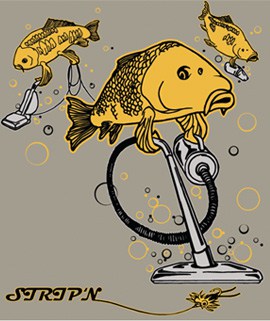 McCoy asked Hartman to develop a logo for his new fly shop, and gave the designer carte blanche to create a “ying-yangy thing… with a steelhead and a sea-run cutthroat… with maybe the Space Needle… and Mount Rainier. You know, not too much to squeeze into a five-inch space,” he says.

Hartman wrapped his noggin around McCoy’s brain-dump and began spinning the elements into something coherent. He sent back a rough sketch on a crinkled napkin, nailed a certain Pacific Northwest vibe, and impressed his client. And that straightforward formula seems to be working. So much so that Hartman will retire from social work this year, parlaying his Photoshop and Illustrator skills into a full-time gig under his Strip’n Flywear and Fly Water Studios brands. 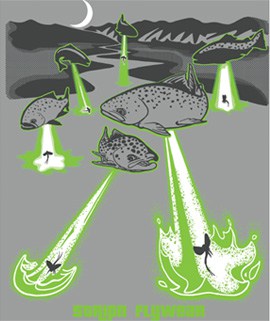 Strip’n Flywear specializes in t-shirts, hoodies, and hats sold in limited-edition batches. A portion of all proceeds is earmarked for protecting threatened fish habitats, such as the sockeye-rich waters of Bristol Bay. But even before Pebble Mine came into the picture, conservation had always had a place in Hartman’s doodles. His move to Montana in the mid-’90s coincided with the arrival of the 7-Up Pete Joint Venture on the Big Blackfoot River, near Missoula. Ready to cyanide its way to riches, the mine was defeated. Stakeholders in the mine, however, fired back and sued the state for $70 million. 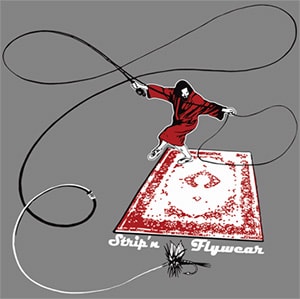 That outcome is one Hartman wants to see avoided during the late innings of the Pebble Mine standoff. His No Pebble shirts, with the classic slash-thru logo emblazoned across a bent-in-half sockeye, have already helped raise thousands for the anti-mine cause. Plans for a new t-shirt push and statewide sticker-bombing efforts are also primed to detonate soon.

“As a graphic artist, I love the idea of people throwing up my art all over town,” Hartman says. “It’s similar to tagging, but more on a motivational and inspirational level.”

The ultimate goal is to be a catalyst for the kinds of changes that deliver good. And through mediums as simple as stickers, t-shirts, and thought-provoking graphics, this retired social worker is still working the social platform—ensuring that this thing we call fishing has a lasting voice.

View more of Hartman’s work at flywaterstudios.com and stripnflywear.com. For every No Pebble shirt sold, $5 goes to the Sportsman’s Alliance for Alaska.