Seattle is a fishy place. With the Puget Sound in its backyard, the Olympic Peninsula three hours west, and sneaky creeks within striking distance due east, you’d think that in addition to espresso factories on every corner it’d be easy to source a fly shop. But that hasn’t always been the case. Until now. 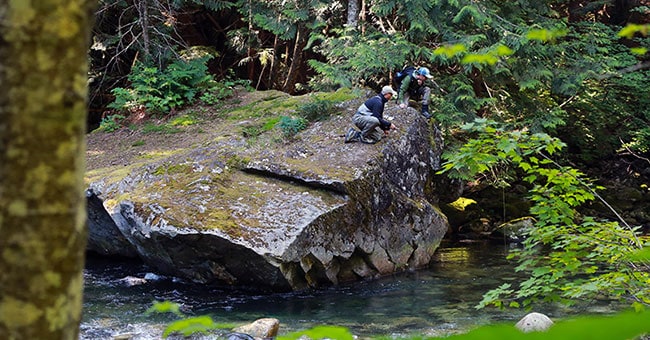 “So far year one is going to exceed robust plans we’d hoped to achieve,” McCoy says. “We’ve been hustling.” 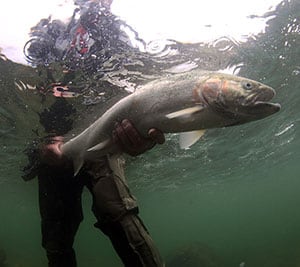 McCoy began his guiding career in the mid-’90s, in Vail and Telluride. From Colorado he migrated to Oregon, eventually moving to Washington just prior to the Endangered Species Act listings that shackled salmon and steelhead fisheries up and down Puget Sound.

Several top regional guides exited the scene, anticipating the impending shitstorm. McCoy stayed the course, navigating some “thorny local politics” and growing his guide service, sans store. With a boat littered driveway and a garage oozing used waders and other paraphernalia, a fly shop was a natural progression. The timing has been apropos.

“With the shop, we’re really just trying to get people excited about going out and flyfishing again,” McCoy says. “What we constantly hear, at least in our neck of the woods, is that anglers want better service. They don’t want to be talked down to, or ignored. Here it’s the opposite. We don’t own any of the water we guide and information flows freely… and for free.” 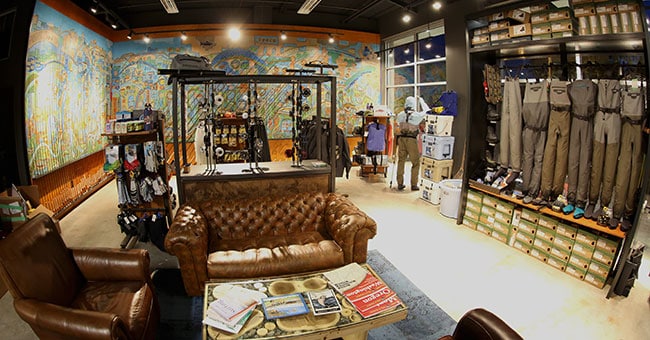 In addition to friendly and gracious good advice, Emerald Water delivers something distinctly Pacific Northwest. Inside the modern boutique a mural by Chris Haberman, Portlandia creative director and art director for the McMenamins chain of tap-and-handle establishments, tells the story. The piece was envisioned to be a simple map of regional steelhead rivers. But Haberman, after spending months interviewing staff and local fishing fiends, elaborated on the theme, creating a massive montage of stylized on-the-water experiences.

Rich Bachelor and his team at Blackmouth Design, on the other hand, designed and built the shop displays from reclaimed industrial steel, all hand-rolled and -polished. Although much of the merchandise showcased caters to coastal steelheaders, the shop and its wares also pay homage to area fisheries of less renown. McCoy and his staff target sea-run cutts in the local brine and are adding stand-up paddleboard (SUP) trips to the lineup. From the OP to the forks of the Snoqualmie River, “We’re just trying to embrace everything the region has to offer,” he says. “And that includes some nontraditional aspects.” 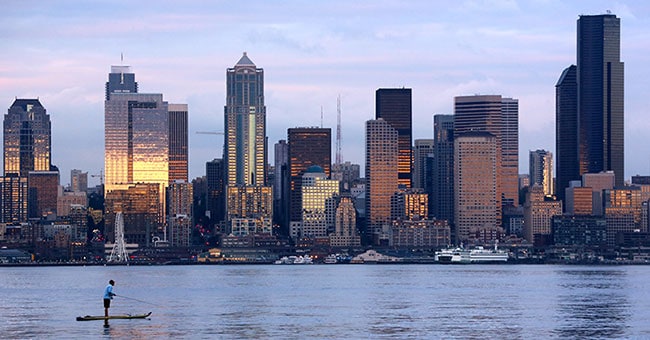 Unorthodox fishing options extend to Emerald Water’s travel business, as well. At the time of this writing, McCoy is exploring Bhutan for a new film highlighting adverse implications of damming pristine waters flowing from the Himalayas. During the next two years, the shop will also host trips to Cuba, Alaska, Belize, Honduras, New Zealand, Greenland, Iceland, and Mongolia—to name a few.

Repeat clients and new, McCoy says, appreciate that diversity. And with a 120-inch flat-screen projection system in the new shop, they can kickback on a leather couch, catch a demonstration, and dream.