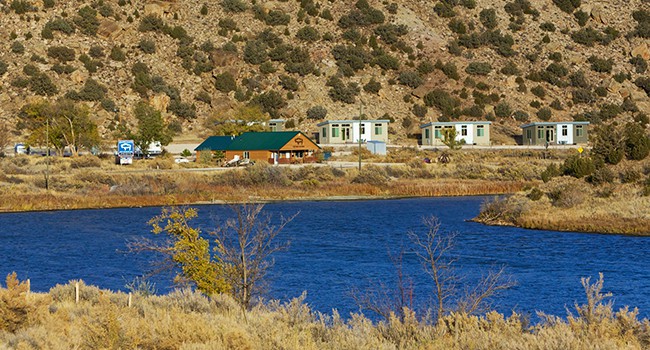 Scratch deeper, however, and acquired-taste aesthetics don’t matter much because of the fishing that lives just across the street.

Browns, rainbows, and a few cutts populate three big-fish ditches here: the Grey Reef, Miracle Mile, and Fremont Canyon tailwaters—all part of a regional North Platte system of rivers pinched between sprawling reservoirs. Anglers can spread out and fish them through four seasons. And guides from Casper, the comparative metropolis located about 20 miles up the road, and as far away as Colorado, Idaho, and Montana, populate a handful of local trailer-parks and run thousands of trips annually.

The Reef Fly Shop has employed many of those professionals over the years, including current shop owners Trent Tatum and Erik Aune. Tatum was raised in Beaumont, Texas, and moved to Wyoming in 1999 to study fish biology at the University of Wyoming, in Laramie. At that time, the Alcova fishing scene was a mix of crickets and bananas—very few anglers and insane fishing.

“I’d heard about Grey Reef from tight-lipped Laramie anglers,” he says. “And my first Reef trip was nothing short of amazing… me and a buddy, nobody else in sight, and the most ridiculous trout fishing. I was sold.”

Tatum immediately applied for a guide position and was hired by Bret Van Rensselaer, former North Platte Lodge owner. That was in 2000. Between then and now he’s occupied about every rentable, shitty trailer Alcova has to offer.

“Exposed wire, propane leaks… you name it I probably saw it.” 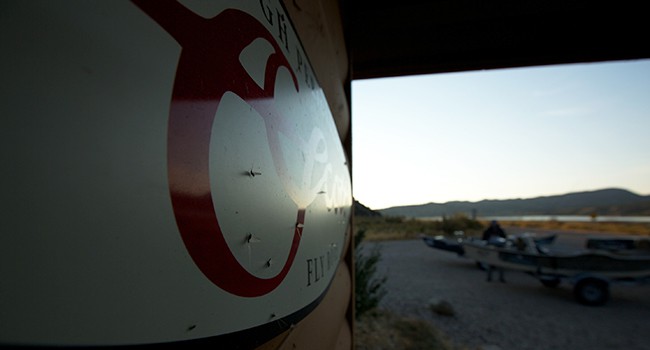 Aune, a Casper native, was one of the shop’s senior guides when he and Tatum met. They hit it off. Several years later, after Tatum returned from honeymooning with his wife Katherine, the two guides combined forces and purchased the business from Van Rensselaer. Since partnering in 2007, they’ve been busy introducing clients to their multifaceted backyard fishery via the fly shop and their North Platte Lodge digs.

The North Platte runs south to north, its freestone stretches starting in Colorado and crossing the state line just north of Walden. The river passes through Saratoga, WY, pours under I-80 near Sinclair, and bellies into Seminoe Reservoir, which marks the beginning of its tailwater reaches.

Below Seminoe, the Miracle Mile shuffles toward Pathfinder Reservoir. Next up, a steep Fremont Canyon terminates in the 2,470-acre Alcova Lake. And downstream of that final impoundment lives the Grey Reef stretch, home to piles of popular float options between Alcova and Casper. This latter section marks The Reef Fly Shop’s home, where it employs 14 to 16 full-time guides from spring through fall. 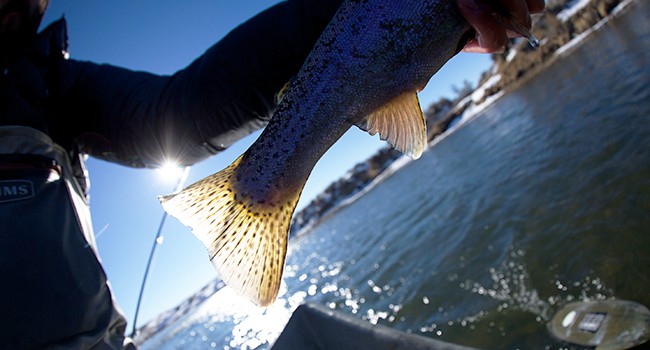 To stay competitive, Aune and Tatum have had to evolve, everything from how they fish—moving from bottom-dredge nymphing to promoting dry-fly and streamer opportunities—to breaking new ground with upgraded lodging, RV, and camping options.

“When we first bought the business, we were a fly shop and lodge, that’s it,” Tatum says. “Obviously with increased traffic, demand for lodging has grown.”

Recent improvements include lodge expansions, a commercial kitchen upgrade, the addition of four well-appointed cottages across from Grey Reef Dam, and new RV/camping sites. With a diversified product, they’re making headway in the Alcova boondocks.

“Being the only true shop on the river, we are everyone’s best friend and we can also serve equally as the asshole,” Tatum says.

“You can’t make everyone happy, as we’ve found out. That said, we genuinely try and help anyone and everyone. We want people to be successful when they come here, it’s that simple.”