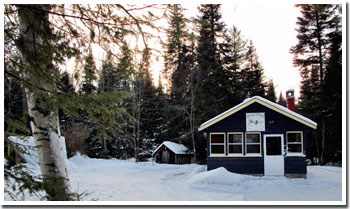 Nestled in snow at the end of a lonely dirt driveway, the supply-stacked 400-square-foot space is a testament to doing business in the Adirondacks. It’s a place, Wilcox says, where specialty service and supplies are essential to serving a vast region and its micro flyfishing market.

“Our customers range from locals to mostly online buyers,” he says. “But I’m also seeing more and more people from surrounding regional hubs such as Plattsburg, and others cruising up from as far as New Jersey and Pennsylvania.”

What drives this clientele base is a common devotion centered on producing some of the best fish-catching patterns in the country. This becomes clear as you stroll through the shop’s front doors and are assaulted by bins upon bins of custom flies flanked by stacks of quality tying materials—everything from capes and saddles to a full range of beads, hooks, threads, and all the essentials to get it done behind the vise.

Building his business on a fly-tying foundation is no surprise considering Wilcox is a longtime signature tier for Idylwilde Flies. His patterns include the JC Special, Superman, VW Hopper, and Microstone. And his shop speaks to that pedigree.

“It’s a shop for fly tyers and fly buyers,” he says. “That’s always been my first goal with it.”

In addition to housing everything a bug buyer or tyer could want, Wiley’s is undergoing spring 2010 expansions with the addition of St. Croix Rods to a list of already in-house brands such as William Joseph, Waterworks-Lamson, Ross, and Chota.

The nearby Ausable River is the region’s prime destination fishery, but like the shop’s off-the-grid whereabouts, Wiley’s specializes in guided trips to area alternatives such as the St. Regis, Salmon, and Saranac rivers. Some of the state’s best brookie fishing is found within stumbling distance, including massive pond systems and innumerable carry routes throughout the park. Warmwater bass and pike options are also prolific.

Check out wileysflies.com for more information.