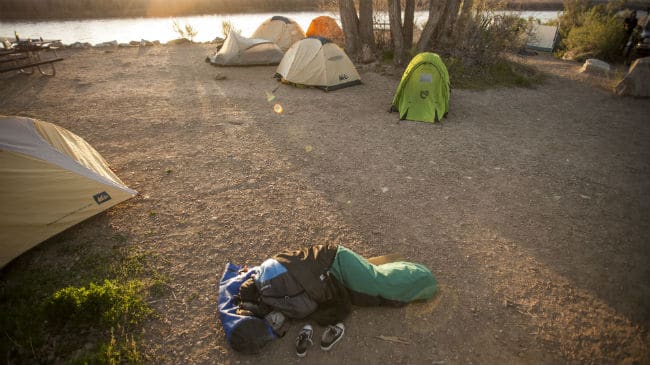 The harsh smells of a hardworking companion

The inaugural unfurling took place four years ago in Yellowstone, on Slough Creek’s high meadow reaches. Plush 650-fill down internals provided a cozy bulwark against the still frigid nighttime lows of early spring. Her rugged inflatable underside took the edge off pointy rocks and smothered knobby roots for a comfortable night’s slumber. While her lightweight performance, plus “mateable-zipper” convenience, ensured long-haul portability, and the allure of sex in the woods.

We’ve traveled far since then, from car camps to backcountry assaults, breathing in our riverside surroundings. But she’s never learned to exhale. She keeps it all inside.

Today’s sleeping bag carries on the tradition of the Euklisia Rug, patented by Welsh mail-order kingpin Pryce Pryce-Jones in the 1870s. Considered the forerunner of the modern mummy bag, Pryce-Jones sold 60,000 units to the Russian army. The British forces, African missionaries, and pioneers in the Australian outback also enjoyed the benefits of what was simply a wool blanket with a pocket near the top for an inflatable rubber pillow. In time, fabric and insulation developments added to the sleeping bag’s warmth-to-weight heroics and escalated its price tag. Sure, a standard Coleman will get you thru an overnighter at your local KOA. But for more adventurous operations, be prepared to drop the equivalent of a night at the Waldorf for admission into your feathery Shangri-la.

It’s a good investment. Sleep comfort following a marathon push into the woods is valuable. But the scents these bags can acquire along the way are even more priceless. And this bag, no joke, stinks. She stinks of campfires under a lid of bright stars. Crusty socks balled up and forgotten in her bowels. Wet dogs seeking safe harbor from cold nights. And she stinks of the organic funk that sparks the senses and reminds us we are members of a living race—one with an appetite to roam free and unwashed.

This bag has been places, too. She’s been stuffed into claustrophobic nooks. She’s lived long nights in a Casper, Wyoming, guide-house infested with cats. Feline stink. Un-maskable and intolerable. She’s smelt better.

At ease in pickup beds or an ancient camper on the banks of Utah’s Green, this bag holds traces of pre-dawn coffee grinds. She’s been scented with deet and citronella, when mosquitoes made its patrons itchy for ample doses. She stinks of overnight floats on Colorado’s North Platte River. Sleepless evenings, too stoned for shuteye. Pine needles. Malt beverages. And charred meat. This bag smells like prairie sage and old books with the occasional caddis mashed flat between their pages.

On Slough she acquired the atmospheric zing of electrical storms coupled with wafts of bacon breakfasts. Pungent wildflowers—lupine, paintbrush, and columbine—mixed with a nose of dried cutthroat slime have made for a fragrant, sometimes frightening mix.

Scents of shitty fishing, this bag contains them. But good fishing can stink, too. The redolence of all those caught trout lives inside as a whiff of smelly pride.

Lately this bag, all 2 pounds, 15 ounces of water-repellant fabric and integrated features, smells like last night’s canned beans. Of gun smoke and wheel grease. Tent mildew and morning dew. She smells of the woman sleeping next to me. And she never smells like hand-sanitizers, exotic soaps, detergents, or inanimate items walled inside a house, constantly gathering dust.

No, this bag smells alive. Curled inside, zipped up, agitated, and potentially flammable, it’s the sweet stink of a human experiment called experience.