About a month ago we received a letter signed by a dude named Matt. He claimed he’d stumbled upon a flyshop so amazing, so gritty, so real, in a state so blessed—or cursed, choose your poison—with outfitters, that we must share it with you.

Sensing the big scoop, we dug deeper. Matt told us that he’s lived, fished, and guided all over the state, has spent a small fortune inside flyshops, and there’s only one, in his experience, that stands out as Drake material: The Otter’s Den in Columbus, MT.

“With great fishing towns like Livingston, Bozeman, and Missoula in the state, a place like Columbus is able to slide along just under the radar,” he expounded. “Kory Kober [Otter’s Den owner/operator] grew up locally, fishing the Stillwater-Lower Yellowstone country and knows it well. His passion for the sport, and for this little corner of the flyfishing world, is obvious to all who meet him. It’s this passion for all things fishy that makes his shop stand out. It’s a fishing shop. Period.”

Delving further into this unequalled den of flyfishing iniquity, it turns out Kober’s philosophy runs loosely around the belief that life is too short to take your waders off. And when we asked him what he was up to this week, he revealed that spring’s first BWOs were stuck to the shop’s windows, and that The Otter’s Den would likely be closed the following day. Along that same vein, Kober’s shop beckons all comers with an, “Open When We Can” sign swaying from its door, something we at The Drake certainly empathize with.

“When you come into The Otter’s Den you’ll likely be greeted by a Labrador nose to the crotch. If you decide to continue after this, you’ll find people playing cards, drinking, and listening to old-school rock,” Kober says. “The place usually smells like beer and wet waders, and if you need assistance, the guy with the “Who farted?” t-shirt will put down the meatball sub and help you in any way he can.

“Knowledge and honesty beats the hell out of image and illusion. Besides, our less fashion and more fishin’ attitude seems to offend all the right people.”

Ummm, yea, what he said. So, with no further adieu, in this latest edition of Flyshop Friday we bring to you, The Otter’s Den. Or as its devoted cheerleader Matt puts it: The Greatest Flyshop in Montana. 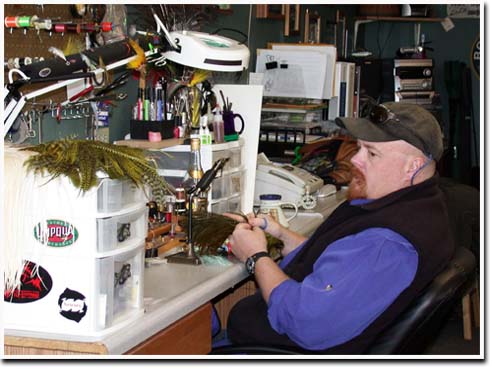 The Drake: When did you first open your doors? And what sparked the desire to own and operate a flyshop?

Kory Kober: I grew up in Columbus and spent my youth virtually living on the rivers. By the time I was 13, I was tying commercially to support my fishing habit. Skipping ahead a decade or so, I did what any young trout bum in this situation would do: I got the nod from an always-supportive wife and a handshake from a somewhat supportive banker.

We opened the doors to The Otter’s Den in the spring of 1999, on April Fools’ Day.

TD: “Serving the Public Since Wednesday…” How did that philosophy come about?

KK: I actually saw that sign at this old rundown burger place in Idaho. It made beer come out of my nose. People are prone to remember a place if you can make them think or laugh.

TD: In a prolific fishing state such as Montana, with many big-name waters and competing shops, how does The Otter’s Den differentiate itself?

KK: One thing that really separates us from the myriad flyshops in Montana is that most of the others are run well and are profitable. Actually, the biggest difference is that we try to cater to the everyday weekend, blue-collar flyfisher. Many of the flyshops out West are geared toward gleaning dollars from the wealthy destination angler crowd. We like those guys too, but our doors remain open because of the loyalty of the locals.

TD: Tell us about the fishing you specialize in?

KK: This part of the state has quite a few fishing options. There are a couple big tailwaters a short drive away. There are some amazing high lakes opportunities during the summer months, but the real draw around here is the fact that we have more wild freestone fishing within an hour of the shop than a person could fish in several summers of trying. (I’ve tried.)

TD: Discuss your brands and why you carry what you do.

KK: We really try to take a “best bang for the buck” approach to our inventory. We only have about 600 square feet of retail space, so we fill it with the essential things that we actually use on the water. I like to reach into my boat bag and show a customer what their new reel will look like after five seasons. This is the kind of firsthand knowledge that makes customers confident in the product.

I also like to deal with companies that are actually trying to compete and not relying on their logo and full page adds to push the product. For example, the rod market has become competitive in terms of warranty wars and advertising dollars spent. This industry has actually managed to convince people that this year’s new thing is vastly superior to last year’s new thing, and you won’t be as cool as the other kids on the river unless you write a big check. Our philosophy is, “nothing sells a $200 rod faster than a $600 rod that performs exactly the same.”

TD: Tell us about the shop feeling, vibe, esthetic you’re going after.

KK: I once read a magazine article written by one of those so-called “industry professionals” about the things flyshops do wrong. High on the list were eating, drinking alcohol, and having dogs in the shop. Other ghastly and unprofessional behaviors included loud music, inappropriate dress, and the use of profanity. In a list of 10 don’ts, we nailed 7.

TD: Last, what are some of the essential benefits of operating next-door to a specialty meats shop? 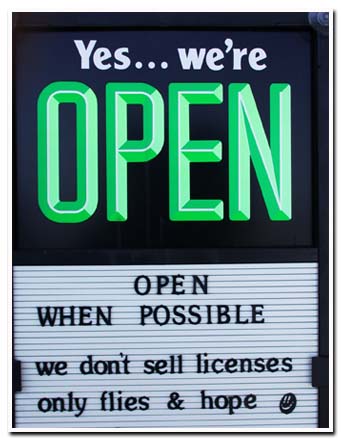