The River Why – a review 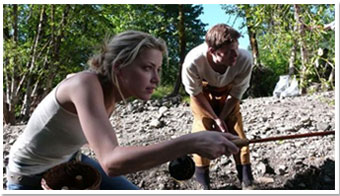 Dallas, Texas. There is one scene, early in the film adaptation of David James Duncan’s The River Why, where flyfishermen will undoubtedly connect with the movie. It comes the day Gus Orviston, played by Zach Gilford, ditches his parents and his life and moves into a run-down cabin along an Oregon coastal stream. After bringing in his minimal possessions, Gus wanders out onto his back porch, looks down at the beautiful river beneath him, and is filled with joy and excitement at the prospect of his “perfect schedule” (which includes “14 and a half hours of fishing” per day).

Beyond that, and some screen time for the nubile Amber Heard, there is little to take away from this film that is as good as the book. Flyfishermen will relate to the cabin scene because it represents something that we all have contemplated: Throw everything else away and just fish. But too much of the rest of the movie feels contrived and unauthentic, representing a blown opportunity to adapt one of the great Western novels of our time.

Indeed, one of the biggest challenges facing The River Why, the movie, is that The River Why, the book, might just be too damn good to be put to screen—by anyone, with any amount of money. The film tries to do justice to various plot points by including such memorable scenes as Gus hooking the dead body in the river, Gus stumbling upon Eddy (Amber) while she’s steelhead fishing, and Ma and Pa Orviston meeting for the first time, when they both hook Najinski the fish, nearly fight over it, then fall in love.

But the seemingly random placement of these scenes in the movie makes the storytelling as disjointed as Gus’ aimless internal dialog. The Najinski scene comes near the end of the film, rather then the beginning, as it does in the book. Though changing the chronological order of a storyline when moving from book to movie has long been a creative license held by producers and directors, it stands out in this instance because the last act of defiance by Gus before he takes off for the coast is to rip the stuffed and mounted Najinski off of the wall above Ma and Pa’s fireplace and throw it in the fire—a symbolic move largely lost on the audience because the true significance of that fish isn’t revealed until an hour later in the movie.
High points include some incredible cinematography of Oregon rivers like the Clackamas, Wilson, and North Umpqua. And Gilford, for all his inability to reel in a fish, at least looks fairly authentic in his flannel and earth tones, the directors wisely avoiding the temptation to dress him in bright colors to “make him pop.” And I enjoyed the night-time scene of him chasing the Chinook upstream, tethered by three-pound test. (It is no coincidence that this–one of the stronger scenes in the movie—includes virtually no dialog.) 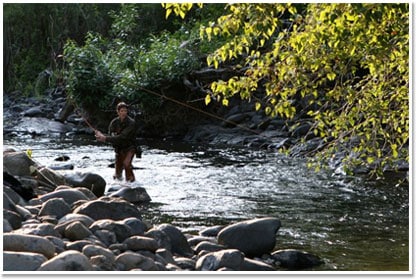 The flycasting in the film, incidentally, looks pretty good, due largely to stand-in Jason Borger. But sadly, it appears that all the authentic casting left little time to show how to properly fight a fish. (Unless lifting the rod to make a reel scream has some ancillary benefits that I’m unaware of, beyond providing good audio.)

As for the acting, Kathleen Quinlan is great as Ma, and William Hurt plays a believable snob as her husband. After that, the acting heads quickly downhill—though Gilford has one exchange with a dog named Descarte that he plays out brilliantly, resulting in one of the few humorous moments in what, at times, was a hilarious book.

I found myself wondering throughout the movie if I would be enjoying it more or less had I not read the book at least three or four times. About midway through, my girlfriend leaned over to me and whispered, “I’m not buying the chemistry between Gus and Amber.”

I wasn’t buying the chemistry either, but I’m referring to the chemistry between Gus and the river, which is really what this story is all about. I’m glad the movie was made, and perhaps it will find an audience among young frat-boy types looking for Amber Heard clips or the equally sexy footage of Oregon steelhead water. But if you’re looking to escape to that wonderful world of Gus and Bill Bob, of young love and soggy fishing in the Oregon rain forest, then I would still suggest that you read the book instead.