What Does the River (or a Fish) Owe You? 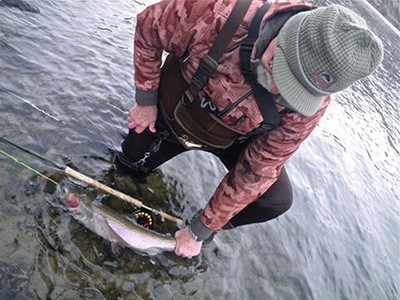 This year anglers are staring down the barrel of sacrifice. The worst run of summer steelhead headed up the Columbia River and its tributaries in generations is here.

The numbers paint a bleak portrait. Using the 5-year average, we typically see around 215,00 steelhead cross over Bonneville Dam, and of that number more than 100,000 are bound for the Snake River and its tributaries. This year only 95,000 hatchery and wild fish have entered the system. And less than 46,000 steelhead have crossed the last dam at Lower Granite on the Snake.

The story of Idaho’s steelhead stock is scarier. Just three years ago more than 40,000 wild fish graced the waters of the Clearwater, Salmon, and the state’s other salmonid streams. This year the pace is less than 10,000.

Now a major conflict has erupted between a coalition of six conservation organizations and Idaho Fish and Game (IDFG). As a result IDFG will shutter their season on December 7 in an effort to avoid a lawsuit. The backstory is long and deep. Fingers are pointing everywhere and anywhere. And all this begs the question: What does the river or the fish owe you?

Think about all the time you’ve given it. All the money you’ve willfully sacrificed to the obsession. All the flies you’ve tied. The reels spooled. Spoons constructed. The painstaking detail in which you’ve arranged your driftboat, sled, or raft. So much care given to so much.

Here’s the thing, though — none of the aforementioned qualifiers matter.

Guide or obsessed angler, layman or sport… there’s nothing you can bank on within the realm of fish or river. There’s no tipping scale of fortune that you can influence. Take a week off and drive 20 hours to steelhead Shangri-La only to find a blown out river. Tough shit. Add weather to the list of things you can’t control. Wake up at 4 a.m. and someone is already in your spot? Too bad, it’s a public resource.

Just because you bought a license somewhere doesn’t mean you’ve laid claim to limitless opportunity. If a season needs to close, it needs to close.

Step on a guide boat and think it means you deserve to catch a specific amount of fish because you paid for it? There’s a special place in hell for sports like that. Decide to make guiding your career? You better be ready to deal with the good and the bad. The epic returns and bottom of the barrel-scraping years. No matter what your choice to feed your family is, you must be ready to accept when a fishery needs protection. Keep fishing when you shouldn’t and you’re shooting your own kneecaps off.

And if you’re a guide who brags about a boat that catches dozens of salmon or steelhead a day, you’re part of the problem. Wouldn’t it be better to share the experience than emphasize a meat quest? They’ll never remember the special experience that is each fish. And there’s nothing special about your fifteenth steelhead in one day.

With salmon and steelhead, we’re facing another serious example of a tragedy of the commons. Here we have stakeholders on all sides screaming at each other, for big and petty problems alike. They’re not one state’s fish. They’re not one group’s resource. We don’t own them.

What we do owe them, however, is constant vigilance and stewardship. No user group above another. We owe them collaboration with a constant eye on the best available science. They deserve anglers to practice conservation anywhere they can, anglers capable of exercising restraint when it’s needed.

This sport has given us so much. The rivers and fish are woven into the fabric of our lives. But the minute these fish are gone—they’re gone. Atlantic salmon fishers on the East Coast can speak to that. Or ask the dedicated anglers of the Thompson River in B.C. what it’s like. A gutted feeling is the common theme.

We owe them everything.