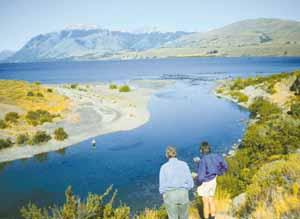 Portrait of a Passionate Trio
On a fishing trip, or a road journey of any kind, really, three people offers the perfect mix. One to drive, one to handle tunes and navigate, and one to sit in back and pass important items up front when necessary.

In a boat, the benefits are obvious: somebody rows, the other two fish, and the rotation commences. But even on foot, a trio better covers all bases, with one person fishing the riffle of arrival, one heading upstream, one down. If the recipe isn’t immediately obvious, then somebody throws streamers, somebody nymphs, somebody hits the surface. While the camaraderie of a fishing triumvirate might not hold the romantic qualities of individual solitude, or the father-and-son, grandpa-and-grandchild, “Grumpy-Old-Men” idyllic image of partnership, a triad remains the troupe of choice for anglers.

It was May of 1973. Richard Nixon was four months into his second term, the Oakland A’s were making their second of three consecutive World Series runs, and Paul Bruun had just accepted a job as editor of the Jackson Hole Guide.

Having moved from Florida, Bruun had a keen interest in boats, and he noticed a man out behind The Guide who seemed always to be messing about with a variety of rubber rafts.

“He wore an old Scottish cap and just looked like a real interesting character,” Bruun recalls. “I’d go in early, about six in the morning, and this guy was always out there tinkering around. I knew about bonefish skiffs but I didn’t know anything about Salmon River Rafts, sew-in bottoms, that sort of thing. So I start talking to him a little bit and I say to him `do you ever do any fishing?'”

The man stopped, leaned against one of the big rafts, and smiled.

“Do you like to fish?” he said. “We should get together sometime and go. My name’s John. John Simms.”