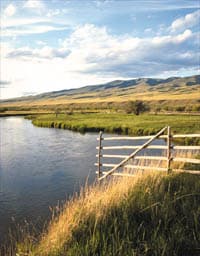 It only took a few minutes kneeling and staring into the ripples before I spotted a fish. A cutthroat, maybe 10 inches long, darted from behind a rock into the undercut bank. Walking this spread earlier in the afternoon, ranch broker Greg Fay told me that since he began restoring this creek along Montana’s Ruby River, the trout have slowly been returning. Fay also introduced me to the ranch manager and the son of the man who owned this creek and its adjoining 800 acres. The son asked that I not use his name. The new owner recently bought this creek and ranch just west of Sheridan, Mont., from Fay who acquired the property from a rancher who’d worked the land since the late 1960s. The former cattle ranch now closer resembles an overgrown parking lot. The creek’s banks are collapsed, the riparian corridor is thin and friable and the remaining shrubs and grasses are battered to nothingness. Still, the land hasn’t lost its openness, or its golden glow, or its ability to support life. It just needs some help, and Fay, owner of Fay Fly Fishing Properties, is the man for the job.

Fay has hydrologists, engineers, fishery biologists, horticulturists and a herd of other scientists working on the Ruby property. His crew has pulled up and stored what grasses were healthy and they filtered off some of the silt in the creek and removed old riprap-rocks or other materials placed on the banks for stabilization. Restoring the creek will make an excellent spawning run, as well as some good creek fishing. They also began building two ponds and a wetland area, creating habitat for waterfowl, elk and deer. Fay has undertaken quite a project here on the Ruby River, and he has four others just like it.

Ranches like this one are exchanging hands and getting makeovers all over the wide river valleys of western Montana. Land values are skyrocketing because land is no longer assessed for its agricultural use. Today, recreational and wildlife habitat potential determine the worth of property. Ranching families who have worked the land for generations and who now can’t afford to keep these ranches are selling to those who can-businessmen-who slap conservation easements on the property and then reap the tax benefits. Fay and others like him use conservation easements and watershed rehabilitation like bait to broker these properties. In the process, they are making an industry out of private property habitat restoration and protection. And, of course, they’re pulling in a few bucks for themselves.