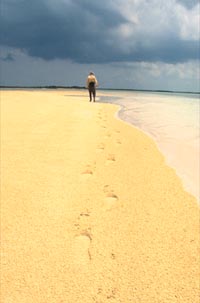 See them coming, swimming toward you like ducks across the sky at dawn. It’s hard for a Northern Rockies trout chaser to fathom: no hatch to match, no current seam to aim for, just you and a couple dozen bonefish headed your direction. Throw it too late and you’ll spook ’em. Too early and your fly sinks to the bottom. But time it right and suddenly there you are-light breeze, palm trees and a fish heading straight for Honduras.

Standing thigh-high in the waters of Belize will teach a dedicated western river angler more about our sport’s diversity than a thousand bonefish books could ever hope to accomplish. Because the tropics are so not Montana in November. Because a place like Turneffe Flats or Glovers Reef is everything steelhead fishing in springtime isn’t. You’re warm. You’re comfortable. You’re wearing shorts. And for once you can leave the “Nobility in Suffering School of Flyfishing” packed away at home with your leech patterns and neoprenes. It’s doubtful bonefish will ever replace brown trout on the unspoken scale of our piscatorial caste system. Still, a day on the flats leaves your head as clear as the surrounding sea and you never have to worry about hooking your backcast in the willows.

Here they come again, slightly smarter than last time. As the sun sets over your shoulder and the pull of another double haul turns your forearm to mush, you pick out a fish and aim…

–Tom Bie, the Drake’s Floatant, has recently changed seasons and will pimping as an editor at one of those Skiing magazines. Good job, Tom.