The most common forms of small-scale renewable energy are wind and solar, each with limitations. Solar doesn’t generate at night. Wind can generate 24 hours a day, but there’s no easy way to store the excess power it produces. A few resorts, including Pesca Maya, have installed wind turbines and solar panels anyway, using the energy as it is made, and storing what excess they can in the battery bank. Yet even a resort like Turneffe Flats, which is generally regarded as one of the greenest in the Caribbean, and has won numerous sustainability awards, has never been able to justify the cost of installing a wind or solar energy system, in part because of the increased number of batteries required.

Generators pose their own problems. They’re loud, and they are highly inefficient when powering air conditioning. “When you first turn on the AC,” says Velasco, “there is a brief moment when it demands five times more current. Because of that, diesel installations are designed with generators five or ten times bigger than the maximum load, just for the startup. If the generator isn’t big enough—like, if you have a small 5-kilowatt generator, and you want to start a 2-kilowatt AC unit, and there’s not enough power, then the system dies. The engineer doing the design doesn’t want to get a call that his system isn’t running, so he says, ‘OK, your maximum load is four kilowatts, but you’re going to need a 40 kilowatt generator.’ So I’m sitting here with a 40-kilowatt generator, and it’s December. It’s cool enough that we don’t need the AC, and we only have one room rented, so everyone goes to bed and shuts off the lights. I only need electricity for three refrigerators, which use 1.5 kilowatts of power, total. But I still have to run my 40-kilowatt generator that is burning six liters of diesel per hour.”

Improved battery technology, driven mostly by the electric car industry, is helping, but slowly. Lithium-based batteries (like ones in our cell phones) can last up to ten times longer than other batteries, but they’re expensive and difficult to dispose. “New technologies are coming,” says Velasco, “but lead-acid [car battery] is still the best choice for solar and wind, as long as you have room, and as long as weight isn’t a problem.”

But there is another kind of battery—an “ice battery”—that works something like the hybrid battery in a car, storing power so that it can be used later if necessary. Velasco, who has a background in engineering and renewable energy, built and installed an ice battery at Pesca Maya last winter. I visited him in April, to fish, and to check out his new system, which kept me cool and comfortable throughout the week. 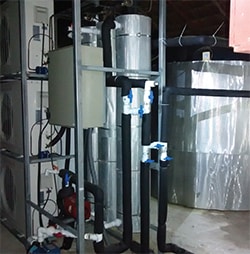 “This is our lab, and it’s constantly evolving,” Velasco says. “First, we bought chillers, which cools the anti-freezing liquid, like what you use in your car. Then we send it through a heat exchanger, which cools the temp down to 25 degrees so ice starts forming, then…”

He went on to explain the system, most of which went over my head. What I did understand was this: Velasco’s ice battery is a game changer, not just for his resort, but for other resorts, for the town of Punta Allen, and possibly for anyone living off the grid in a warm environment. The system cools water, then produces ice, then melts the ice.

The melting process captures thermal energy, or BTUs. A large insulted storage tank (see photo) is linked to the AC system via pipes. In the evening, when guests want a comfy night of uninterrupted permit dreams, cool air from the melted ice passes through the pipes. During the day, when you’re roasting out on the flats, the water is being frozen again by refrigerant being pumped back to the tank.

Ice batteries aren’t new, but their use has increased as technology has improved. In early November, Glendale, California-based Ice Energy, which has installed more than 1,200 of its “Ice Bear” systems around the country, was awarded a 25.6 megawatt contract from Southern California Edison, the largest electricity supplier in Southern California. Ice Energy’s system is installed primarily on large commercial properties, but the concept is similar to Velesco’s. And, like his, it isn’t intended to totally replace other power sources.

“We still have to use diesel,” Velasco says, “but we’re using it at maximum efficiency—getting all the energy out of every drop. Instead of running the generator for 16 to 20 hours, we’re running it for six. Then we put the extra energy in storage, and run the other 10 hours on the ice battery.”

Energy-storage challenges are shared on a larger scale by countries and governments. The U.S. has become the world’s leading producer of wind energy, with nearly 47,000 wind turbines operating—enough to provide power to 15 million homes. Renewable energy now accounts for 16.4 percent of “installed operating generating capacity” in the U.S. But what good is generating capacity without storage capacity? And why doesn’t the U.S. have more storage? For the same reason Craig Hayes doesn’t: Because it’s too expensive. The average retail cost to use a kilowatt-hour of energy is about 11 cents. The average cost to store a kilowatt-hour (if you happen to have a battery bank in your garage), is about $400.

The highest percentage of energy storage in America, by far, is hydro. Dams don’t store electricity, they generate it, by running water through turbines. What they “store” is energy, in the form of impounded water. Which is the same storage device Velasco uses—his just happens to be frozen. And near bonefishing.