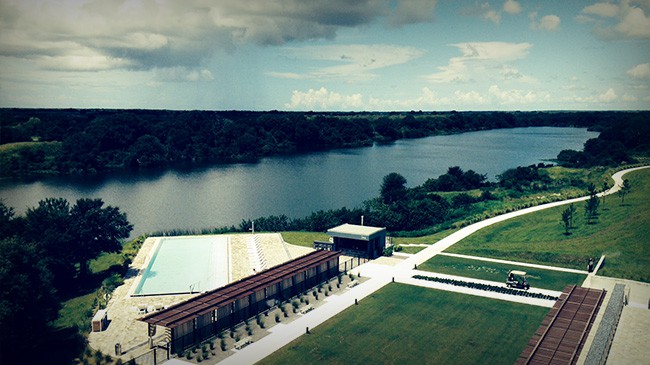 Central Florida largemouth on the links

You go to florida to fish the salt. But if you also happen to love largemouth, as I do, and you live in a place that’s a mile high, with a nine-week window to fish for them, then you take advantage of every opportunity to chase them elsewhere. Attending this summer’s annual flyfishing trade show in Orlando provided just such an opportunity.

There are a million places to fish for largemouth in Orlando. Or so it seems, based on what I saw from the plane window. But I was headed about an hour and a half southwest, near Fort Meade, to Streamsong Resort. Streamsong opened in 2013, and is typical of an increasingly common outlet for bass anglers—a golf course looking to broaden its revenue stream. The Wall Street Journal, Forbes, and The New York Times have all published recent stories on declining golf numbers, especially among kids. (According to WSJ, the number of golfers aged six to 17 has dropped 24 percent since 2005, from just under four million to just under three million.) There are now at least a dozen golf courses in Florida alone that allow bass fishing, though many of them are private.

I expected Streamsong to have a standard golf course layout, with manicured lawns running down to each water hazard, and flags to avoid on your backcast. What I found was something much different. Streamsong is owned by Mosaic, a Minnesota-based mining company that pulls 11 million tons of phosphate a year from the nearly 200,000 acres of land it owns in Central Florida, making it the world’s largest producer of finished phosphate products. Since 1975, Florida law has required that every acre of land mined for phosphate be reclaimed for other “productive uses,” and Mosaic has used much of that reclamation work to create 16 public parks in Central Florida.

The reclamation requirement also produced Streamsong, but it was mined back in the ’50s, so the bass ponds have experienced some 60 years of re-growth, making them look and feel and fish less like a golf course than a 100-year-old Deep South plantation pond. Streamsong’s mining bloodlines left behind a few deep holes scattered throughout the resort’s 11 lakes, all of which hold big bass. (Though not quite the “hefty 6-lb average” the resort’s website claims. But still, good fish.)

“We ain’t had anyone catch a bass on a fly yet,” said my Streamsong guide for the morning, Bill Read. “But you can try if you want.”

Read was friendly, outgoing, and courteous, with no qualms about throwing his nine-inch rubber lizard in front of my fly. I tried topwater at our first stop, but after Read pulled a couple largemouth from the depths, I switched to a sinktip and black bunny-leech to show him that it was humanly possible to catch a bass on a fly rod. We buzzed around in a 16-foot Mako the rest of the morning, each of us getting three or four fish. I didn’t golf, but a two-fer combo morning sounded nice.

The bass distraction was a welcome pre-game to the trade show. I’d go back again, but I wondered if there might be other courses closer to Orlando, like the well known Ritz-Carlton, where I’d fished three years earlier. Less than a week after the show, I had my answer. A fresh P. R. email arrived on July 22: “Everyone knows Arnold Palmer’s Bay Hill Club & Lodge is a highly regarded golf resort, but did you know this unique destination also has a marina located on the Butler Chain of Lakes in Orlando, which is considered to be some of the best bass fishing in the state of Florida?”