Keeping it Classy with Clyde 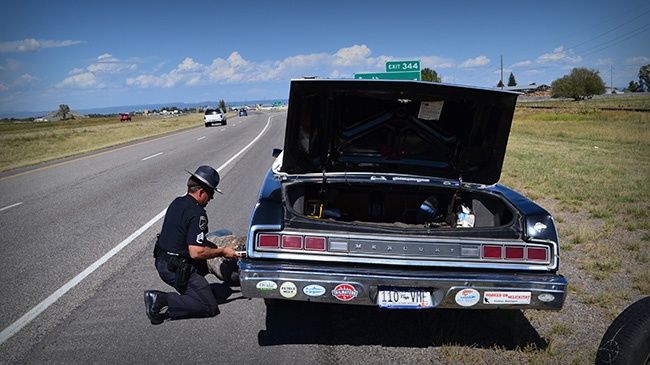 How to get skunked and befriend a cop

I wasn’t too concerned about the highway patrolman until I had to start digging under the seats for a piece of sharpened rebar. Then I thought I might go to jail. We were somewhere between Boise and Island Park, trying to get to Bozeman.

My girlfriend Catie and I had flown to Boise the day before to pick up Clyde. We went straight from the airport to the river.

The Snake outside of Boise is, primarily, bait-fishing water. Spin rods, lawn chairs, and mini-coolers lined the boat ramp when we arrived. Two desiccated catfish heads gaped at us from the gravel parking lot. Clyde fit in perfectly. It ain’t trout water, but there are plenty of carp, catfish, and smallmouth. Supposedly, they eat flies. But all my clousers managed to attract were weeds and a few bass the size of Twinkies.

After gorging on fajitas and margs, we spent the night in Boise. In the morning, we fueled up and grabbed a dozen Krispy Kremes. I was a little nervous; the engine sounded like a 55-gallon drum full of ball bearings tumbling down a hill, and an immense blue cloud appeared every time I started it.

But we made good time. On the highway, the road hum almost drowned out the engine. As we passed the halfway mark, I began to believe that we might get home.

Then there was a loud “WHOMP.” I could feel something bang the undercarriage and the car jogged hard to one side. 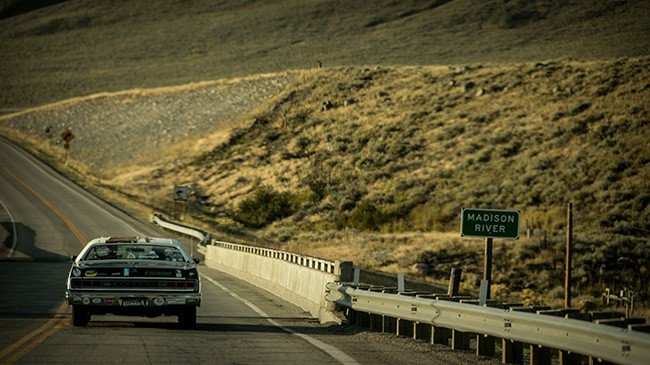 By the time we got to the shoulder, I could tell we weren’t riding on a rim; we still had four inflated tires. This was confirmed by a very perfunctory inspection.

“Did you hit something?”

It didn’t make sense. It was midday, and I was cold sober. How could I hit something and not notice? The car seemed to be weaving a bit more, but I couldn’t tell. It didn’t handle that well to start.

About a half hour later, the patrol car appeared behind us.

“Were you speeding?” Catie asked.

“Not at all.” I had been careful about that, knowing that a disintegrating ’74 Mercury Marquis covered in sunbleached stickers would draw attention from law enforcement.

He stayed behind us for a few minutes but didn’t pull us over.

She reached over and squeezed my knee. 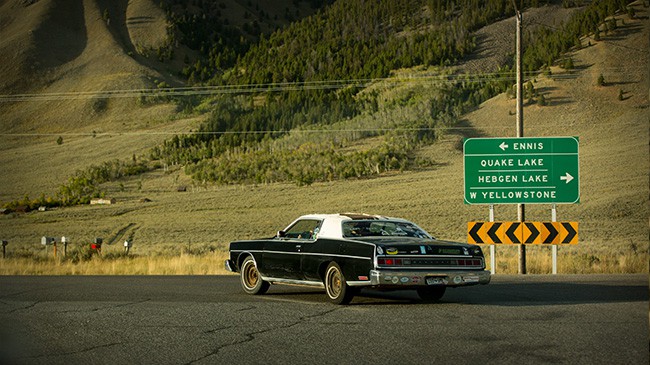 Cops make me nervous, a product of the run-ins I used to have with them in my youth when I usually was doing something wrong.

Predictably, the lights flashed and I moved to the shoulder. A patrolman appeared beside the window in his olive, wide-brimmed hat.

“Where you headed?,” he asked, eyes obscured under mirrored lenses.

“Today?” He sounded incredulous and looked the car and me over skeptically. It probably didn’t help that I was wearing a camouflage Waffle House t-shirt.

He examined my license.

“Are you aware that you have no tread on one of your rear tires?”

Simultaneously Catie and I realized what had happened earlier.

“You seemed to be having some difficulty keeping your vehicle straight. That’s why I started following you.”

This was true. Clyde is not the easiest boat to steer anyway, but riding on bare steel belts makes it worse.

He asked me to step out, showed me the tire, and began the interrogation. I realized how ridiculous I sounded.

“This isn’t actually my vehicle. See, I’m a writer; my editor owns this car. I’m just driving it from Boise to Bozeman, fishing, then writing a story about it.”

I gave him the background on Clyde. Though his expression never changed, I assume he was trying to determine how full of shit I was.

“Does this vehicle have a spare?”

“I think so. It’s probably in the trunk.” I pointed to the trunk. The entire lock mechanism was busted out.

“And what happened to the trunk?”

“I’m not sure; I had nothing to do with that. But I have a sharpened piece of rebar that will open it.”

“I’m going to need you to sit on the bumper sir, and keep your hands out of your pockets while I talk to Catie.”

I couldn’t hear much of their conversation, but after about ten minutes I heard the cop say, “Wow, you’re a good girlfriend.”

Apparently she corroborated my story because, when he returned, the tone had shifted.

“Depends on the day. So far on this trip I haven’t caught much of anything.” 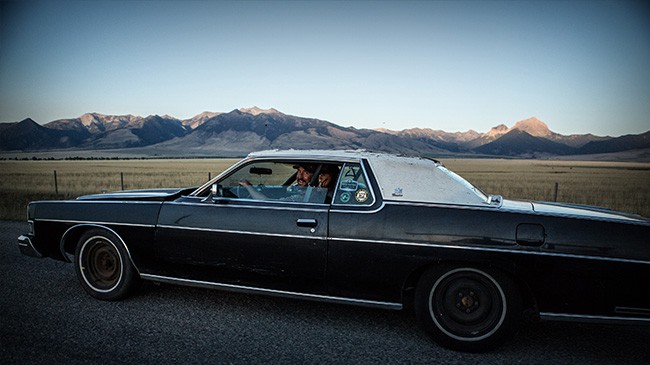 We talked fishing and he told me about his recent trip to Canada, all the halibut and salmon he caught. Fishing is a great way to build common ground, particularly with a patrolman who thinks you might be piloting a meth-mobile across state lines.

This brings us to the moment where I was digging under the seats of Clyde for a sharp object with a cop over my shoulder, praying that he wouldn’t see something incriminating. I could feel a large bottle (it was an aluminum water bottle, but I didn’t know that, and it felt like an empty liquor bottle) and scattered bottle caps (these turned out to be from Orange Crush not beer). I pulled out a mini-Kong (the dog toy) and a Mexican wrestler’s mask. The officer did not comment on these items.

Eventually, I found the shiv, popped the trunk, and removed the spare. The patrolman let me use his jack and worked the tire iron. He even invited us to go fishing.

“If you can’t catch anything in the river, I got a pond over there about a mile and a half, so long as you don’t mind my kids running jet-skis over your line.”

I thanked him, mashed the ignition, and pulled back on the highway. It was the most positive interaction I’ve had with law enforcement, despite the fact that I probably looked more sketchy than I ever have in my life.

We fished the Henry’s Fork at Island Park that afternoon. For the two people reading this who don’t already know, it is quintessential flyfishing water with big rainbows almost as snooty as the dry-fly anglers who pursue them. It is the opposite of the place we fished the day before, and Clyde looked mildly out of place listing beside such an aristocratic destination.

We got skunked there, too. In hindsight, we probably should have fished the cop’s pond.