Clyde gets his groove back, in Arkansas

Clyde is docked in the parking lot of Little Rock’s Ozark Angler, his big ass hanging beyond the lined allotment and his bigger-still nose hanging yards past the curb. He’s been baking in the 90-plus degrees for several hours.

I yank once and then again on his heavy door. The smell of ancient, super-heated, musty Motown funk blasts me in the face as the door opens with an arthritic “pop.” Ain’t it funny how two of the most distinct scents in the universe are new car and decrepit car? Both are instantly recognizable. For what should be obvious reasons, I also expect Clyde to smell of fish, at least a little. But he does not.

Clyde’s odometer reads 199,612 miles, and the oil-change sticker affixed to his windshield says the next one is due at 155,471. Duct tape holds a few things together and fails at others. I fire him up, massaging the accelerator a bit to coax just enough gasoline into the carb without flooding it. The kid minding the fly shop comes outside and stands slack-jawed. This could be the one and only time he’ll witness a carbureted big-block sputter to life. While Clyde catches his breath and settles into a contented chugging, I make a quick assessment. Everything essential to driving Clyde seems to work. The questions are: For how long, and will it fall apart on my watch?

Remember that Seinfeld episode where Jerry goes to buy a new car and Kramer tags along? Kramer ends up “test-driving” a car with a salesman and the test drive turns into a quest: How far beyond “E” can we go? How tight can we stretch finite limits before they break? How much can we flirt with doom before we catch his eye? This seems to be the essence of a Clyde trip.

But Clyde makes it from Little Rock to my home nearly 80 miles away with nary a problem. Actually, he makes the drive with remnants of the regal panache he enjoyed in decades past, when his pistons pumped with a youthful vigor. Once we’re out of town, I let Clyde stretch his legs. He rumbles smoothly, and we glide like butter down Interstate 40, catching eyes all the way. I’m pleasantly shocked to learn that the cruise control works. The AM radio works. The vent fan works, too, and the air coming out feels like a blow dryer set to “blister.” 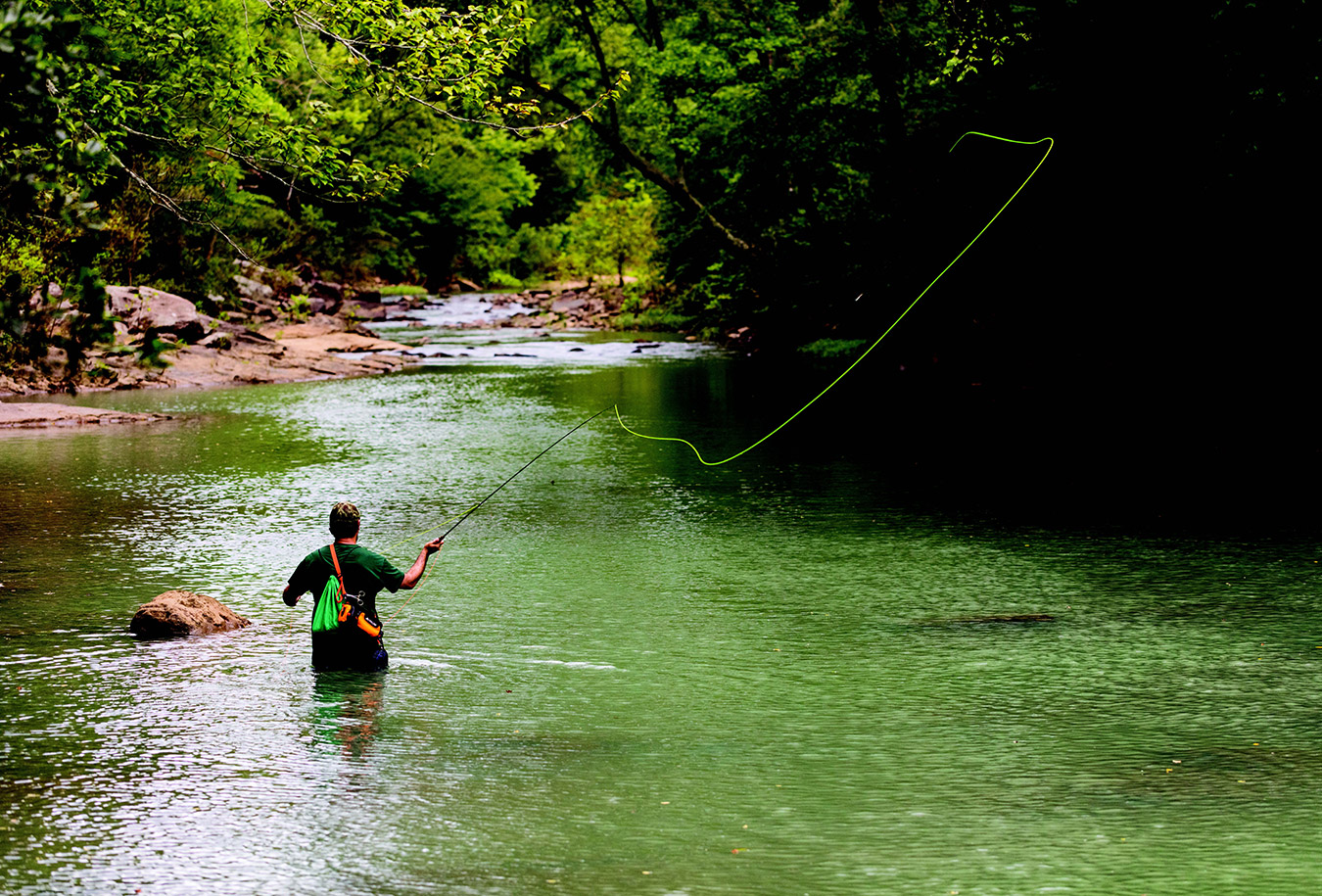 ARKANSAS IN JULY IS A VERY WET WADING-FRIENDLY STATE. PHOTO BY LIZ CHRISMAN

Once home, I call my buddy Keith and ask if he wants to join me on a low-key white-knuckle journey with Clyde through some rougher stretches of the Ozark Mountains in search of smallmouth bass. I rarely fish with anyone because I’m antisocial and don’t really like people. But I make exceptions for Keith because he’s brimming with that humble “aw shucks” likability, making a few hours on the creek with him not only tolerable but enjoyable.

We’re an odd couple as fly angling partners. Keith is a youthful and sophisticated junior high school-choir instructor who drinks designer coffees. I’m a middle-aged and grizzled writer edging into premature curmugeondom who drinks whatever is offered. Keith fishes in a stylish wide-brimmed hat and is outfitted in Orvis and Simms. I wear a camo ball cap and am outfitted by Walmart. Keith ties crawdad flies that, in the water, look more like a crawdad than crawdads do. I tie buggers with oversized hackles and convince myself they look like crawdads. But we both love smallmouth and the beautiful wild places they live.

The creeks we plan to visit are in areas of few people and no cell service. Also, no liquor stores. I live in and am surrounded mostly by “dry” counties where the sale of alcohol is forbidden thanks to some old-time religion that still has its talons sunk deep into the culture. Thankfully, that same culture is contradictory. It offers alternatives, and I’m able to procure a Mason jar of fresh-squeezed corn moonshine for the trip. 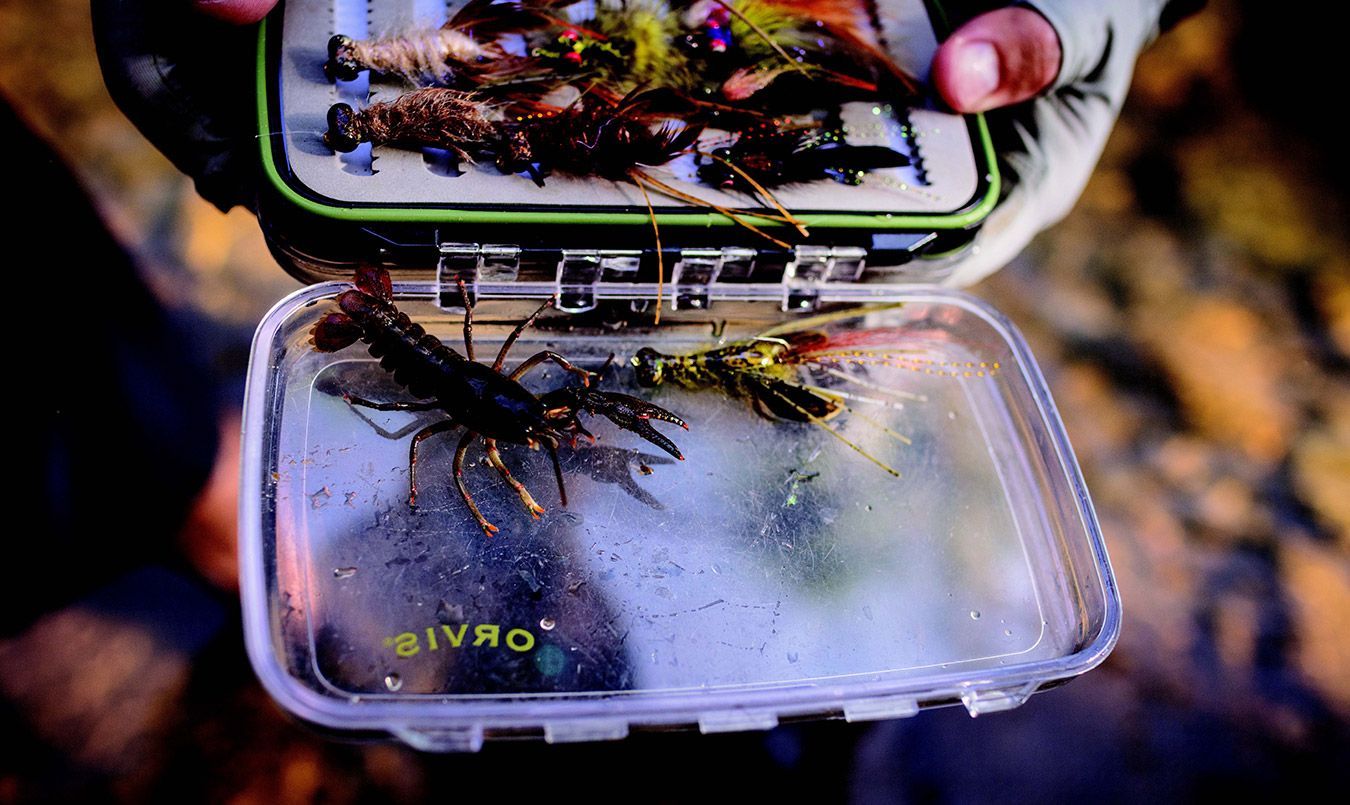 A few days later, I’m heading out before daybreak to meet Keith at the Ozark General Store. The fumes and nostalgia are thick inside Clyde this predawn. As he hums through the hills, I note that there’s something about the smell of burnt motor oil mixed with the subtropical air of a July morning in Arkansas that really gets my fishing juices flowing. It brings back memories of my dear Granny’s blue Ford Pinto. During my preteen years, she’d fire up the pony at daylight and take me to the lake for a morning of fishing. God, I miss her.

I also notice that Clyde has developed a whistle when I ease off the accelerator and wonder what that could mean for me down the road.

Keith is waiting in Oark with Liz, a professional photographer who went a little gaga over Instagram photos of Clyde and wanted to come along to document the trip. Who knew a 1974 Mercury Grand Marquis wielded so much sex appeal? I did not, but the number of people who ask about the car is staggering. Liz took a whole day off of work just to take photos of him.

The first stretch of water on the Mulberry River turns out to be a bust. We fish for a couple of hours and get only one small bass. After an energizing breakfast at the only place to eat within 50 miles, the day turns into a hunt for good water. Long drives on several dirt roads and gravel-bars (which Clyde handles spectacularly), along with some tiny, twisty access roads (which, thanks to his big nose, he does not) lead us to a stretch of the Little Mulberry that looks promising. And, more importantly, it smells fishy. 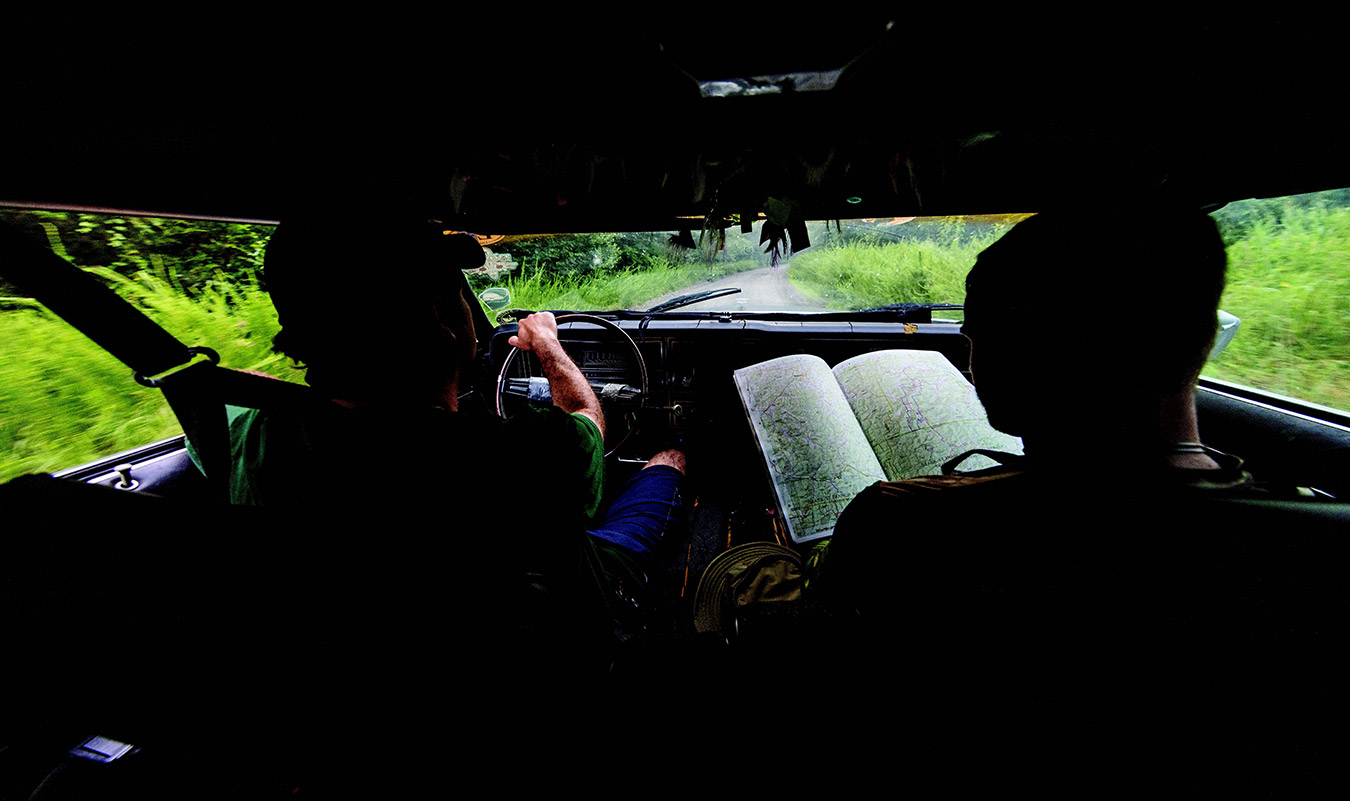 Keith goes to work and quickly pulls three brown bass from the first hole before I can get a hook in the water. Liz snaps some smallie shots. Then we inch our way upstream, finding Ozark bronze here and there in the draining riffles and in heads of pools as storm clouds and thunder roll ominously above us. Liz leaves us at 3 p.m., and Keith and I seem caught in perpetual twilight until the dark skies can no longer contain themselves. Rain falls as if poured from a bucket.

The surrounding topography makes flash-flooding a serious concern in these parts, so we precariously wade where we must before finding a well-worn deer trail that leads to a hay field, and then to a tractor two-track, and then to the dirt road, and then back to Clyde.

I wonder out loud if anyone has messed with him. 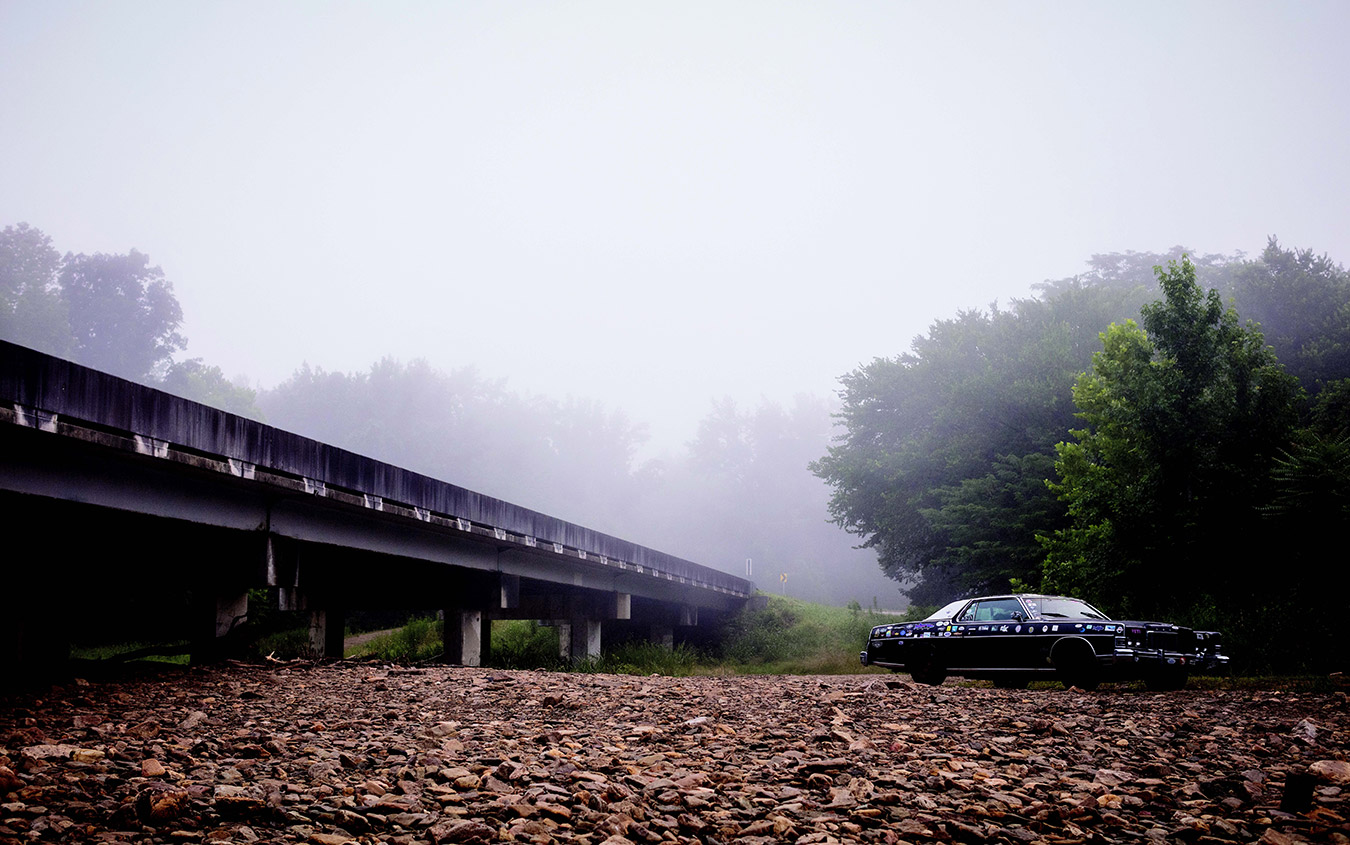 “Are you kidding?” Keith says, as we trudge to the car in sogginess. “He looks like something the Jeepers Creepers dude would drive.” Indeed, with his dark, low-slung appearance, outfitted with meaty all-season, gravel-chewing tires, Clyde looks a little like a hearse and vaguely Batmobilish in a rundown, redneck sort of way. Whether you’re a Midwest teenager, DC super-villain, or just a couple of fellers climbing out of the creek, Clyde is not the car you want to encounter on a lonely dirt road unless you have his keys in your pocket.

Soaked to the bone and pleasantly tired, Clyde’s lack of AC isn’t a big deal now. And on the drive back to the Oark Store we joyfully discover the wipers and the defrost work.

As we stow gear and change into dry clothes for the trip home, Keith says something about toasting the day with a bottle of rosé hard cider he’s brought along (made with French pink apples or some such shit), but I counter with the Mason jar and there’s no argument.

Outside of some worrisome vapors curling out of Clyde’s carburetor, and nearly driving off that narrow, curvy, steepsided access road, it was a fairly tame trip. But there were lots of side stories. For instance, while we were eating—here at the tag end of civilization in the state—Liz met a man who introduced himself as once being married to her mother. And come to find out, he was right.