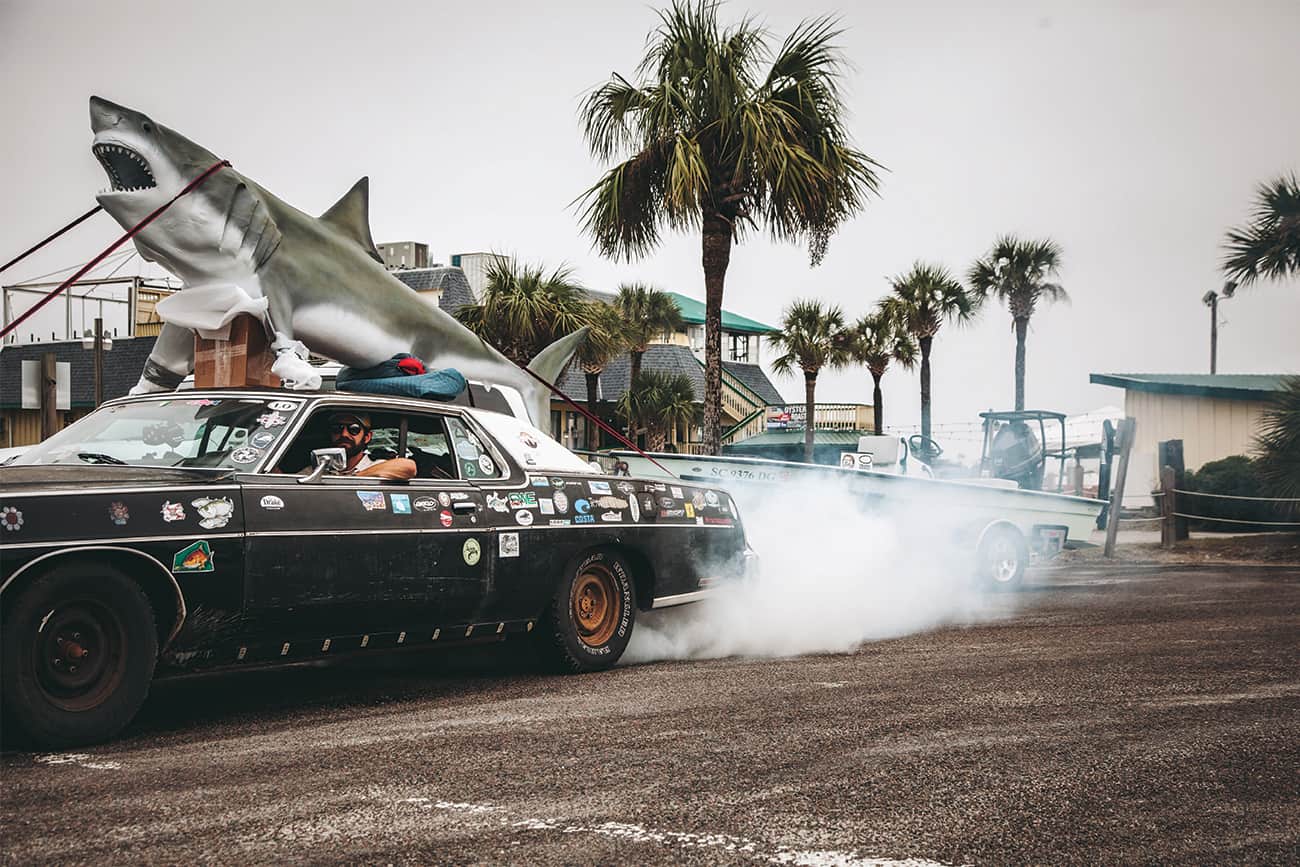 If you linger around a fly shop long enough on a slow day, you’ll eventually hear some crazy and creative fishing plans. My shop—Arbor Anglers in Golden, Colorado—is no exception, and on a recent afternoon in late October, the fishing plans got a little nuts. What started with: “We should find a big-ass shark-mount somewhere and hang it from the ceiling” soon evolved into us planning a Ride-with-Clyde road trip that included 10 states and a decent dose of redfish. 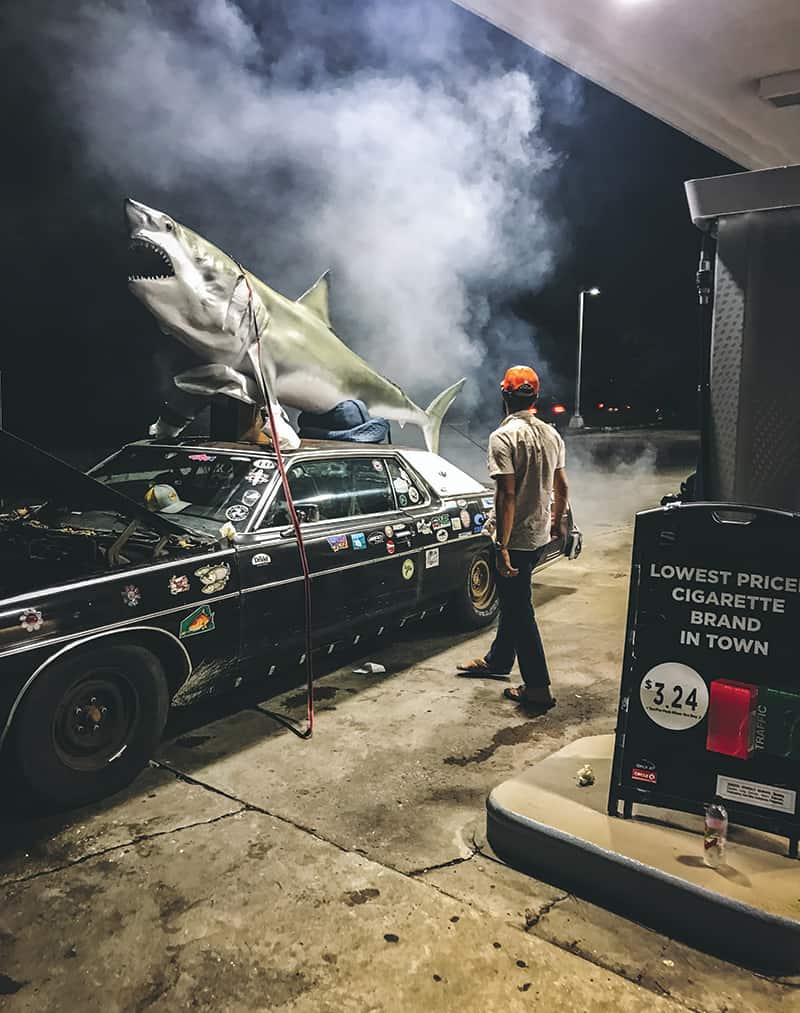 Which is how we found ourselves embarking on a 2,500-mile mid-November drive with a 12-foot great white strapped to the roof of a 1974 Marquis. Eight inches of snow covered the ground as we boarded our 2 a.m. flight out of Denver, and shortly after touching down in Lynchburg, VA, we found Clyde in all his glory. He looked questionable. He’d been ridden hard in recent years and could have used a tune-up and some replacement parts—like an engine, if that’s a replacement part. Regardless, we had a date with a great white, and as the keys changed hands we figured positive vibes and the right attitude would guide us back to the Rockies. We figured wrong.

Clyde was definitely up for the first challenge as we roared out of Virginia, and seven hours, four inches of rain, three jump-starts, two quarts of oil, and one spectacular laying-rubber burnout later, we pulled into Charleston. Shockingly, driving a ’74 Marquis around with a huge shark on the roof makes it difficult to fly under the radar. People who don’t know Clyde offer to buy you a drink, and people who do know Clyde offer to take you fishing. We turned down neither, doing our best to paint that whitewashed town as red as possible.

The night we arrived, we made it a point to bump into artist, musician, and Flood Tide front man Paul Puckett at a local BBQ joint. Beers were had, and in the morning Clyde signed autographs all over the parking lot of Flood Tide HQ. The next day, Puckett— proud participant and star dreamboat in one of the most iconic Clyde photo-shoots of all time—hooked us up with his buddy, Captain Jake Ellington of Osprey Fly Charters, who showed us the fishy side of Charleston. We spent the day chasing the falling tide and enjoying a new fishery, with several solid redfish landed by the Rocky Mountain contingent. To thank Jake for his Southern hospitality, we hitched his brand new Hell’s Bay to Clyde and burnt rubber all over Chucktown.

It was the perfect ending to our time in Charleston, and we were eager to get back on the road. We took a few laps around downtown just for fun, and the expressions of bystanders were priceless. We filled up the tank, added another quart of oil, and pointed that Marquis west. But we may have overestimated the power of positive vibes, because this time Clyde wasn’t ready to roll. When white smoke began pouring from the exhaust instead of the tires, we knew we had a problem. Luckily, we were right next to a mechanic with a working knowledge of cars from the ’70s. The diagnosis wasn’t conclusive, but Clyde’s immediate future was; he’d be getting trailered to N’awlins, where we’d spend another day chasing marsh reds. 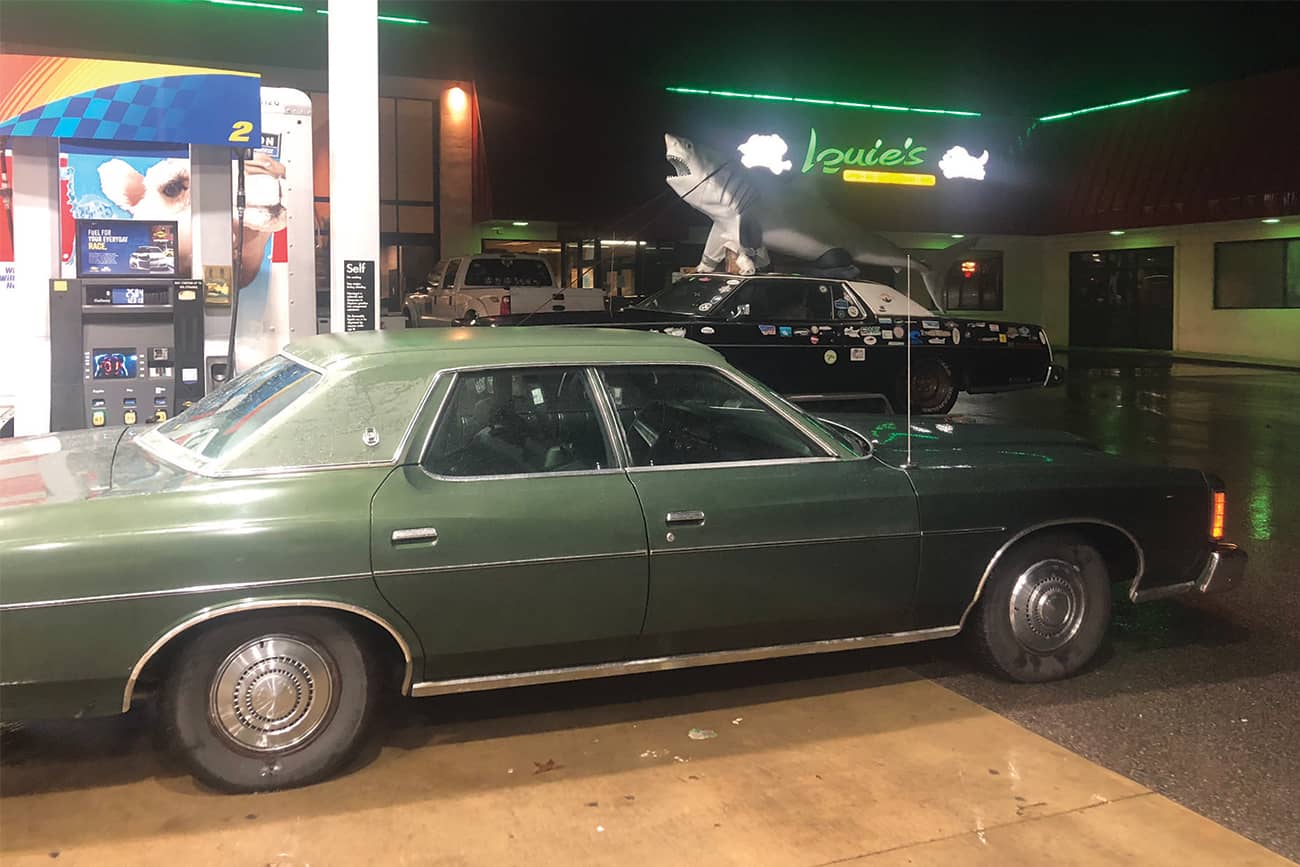 But when I jumped behind the wheel of that U-Haul in Charleston, with Clyde and the shark on the trailer, it just felt wrong; like I was cheating— like I was baitfishing. I searched for the nearest truck stop so I could shower and wash that feeling away. But then it hit me: if we can’t finish this boondoggle in Clyde, then maybe we can track down a “Bonnie” to pick up where he left off. We were soon scouring the old interwebs and, lo and behold, there she was hiding out in Georgia: a 1973 pickle green Ford LTD. The listing read, “Can be trusted to be driven ANYWHERE.” Since that’s just what we intended to do, it was too perfect to pass up. We made sure to give the seller a chance to pull away before saddling up “his baby” with the king of the sea. Then we peeled out, Louisiana-bound. 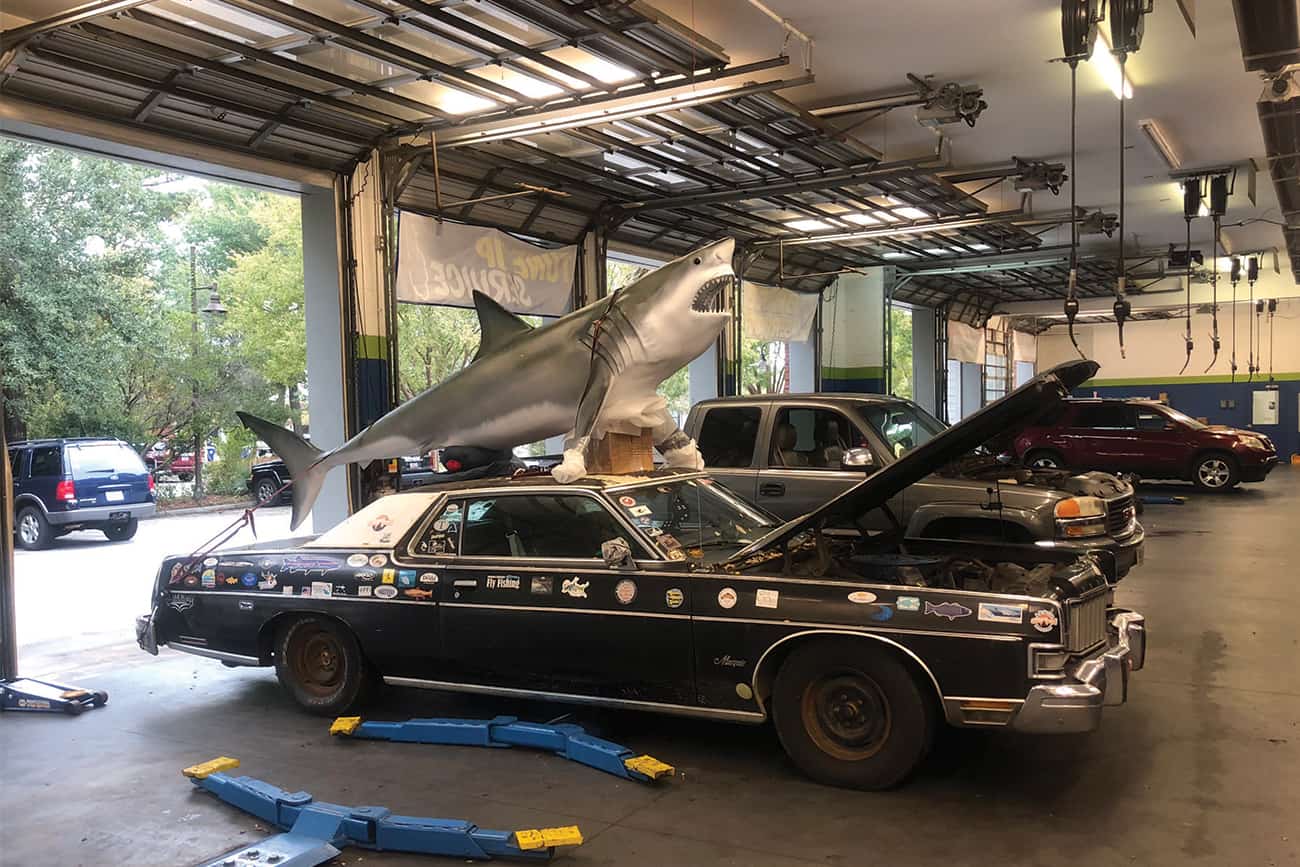 This little detour did, however, tack a few more hours onto our NOLA run. We were stuck with the U-Haul until we got to New Orleans, so our convoy wasn’t built for speed. When we pulled into The Big Easy the sun was just peeking over the horizon. We knew we had an important decision to make: Do the responsible thing, have a hitch welded to Bonnie, and get back on the road… or spend the day hunting for reds. You all know which one we chose.

One of the many lessons I learned on this trip is that you haven’t lived until you’ve taken a nap on the floor of a flats boat between turns on the bow. During the previous few days, we’d managed to accumulate more states than hours of sleep. Seven states in, we were running on fumes. But as any flyfisher will tell you, the moment that line goes tight, the sleepiness evaporates.

When our fishing day was over, and we stepped off the skiff and back into an old-ass car with a shark on the roof, we decided to head north, to Louisiana’s Bienville Parish. It was time Bonnie and Clyde met their reallife namesakes. 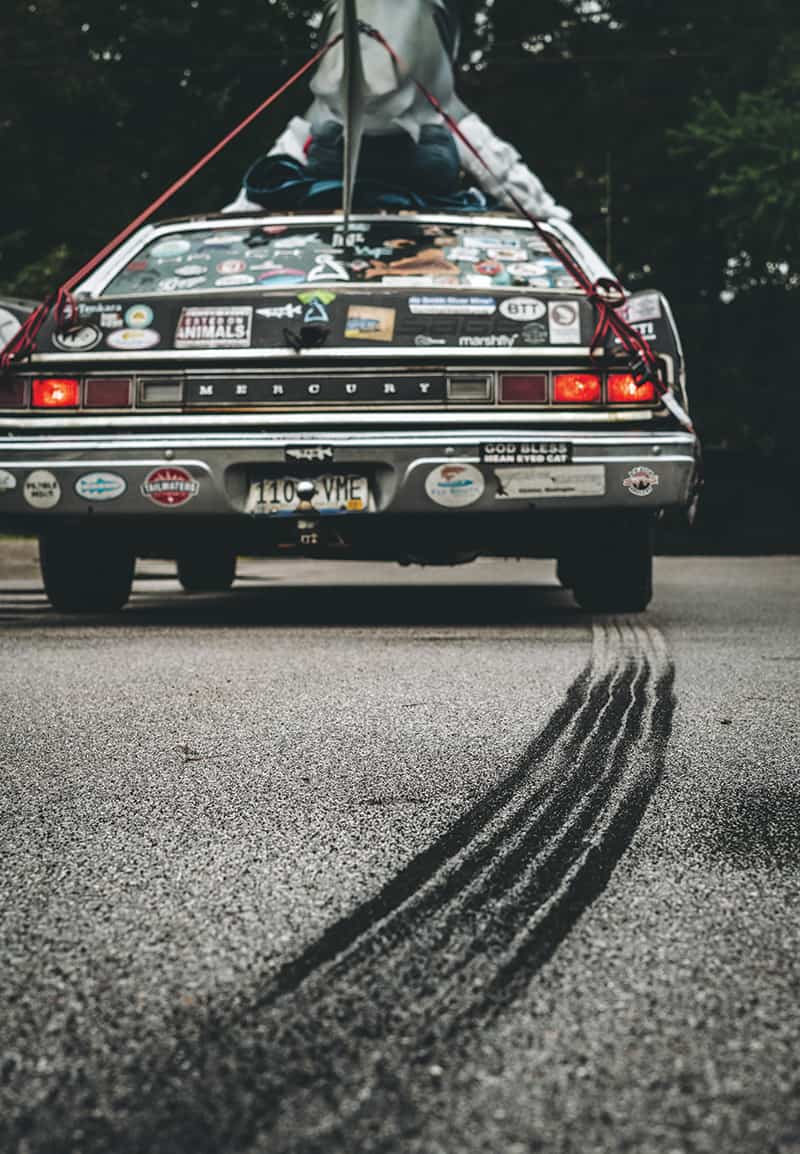