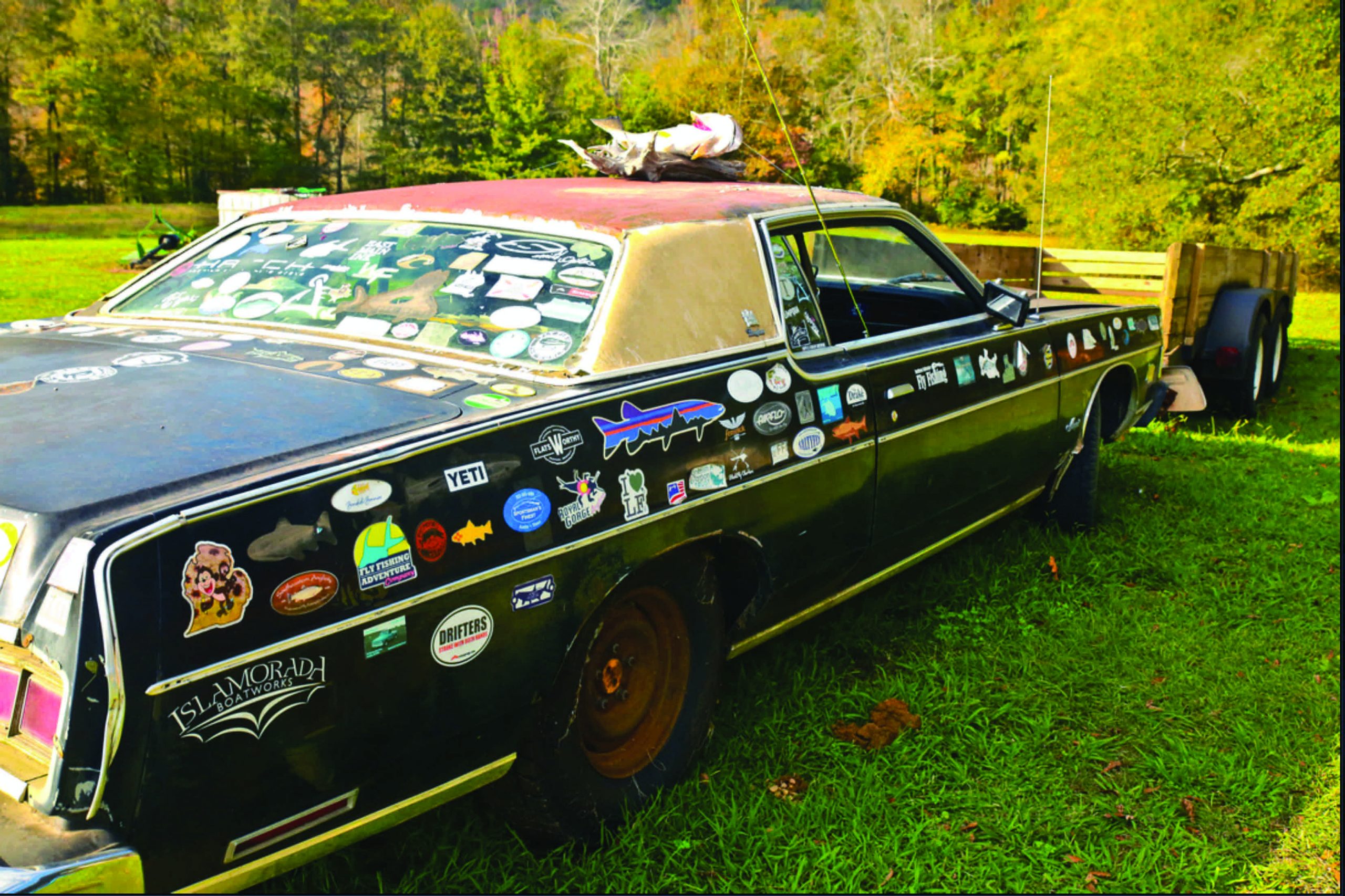 Searching for the Wrong-Eyed Bass in ’Bama
By John Agricola

When I got a call from Drake editor Tom Bie asking if I would participate in a “redeye bass familiarization trip” hosted by the Lake Martin Tourism Association, my initial reaction was wariness. Because I knew the truth: East Alabama Fly Fishing founder, Drew Morgan, had pulled another promotional trick from his sleeve by inviting a few media types, via a PR proxy, to come view his mastery of the Tallapoosa River. After all, he’s got the rowing and guiding dialed, so it wouldn’t be hard for him to connect any visiting writer to an Alabama bass, all the while masquerading as the oblivious, humble host of an event that he himself concocted. The rest of us guides would follow behind, naturally, fighting over whatever dregs Lord Drew left behind.

Tom listened politely while I shared these views, then informed me, “John, I meant you’d participate as the writer.”

Oh. This was welcome news. And also convenient, since—in my agitated state—I’d forgotten that I actually work for Drew, as a guide. Was I really about to go on a guided fishing trip and write about it—for money? I had, just weeks prior, chosen this exact ambition as my ultimate professional goal—now reached! My dreams—fulfilled!! My prayers—answered!!!

“There is one other thing,” Tom added. “You’ll need to go get Clyde. He’s in Tennessee.”

It was true. I had dumb-lucked myself into a collecting-Clyde mission. And I’d be retrieving 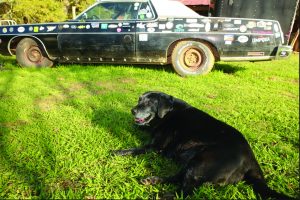 him from the lovely and talented Jen Ripple of Dun magazine fame. In truth, a trip to Nashville seemed a fair price to pay. More than sixty different writers and photographers had been stewards of Clyde since Tom and R.A. Beattie purchased him in 2011 for $1,600, in order to make the film, When Guiding Goes Gangster. Hence, if I held Clyde’s keys in my hand, then I could finally count myself a writer—one that had been given his first real assignment.

I was honored to be taking the 1974 Mercury off of Jen’s capable hands. I envisioned open roads and smooth sailing, with era-appropriate “Dancing Queen” on bluetooth. I was already building the storyline in my head: Highlight the conservation of habitat for a fish native to only a few remote southern states, and vital to the potential flyfishing culture in Alabama—a state with biodiversity rich enough to be called the American Amazon. My crew was hand-selected by me. Sort of.

If vanity is the Devil’s favorite sin, he loved me. All I could think about was the delightfully eccentric adventures I would have with Clyde—showing off how I had truly arrived as a writer. I began imagining gonzo-style journeys full of psychedelic adventures; strip-joint road trips to Foxy’s Lounge in Altoona; and apocalyptic film productions of Clyde as the heroic savior of Walking Dead, like scenes in the post-Covid future. Would he not be the perfect vehicle for a Mad Max: Fury Road story? I was dizzied by the potential for good ole southern yarn spinning.

Then it hit me: a revelation. In the early 2000s there was a documentary called Searching for the Wrong Eyed Jesus. The Jesus part made my crew uncomfortable—something about the sacrilege of boldly comparing fishing in any way to religion. But I was fine with it. Instead of putting a sculpture of Jesus in the trunk, we’d strap a taxidermied bass to Clyde’s oxidized roof. Here, fish become objects of deep consideration. The mount of a stagnant-lake-loving largemouth would be a foil to the worship-worthy, moving-water redeyes of the South (the endemic soul of Alabama flyfishing).

The story did not fully form in my mind until the last few minutes of the Kentucky-Florida football game. It was during that upset that Jen texted me a video of Clyde bleeding from his gas tank, as if stabbed by Joseph of Arimathea in his ribbed undercarriage. I was fetching him the next morning with a team of the fishiest folks I knew. Our plan, led by Drew and Matt Lewis, was to attempt a redeye slam (Warrior, Cahaba, Tallapoosa, and Coosa bass) in two days. I took a personal day off from my real job—the only one I’d accrued.

I couldn’t bear the thought of punting on the plan to get Clyde. So, my father and I left in his 2500 Dodge Ram. My faithful crew opted to go fishing that Sunday instead. Can’t blame ’em for that. Dad, on the other hand, has always supported my artistic inclinations. I cannot overstate my appreciation for his always-willing assistance in achieving my dreams, even if that meant driving four hours in a blustery storm, slightly inebriated, and unsure if our trailer—Clyde’s new wheelchair—would even make it to the Kentucky line.

Dad’s truck has almost as many peccadillos as Clyde. No radio, so I had to rely on a seventy-year-old to find music on an iPhone. I got him off Leon Redbone just long enough to introduce him to Mississippi Delta singer Cedric Burnside’s “We Made It.” This required me deploying a rather magnificent set of driving skills, since the truck had no defrost and we needed to wipe the night-time moisture from inside the windshield with our shirts, which we were wearing. All of this taking place on the archaic Alabama roads near Fort Payne. By the time we reached Smyrna, Tennessee, it was 2 a.m. I prayed a few times during the storms because I realized that we’d left without checking the trailer lights. We woke up at 6:30 and drove the remaining hour and a half to Jen’s home.

When we arrived, Jen and her friend Kurt were very kind in helping us crank the old Merc. Jen bought him a new battery, and Kurt sprayed ether in the carburetor until Clyde coughed flames, and then caught on fire. (I quickly put out the fire before he blew up. The leaking gas was still in play after all.)

After we got him started, Jen carefully drove Clyde up the guides on the back of the trailer, which promptly caused the hitch to pop off the ball, leaving the trailer pointing straight in the air. Luckily, reconnecting the trailer hitch to the truck provided crucial evidence in establishing that Clyde did not, in fact, fit on the trailer.

Undeterred, we just kept forcing him in until a bolt in the side wall of the trailer popped his front right tire, releasing a decade of stale air bought with quarters dug from seat cushions that Andy Dufresne would have refused to crawl through. Dad, Kurt, and I finally got Clyde strapped to the trailer. Jen couldn’t open the door, so she was forced to climb out the window.

Witnessing how hard Jen worked to rid herself of Clyde forced me to consider that he might be cursed. But my vanity had taken me this far—no turning back now. Driving away with Clyde on a stretcher, I was filled with hope and possibility and questions. Could we revive him?  Was a resurrection in the cards? Or was my journey for naught? 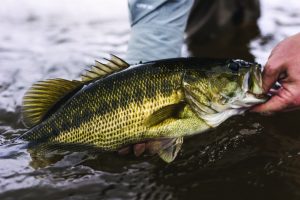 We bravely stayed the course to my father’s farm in Walnut Grove, Alabama. We’d done it. Thanks to the good folks at the Lake Martin Tourism Association, the East Alabama Fly Fishing Crew spent the following day floating the Tallapoosa River. The association even gave us a cabin at Wind Creek State Park so we didn’t have to sleep with each other on our raft in the rain.

As we floated along crushing Tallapoosa bass, heavy rain and lightning closed in, and there truly seemed no non-Biblical way out. So, yes, I prayed again: “Please let me get through this. I have an adventure to take with Clyde.” Lightning flashed and thunder crashed all around us, yet we mysteriously made it to the take-out unscathed. And there—behold!—the mystery of our safe passage was solved. Standing upright and unscathed, a gift beside our shuttled rig: a bottle of Clyde Mays Alabama Whiskey.