Booze consumed me as I sat listless in the upper bar of the Dogwood; a restored Mississippi riverboat docked a few hundred yards east of the Hopedale, Louisiana, boat launch. For the next two days and nights, the Dogwood would serve as home and headquarters to anglers competing in the 2017 Sheepy tournament—a tongue-in-cheek backcountry contest for New Orleans-area flyfishing guides.

A sheepshead, also known as a Cajun permit, can be just as difficult to catch as a regular permit, only with the added challenge of a full set of dentures that it can use to bite through your size four or six hook. Tournament promoter Miles Larose is an excellent guide with a deep knowledge of fish, fishing, and all things marsh-craft. He’s also an inveterate gambler, who views a $300 boat entry as a weekend of fun at Harrah’s Casino. In the South, gambling goes hand-in-hand with all kinds of sports, and the Sheepy was no exception.

I’ve always been fascinated by competitive fishing, especially the more esoteric flyfishing tourneys. Competition may seem to go against the more aesthetic nature of casting a fly, but when you devote your life to a sport that few ever watch you play, you can’t help but wonder how you might stack up against others.

Miles and I both graduated from the University of Alabama. While he was getting his business degree, I began squandering my family nest egg on saltwater fishing excursions, soon discovering that Miles had started guiding a few years earlier. I found one of his fishing videos online, and was impressed by both the videography and the fish. I wanted to catch reds with Miles, so I booked him for several trips. When I told him that I’d bought my own skiff—a 17-foot Spear Glades X—he invited me to compete in the Sheepy.

Famed tournament angler Harry Spear, who moved to the panhandle of Florida after he lost interest in winning tournaments in the Keys, built my boat. It’s beautiful but minimalist. After spending nearly all I had on the Glades X, I sold my 1991 Sprint to a Boat Mart in north Alabama for $300, which was fortuitous, since that paid my Sheepy entrance fee. 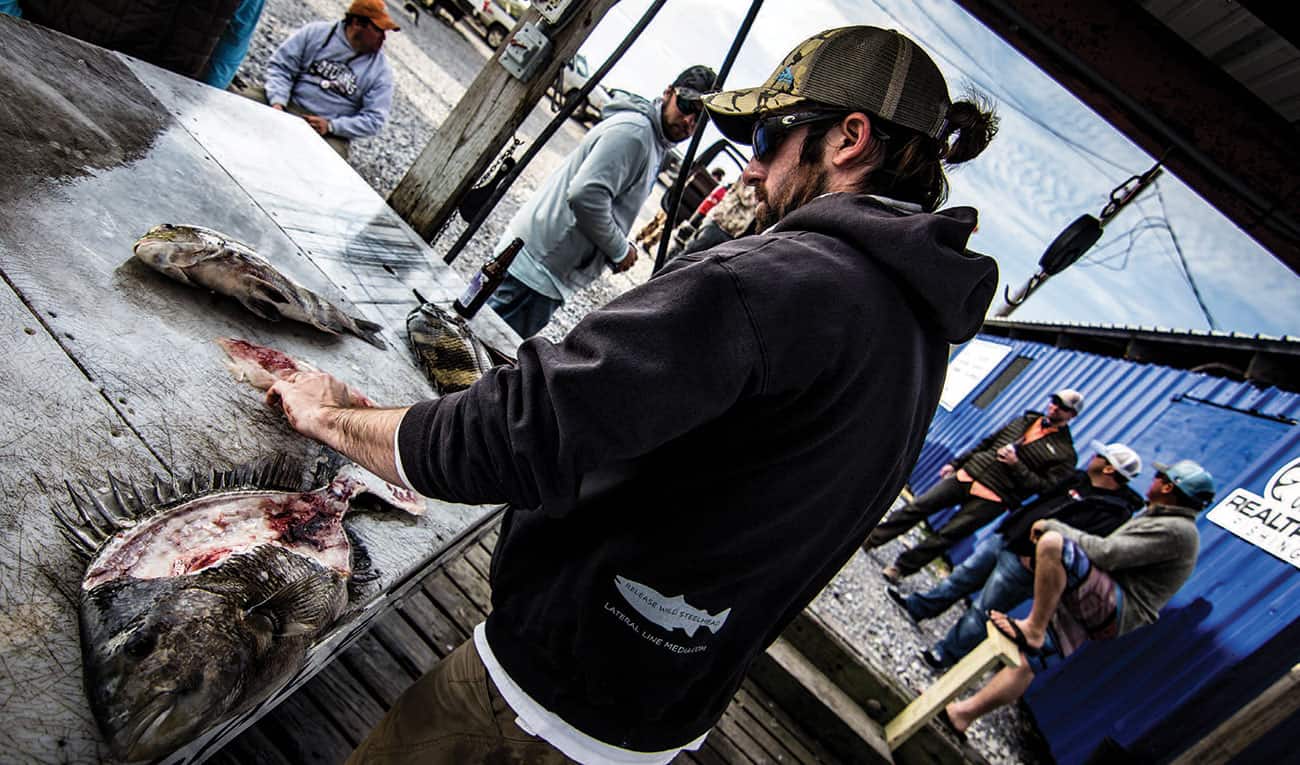 I needed another angler for the two-man tourney—ideally, someone that knew how to run a boat in shallow marshes, and who wouldn’t mind poling me around. Anyone could win this thing, as long as they were able to feed these spooky, toothy fish. I was confident in my ability as an angler, but was unsure of my navigational skills when it came to finding fish. I’d been studying Bing Maps for weeks, as Miles had charitably gifted me a fishing hole to find some sheepshead. I studied ways to get to the bay, and weighed whether I should be angler or guide. I’m from southern Appalachia, so most of my friends are bass fisherman. And even in the unlikely event that they flyfished, none of them would know anything about marsh fishing unless they’d caught reds with a guide somewhere.

I finally settled on Will Ingle, who sometimes goes by “Don Dingle.” Dingle had been recently laid off, which he viewed as not that big of a deal, since it was about to be turkey season. Dingle is from Mobile, and has a stump-knocker boat that he regularly runs through the 260,000-acre Tensaw Delta, Alabama’s largest wetland. He’s a spin fisherman incapable of casting a fly rod, but he’s also a six-foot-six, 275-pound former lineman from Missouri’s Lindenwood University, which I assumed would make him a strong poler.

Still, I needed something that would work as a reciprocal exchange to bait Dingle into entering the tourney with me. So I promised him a week of turkey hunting if he would help me compete in the Sheepy. Miles had told me that sometimes two fish can win the event, and that the winner takes sixty percent of the pot. As the event got closer, I saw that the wind was going to be gusting in the twenties. “Perhaps it will be possible to win without much skill,” I thought to myself, wishfully.

Dingle, mastermind that he is, mandated we chum, and even talked me into soaking my merkin crabs in Gulp, a shrimpy smelling cocktail made by the Berkley company. Unfortunately, we learned at the Captains’ meeting the next morning—held, of course, at Penny’s Café in Violet—that soaking flies with Gulp was against the rules. 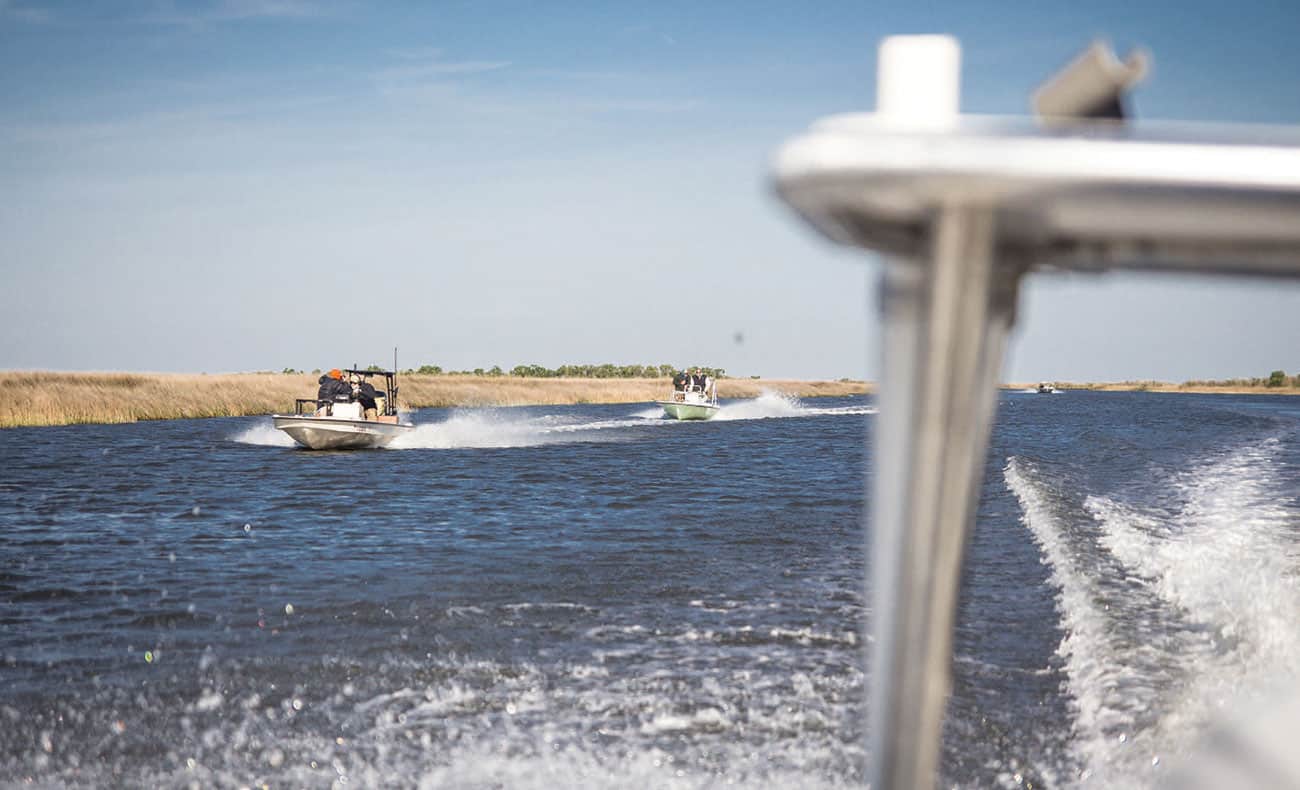 They say everything is bigger in Texas, but whoever coined that phrase hadn’t fished the Biloxi Marsh. Half the competitors in the Sheepy went down a canal toward some bays about fifteen miles south of the launch. The other half disappeared to the east, leaving Dingle and me on our own. The wind began to blow, making chop in the bays miserable for my skinny-water boat. We couldn’t find any sheepshead, but we did find lots of dirty water, so we fished small cuts for redfish instead. There were secondary prizes for the smallest red, and for a red with the most spots, so we just focused our energy there.

We wound up in the 42,000-acre Biloxi Wildlife Management Area, where we quickly decided that we should head back toward Hopedale, traveling west toward Shell Beach through a vast collection of bays. This turned into an hours-long boating exercise, motoring into a blistering chop of white-capped three-foot waves. Hence, we scarcely tasted the joy of competition. Dingle would occasionally stop to get our bearings on the Garmin, as we didn’t have a pre-charted course to follow. When we finally made it to Shell Beach, I was relieved just to escape the tourney alive.

Dingle and I weren’t the only ones that got skunked. Only three fish were caught, out of nine boats. As we were getting off the water, a guide named Rocky Thickstun walked up and asked me how we did.

“Not so good,” I said, “We couldn’t really find any clean water.”

“Yeah, that’s why I headed east,” Rocky said. “There’s an arm that protects the eastern water from the wind. But I wasn’t going to tell y’all that.”

In fairness, this may have been retribution for the poker game the night before the tourney, when I put Rocky out with my terrible understanding of card etiquette and flimsy grasp of the rules. He was likely still smarting from the forty-dollar hurt I put on him. 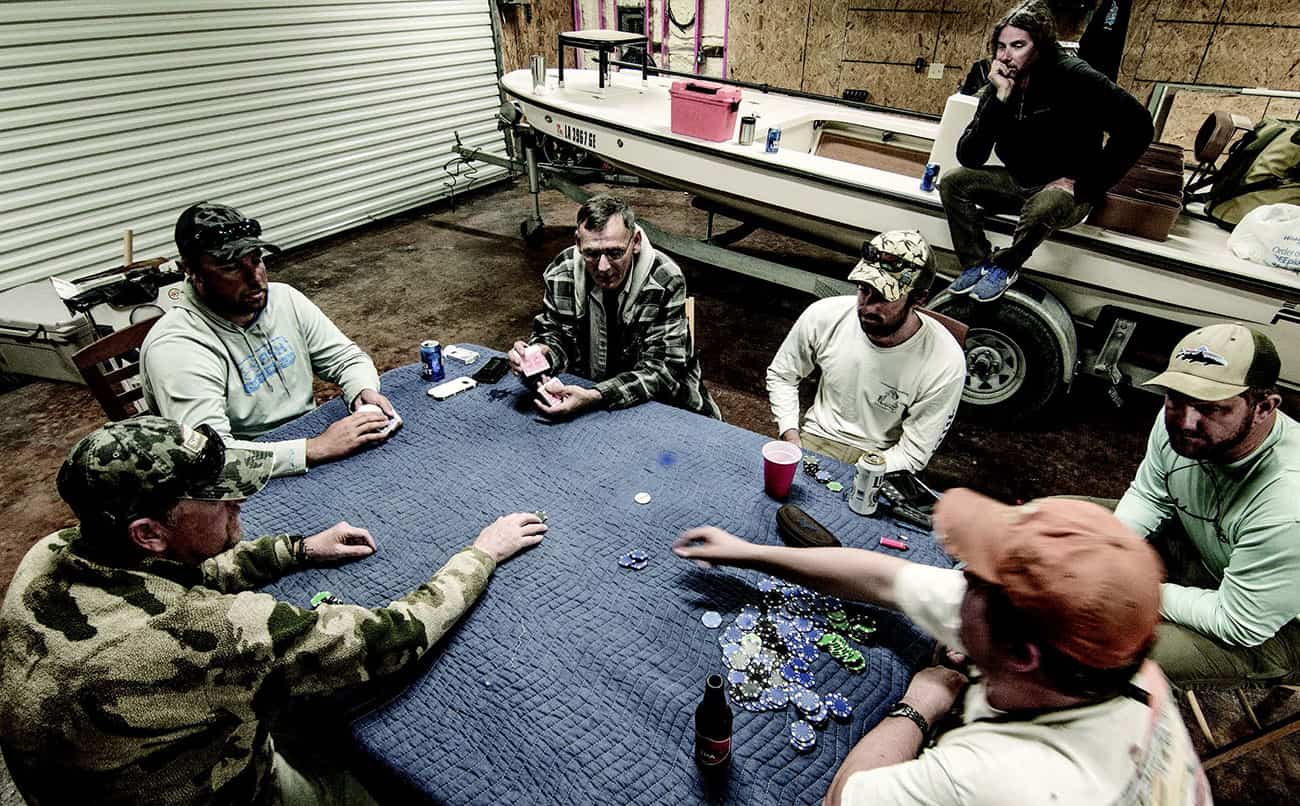 Back in the Dogwood lounge, I was fading fast, and couldn’t really socialize any longer. But that didn’t prevent me from making one more bad decision. This little Cajun named Ross had been flicking me shit in my stupor, and I’d had enough. I’d come to compete, and all I’d gotten in return after day one was some cold crawfish. So I challenged Ross to a casting duel on the lawn outside the Dogwood. It was two a.m., and the targets were a set of plates. I put up twenty dollars that I could hit each plate quicker than Ross. It took me about eight seconds to tag each target, which I thought was respectable. But Ross showed me that I still had room for improvement when he beat me by five seconds.

I paid the man his money. He hadn’t caught a sheepshead either, but he would the next morning. That little Bayou Rat caught the biggest sheepshead of the tournament on four hours of sleep. Or so I was told. Dingle and I paid the Dogwood owner for our accommodations, and then limped our way home, bypassing the second day. We stopped at Penny’s Café to eat, and I texted Miles that Team “No Hope” was leaving Hopedale.

My expensive boat ride taught me how much I had to learn. I’ll be back in Hopedale soon, so Miles can teach me how to find fish, and I can try to catch my first sheepshead. Dingle, I am certain, will head north for gobblers this spring.