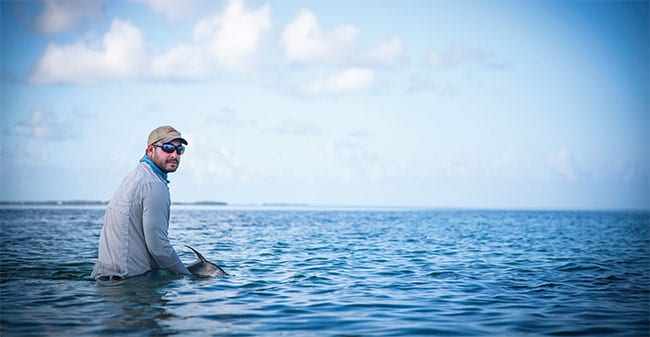 Ignore the tails, and keep on filming

IN MARCH OF 2016, C1 films released a permit movie called t. Falcatus Ch. 1: Day of Days. The film opens with Nathaniel Linville, owner of The Angling Company fly shop in Key West, giving viewers advice: “I recommend anyone who’s watching this, turn the volume down; I got nothing interesting to say.”

The film documents two anglers landing seven Florida Keys permit, in one day, on film. Linville lands six by himself, including a 30-pounder. Frankie Marion, the man behind C1, who spent the day behind the camera, claims they got lucky.

Rob Kessler, long time Key West flats guide, insists that there was more to it than luck. “Nathaniel is one of the best anglers in the Keys,” Kessler says. “He knows how to read the fish. [A seven fish day] can happen once or twice a year, maybe more if you are on the fish, weather, angler, fly, etc.”

Marion planned C1’s shooting schedule six months in advance. A hot and dry summer spiked water temps and led to some pre-production handwringing. Then, Hurricane Erica hit Florida the day before filming. Marion flew in from Charleston just ahead of the storm. “The first day it was raining and blowing sideways from 15 to 40 knots,” he says. “We got out there and couldn’t do anything.”

Erica might have blown them off the water, but she also cooled the flats. After the storm, the winds settled and the permit appeared. “It was silly to film,” says Marion. “We got set up in the evening and it exploded—hundreds of fish in super skinny water. There’s one shot where Nathaniel’s walking up on a fish and you can see three groups tailing. We’ve got that 30-pounder at the boat, and there’s six tailers in range. We popped the hook, made one cast, one strip, and came tight on another fish.

The last half of the film was all shot on one flat, with glassy conditions, perfect light, and waves of twitching tails—unlikely enough for an angler, but an absurd fantasy for a filmmaker. Marion is both of these things, but that day, the filmmaker won out. “I wasn’t about to pick up a rod and take away from what was happening,” he says. “I love to fish, but it’s cooler to be a part of the overall result than to make your own moment.”

Marion’s team-focus and self-control allowed him to create a movie that epitomizes one of the best aspects of flyfishing media: letting anglers virtually experience a fishing situation they’ll probably never see on their own. Too many fishing films leave audiences feeling that, with enough money, any of us could be the one in the movie holding the rod. In reality, even if we were in those places with those guides, few of us are skilled enough to live out our screen dreams. In that respect, t. Falcatus frames the day for what it was, a rare example of everything and everyone being perfect: the conditions, the fish, the boat handling, the fly choice, and the angler.

“When we’re trying to go make a film, everybody has their place of expertise, and we’re comfortable staying in our lane as a group,” Marion says. “Nathaniel works his ass off to be one of the best saltwater flyfishers in the world. When we go out, he doesn’t try to pick up a camera, and I don’t try to pick up a rod.”

The final element needed for a film to be a success goes beyond the conditions, the anglers, the filmmakers, or the editors. It needs to make money. Rather than selling DVDs (Who buys those anymore anyway?) or seeking corporate sponsorship, C1 decided to release t. Falcatus under a pay-what-you-want model. Anyone can watch the film on C1’s website as often as they like, contributing as much, or as little, money as they see fit.

“The pay-what-you-want model is something that Nathaniel and I talked about for awhile in the hopes that it would allow us to keep doing films where it was all about the pursuit, and it didn’t have to be supplemented with any logo or product shots,” Marion says. “So far it’s gone awesome. We don’t have enough data yet to make a call if it’s worth continuing. We have about five more films to release, and we want to see how those go.”