IT’S 3:00 A.M. IN THE EVERGLADES AND TIM BORSKI IS LOOKING FOR SNAKES. I’m riding along with him as we drive very slowly down State Road 9336—the only four-digit road in Florida. It is 34 miles from Florida City to Flamingo, a distance we are currently covering at about 15 miles per hour.

“Right up here is where I got the Diamondback earlier,” Borski says. When we get to the snake on the side of the road, he pulls over so we can get out and take a look. It has been hit by a car, but in the rather bizarre world of amateur herpetologists, the goal is to see a snake, dead or alive. Sort of like birders, only without the binoculars and funny hats.

I’m intrigued for a few minutes, but I’m not feeling relaxed here. The road leading into Everglades National Park is dark and isolated and scary. Every time we pull over, I get out on the non-road side and shuffle uncomfortably past a landscape that has gators and panthers and—we now know— Burmese Pythons up to twenty feet long.

This road, Tim tells me, is world famous with “herps,” especially those looking for snakes. Europeans will fly all the way to Miami, rent a car, and spend a week doing just what we’re doing, because few public roads on earth offer opportunities to see as many amphibians as this road does. So not only is there a chance that I’ll stumble across a snake in the darkness—something I wasn’t particularly excited about to begin with—but we are purposely targeting those areas were Borski knows we are most likely to find them. I ask him if he’s seen any of the pythons, which he calls “Burms.”

“I’ve seen as many as I care to see,” he tells me. “The biggest one was probably 15 feet and maybe 125 pounds. It was laying straight across the road and looked like a speed bump. But I have a way of dealing with them now. I park a tire on them, and I have a little bat in the back that I use to tap them on the head. It makes ’em go in the bag easier. Plus I don’t get bit.”

Borski grew up in Wisconsin and went to college at University of Wisconsin Steven’s Point. He was a student in the College of Natural Resources, which has long been a hotbed of conservation, in part because of Aldo Leopold, who grew up just 10 miles down the road from where Borski did.

“Of course, 24 miles down the road, in Plainfield, was another famous guy named Ed Gein, the inspiration for the Texas Chainsaw Massacre,” Borski says. “He was making lampshades out of people and sausage out of people—giving it to neighbors and telling them it was venizen. You can still get beat up in a bar there for walking in and asking how Ed’s doing.”

It was the Wisconsin winters that eventually got to him, sending Borski packing for Florida when he was just 23 years old. He’d never caught a bonefish and was pretty clueless about all things saltwater, but he was resourceful, eventually scoring a sweet caretaking gig on Craig Key in the middle Florida Keys, in a home owned by Dr Gene Coine.

“He was a bridge troll,” says Sandy Moret, owner of Florida Keys Outfitters in Islamorada. “He was visible from the moment he got to town. Anytime the current was moving, you’d see him down there.”

The caretaking job helped provide Borski more time to work on his painting and flytying, and it wasn’t long before he was being recognized for both.

“I started seeing him in shadow boxes,” says Moret. “He was a very innovative tyer— his bonefish slider is one of the really great shallow-water bonefish flies. The swimming shrimp is another one. And with his paintings, well, a lot of people draw fish. But the anatomical work he does is so accurate, and that was really refreshing to see.”

Two hours have gone by and I feel like we’ve driven about thirty feet. We’ve dropped Borski’s boat off at the Flamingo boat ramp and will be returning to it shortly to begin our tarpon– and snook-chasing mission in the backcountry. But first, snakes. I ask him how he knows where to look.

“Snakes stick to certain routes, just like fish,” he says. “Where we are right now is like the inside edge of a flat, or the tip of a flat that gets a lot of current.”

Part of me really wants to see a python. From inside the truck. A slight reduction in their numbers may have been the only positive thing that came out of Florida’s severe cold weather this past winter [2009-2010], what a May 18 story in the Washington Post called “one of the few welcome casualties” of the record cold. Pat Behnke, chief spokeswoman for the Florida Fish and Wildlife Conservation Commission, was quoted in that news story saying, “Our scientists believe that 50 percent of the population of Burmese pythons was decimated with the recent cold snap.” 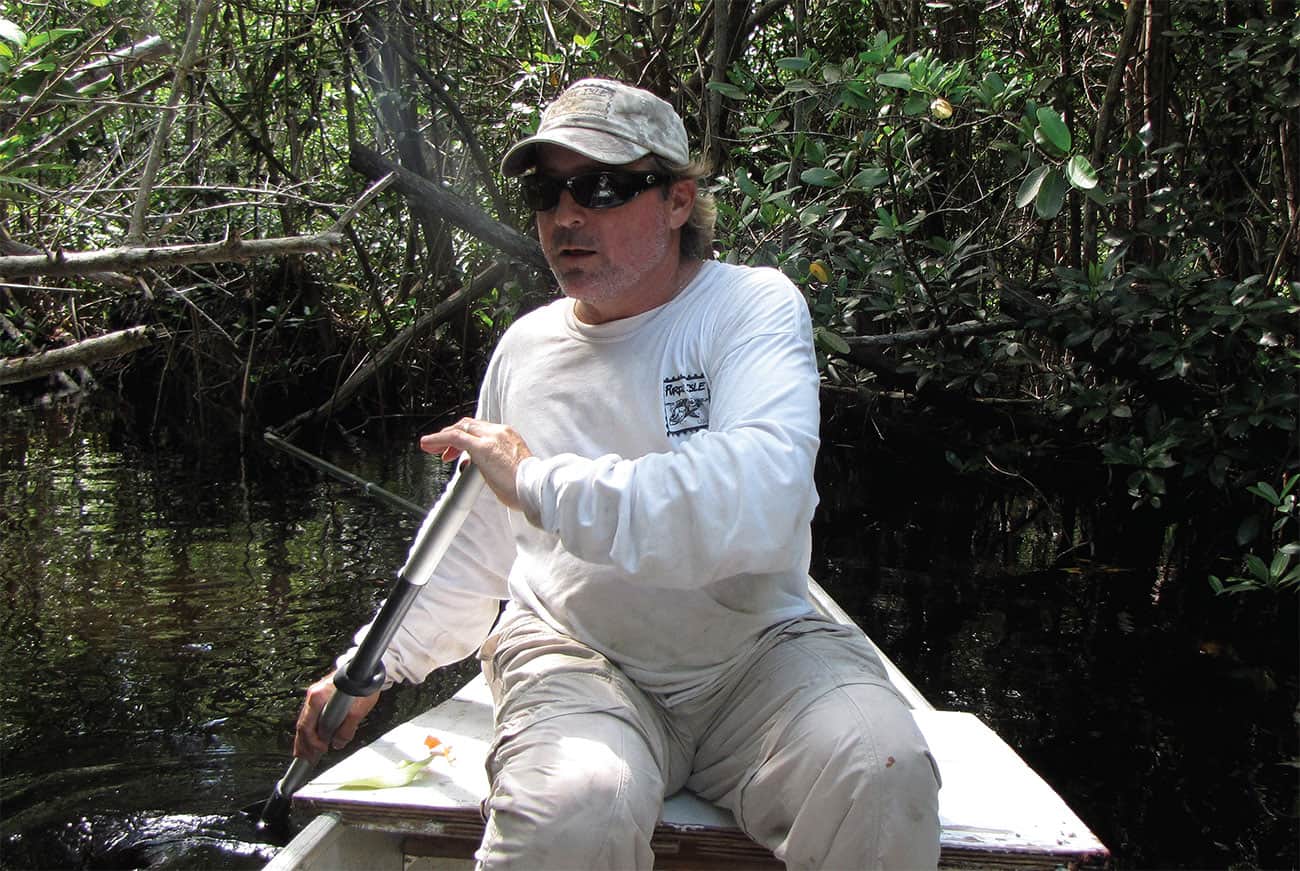 That would be welcome news about an animal that Borski calls “a bad critter.” There is no doubt as to the python’s knack for breeding. Borski was given a research permit by the National Park Service, and must report any python encounters back to NPS. His reports are part of a large databank that Everglades National Park has been compiling since 2000, and the numbers say it all: In 2000, NPS removed two Burmese Pythons from areas in and around the park. By 2005, that number had grown to 94. Last year, a total of 367 pythons were removed.

“I keep waiting for them to find a panther inside one of them, ” Borski says. “They’ve already found bobcats and deer.”

We end up seeing a couple more snakes, but no pythons. Regardless, I am impressed by Borski’s knowledge of all things critter-like. As we drove along, he would say things like, “That was a Cuban tree frog—an invasive species—but if you see one that only takes about three jumps to get across the road, then those are Southern Leopard Frogs. They are really fast.”

After a successful day chasing snook and tarpon in the non-motorized zone near Flamingo, I meet Borski at his house in Tavernier the following morning, for a little redfishing on the east side of Florida Bay.

“I’ve never guided,” Borski says. “But sometimes editors just hear what they want to hear. I’ll tell somebody I don’t guide and it’ll still end up in the magazine like, ‘Florida Keys Guide Tim Borski…’ Which is bothersome to me, because then I’ll get a phone call from somebody saying, ‘I want to book you for these dates.’ And I’ll tell them I don’t guide, and they’ll say, ‘Well, it says in this magazine article here that you guide.’ So then people think I just don’t want to guide them. And in reality, they’re right, I don’t.”

Nor does he tie flies commercially any longer, though he still gets requests.

“I got a call one time from Jimmy Buffet, asking me if I would tie him up a collection of particular flies,” Borski says. “So I told him, ‘Sure, I’ll tie some up for you. But I’m going to tie them on really shitty hooks that will break right away.’ Then he asks me why I would do that to him, and I said, ‘Because of Margaritaville.’ Buffet was like, ‘Oh, a little sick of that song down there are you?’ ” 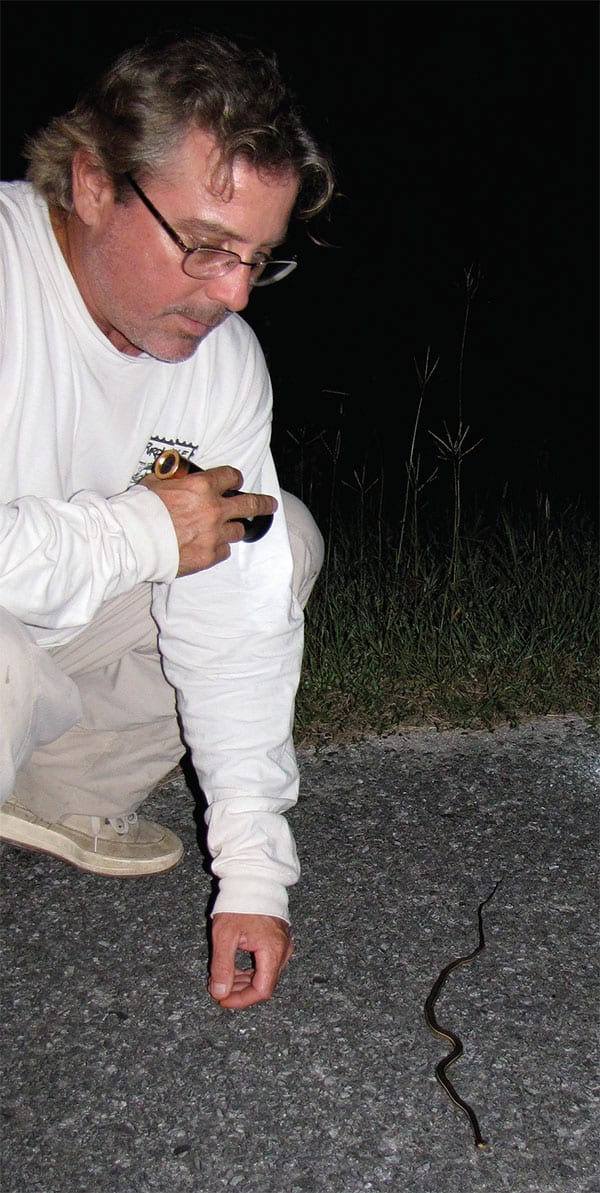 When it comes to tying, Borski is a big believer in natural materials, and says that everything comes back to the materials selection.

“When I tell someone to use rabbit, then I’m talking about a rabbit that I got in the middle of a Wisconsin winter,” Borski says. “But if you pull the hair off one that was run over down on Big Pine Key and sat out in the sun for three weeks, then no, you aren’t going to get the same results.”

Though Borski no longer concentrates on commercial fly-tying, his art keeps getting more and more popular, becoming commercial whether Borski wants it to or not.

“The more we’ve seen of Borski’s stuff, the more we’ve wanted to work with him,” says Don Swanson, president of Abel Reels. “I had a couple guys come up to me at the Somerset show in New Jersey and say, ‘I heard you’re working with Borski. Here’s my number— call me when it comes out.’”

As a generous prize-giver for numerous Florida fishing tournaments, Borski’s donated paintings have sometimes helped draw competitors, because, as tournament consultant Charlotte Ambrogio puts it, “Every fisherman wants to have a Borski on his wall.”

My 48 hours is running out, and with fall approaching, I ask Borski if he still hunts.