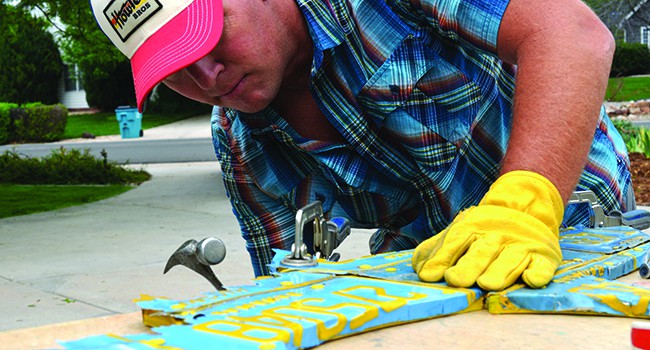 For artist Cody Richardson there’s no more enticing silhouette than the one belonging to a certain fish that he hasn’t yet caught. “To me it’s like the elk hunting of flyfishing,” he says of permit, as he pours us a couple of beers in his Windsor, Colorado workshop.

“They’re so smart and you have to work so hard to get them. When you do finally hook and land one, is there a more perfect fish?”

Sitting across the room, leaning against a jumble of wood-fabricating machinery, is the fish in question, an inanimate version crafted into a piece of wall art. This isn’t your typical oil on canvas, either. Instead, this is Richardson’s distinct rendition of Trachinotus falcatus, about 43 inches long from forked tail to squared noggin, and shaded in with the kind of rusty patina that comes from a single layer of 75-year-old license plates. Chipped and scratched, in yellows, blues and browns, they all read: Cuba. Each plate, depending on its condition, costs about a hundred bucks. This particular permit gobbles up 10 of them.

Procuring goods from the Cold War time-machine isn’t easy. Thankfully, Richardson knows a guy… who knows a guy. “My friend’s friend lives in Cuba and works for the DMV,” he says. “The DMV guy holds them for my buddy, who swoops down from Canada to pick them up. Then he sends them back to me.”

License plates are revealing. And perhaps nowhere has this been truer than in Castro’s Cuba, where authorities have had the power to pull Big Brother intel on drivers by simply running the numbers of their color-coded plates through the system. In a country where the government owns most of the cars on the street, blue plates mean you’re driving for the revolution. Maroon plates go to rental cars operated by vacationers. Black plates are for the whips of foreign diplomats (with speeding ticket immunity). Mint-green goes to the military. Caramel-colored to cars of business execs running government firms. And yellow plates grace the vehicles of the common folk, those $20 to $40 per month wage earners skippering Detroit-built boats down the palm-lined streets of Old Havana.

In Cuba, in a sense, you are what you drive. And your social status, your job, even your nationality hang, oftentimes precariously, on the questionable rear bumper.

The island nation in 2013, however, made some upgrades. It began phasing out the old, industrial-style plates and replacing them with the shorter, wider variations common to Europe. That means the classic plates, for collectors like Richardson, are in higher demand. And a personal trip to Cuba to track down new sources is coming soon, he says.

Similarly, most of Richardson’s flyfishing trips include an ulterior motive prompted by his art. “Fishing and license-plate hunting have taken me on some incredible adventures, from milling around scrap-yards in the Bahamas’s, to finding locals in off the beaten-path bars in Mexico. The experiences have shown me the true, grittier sides of some wonderful countries.”

Lately, Richardson’s Bahamas-plated bonefish—in salt-washed blues and yellows—have been top sellers for the 40-year-old retired fireman turned full-time artist. A handmade-to-order bone goes for $450. And for many collectors, it’s an easy price to justify, because no matter what the species, or the country or state it may have originated from, these pieces all play important roles. Similar to traditional fish mounts that have been around forever, they function as visual reminders of great days on the water.

The metal plates also help enhance those memories by adding a sense of place and history to each piece. And a detour down to Richardson’s basement reveals his cache of raw materials. There, stacked floor to ceiling, lives a recycling plant’s worth of antique steel and aluminum. His current inventory includes more than 5,000 plates stacked front-to-back in meticulously organized boxes. Many of the artifacts date as far back as the 1920s and ’30s. Colorado, Wyoming, and Montana are well represented. There are also a handful of colorful Florida plates from decades past—harder to come by, Richardson says, because one rival collector has devoted the past 15 years to scooping them all up for a museum collection.

Because Florida’s tarpon and permit tend to stretch beyond your average trout and bluegill, Richardson admits that he has his Sunshine State plate-gathering work cut out for him. But just like trying to catch a permit, he says, “The tougher the hunt, the bigger the reward.”