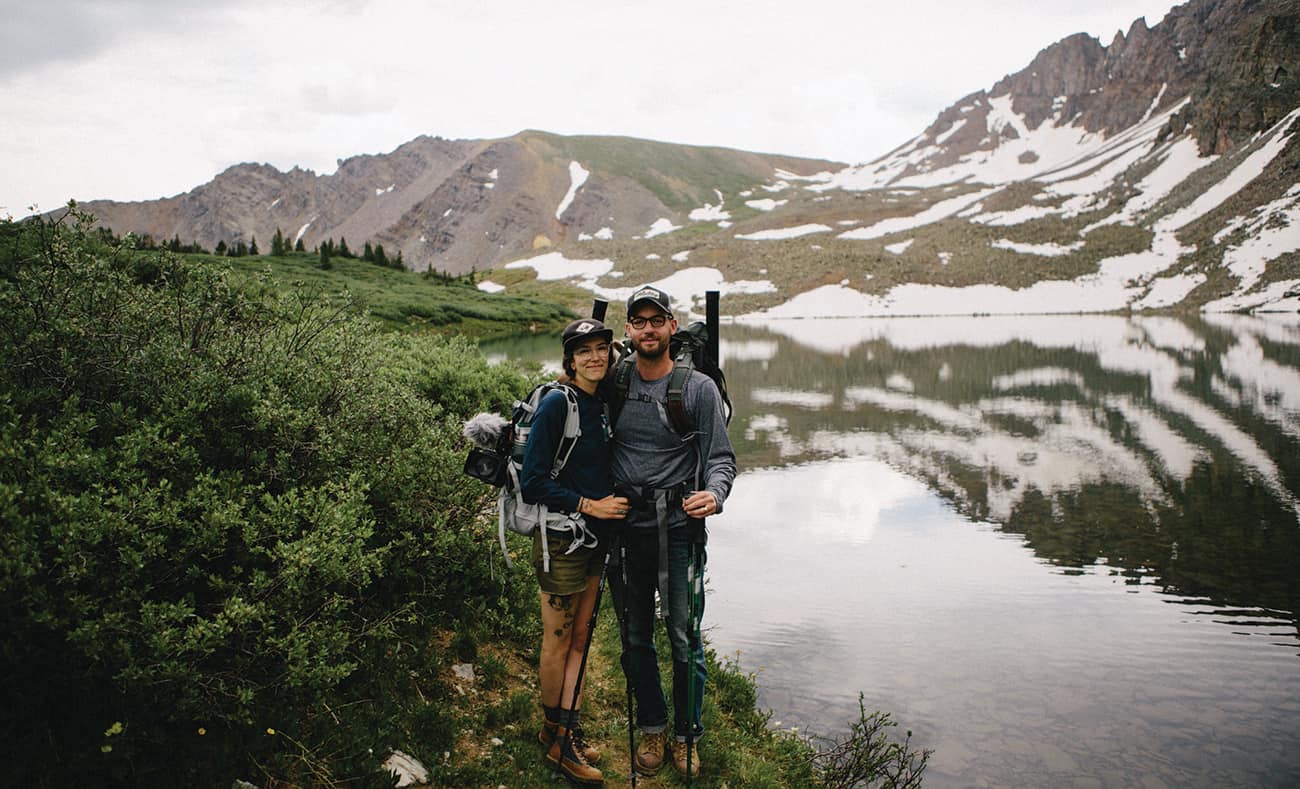 The art and film of Aimee and Chase Bartee

The film opens with a ten-second zoom toward campfire flames that dance and swirl in the darkness. The viewer’s eyes are drawn to the underbelly of the largest log, crosshatched and ashen from the heat. Jump-cut to a small stream, lit by autumn light, shorelines framed by a blaze of fallen leaves. An angler appears, twenty-five seconds in, and she’s casting a fly with precision, eyes fixed on her target. What follows is not the take, or hook-set, as a viewer might expect, but rather a shot of a large brown—not its gaping mouth, or downturned eye—but gill-plate, pectoral fin, and flank. Its belly is the color of butter browning in a skillet. The trout is supported underwater by the angler, while the lens pans its lateral line in slow-mo: scales glisten like spangles on a mirror ball. We realize we’re watching a fishing film, not a nature documentary, though it is shot and edited with similar reverence for the natural world, the filmmakers drawn to details of the elemental.

Fall in New England, A Love Letter is one of many short films by Aimee and Chase Bartee—filmmakers, photographers, painters, and printmakers—better known as Tight Loops Fly. Their more popular films include the “Journey On” series, which chronicles road-tripping for trout in hard-to-find places. Northern Exposure, about chasing big Maine brookies, is the most popular (82K+ YouTube views), and it won “Best of the Web” at The Drake Flyfishing Video Awards last year. In the age of GoPro QuickStories, Instagram hero-shots, and fish films condensed to bite-sized sizzle reels, Tight Loops Fly tests our patience with slower, intentional storytelling—stories in which the fish are second-fiddle to their environment. 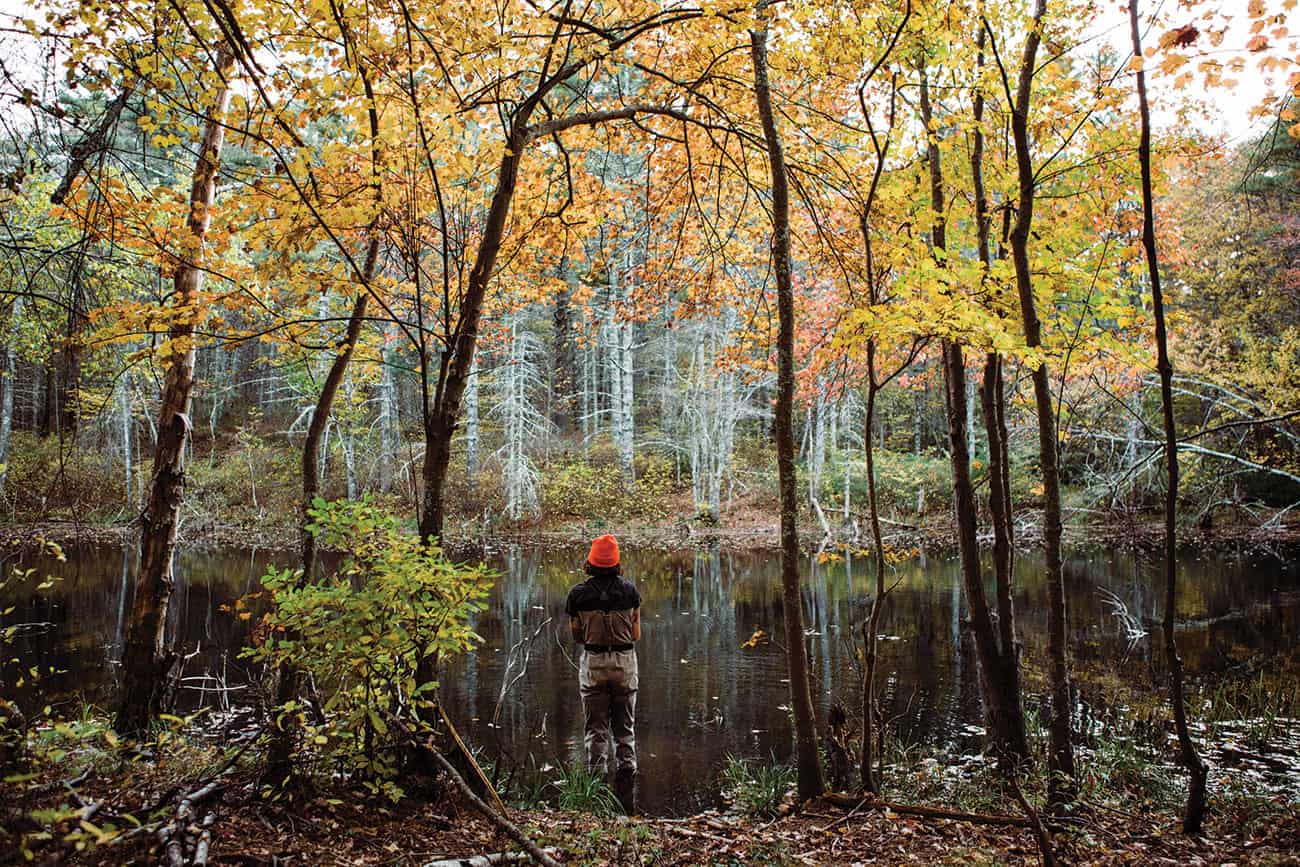 I recently sat down with Aimee and Chase in their North Attleborough, Massachusetts, apartment, to ask about their partnership in art and in life, and about the future of Tight Loops Fly.

Chase Bartee, 29, is of average height, sporting a few days’ scruff and a black knit hat, black-rimmed glasses, arms heavily tattooed. “Intensely introverted” is how he describes himself. Chase grew up in various places, including Montana, Israel, and West Virginia. His grandfather taught him to flyfish on the trout streams of southwestern Montana. “I loved doing anything that you had to figure out with your body, like casting a fly rod,” he said. He became interested in the fine motor movements of fly-tying, a prelude to his meticulous process in creating highly detailed fish drawings. During his teen years, Chase experimented with skate films, and fish films soon followed: “They have a similar structure,” he told me. He eventually earned a scholarship to RISD (Rhode Island School of Design), where he studied filmmaking.

Aimee Bartee turned 30 in August. She grew up in un-fishy North Attleborough, a few minutes’ drive from where she and Chase now live. She’s also of average height, but seems taller, given her slender, heron-like frame, with curly brown hair, glasses, and a nose-ring. In Northern Exposure, a hash-mark tattoo on her right wrist is visible as she releases another fat brook trout; as if she’s keeping tally. Growing up, Aimee occasionally fished for stripers and bluefish with her family out on the Cape. “Sometimes we’d get up at 4 a.m. and load into the boat,” she remembers, though she didn’t touch a fly rod until much later.

Aimee attended Mass Art to study photography, but dropped out after one year. “It just felt like a continuation of high school,” she said. She relocated to Atlanta and joined a punk band (bass and lead vocals). “More screaming than singing,” she said. She worked odd jobs to survive, toured with her band, but eventually grew tired of the scene. Her photography waxed and waned, but never left her entirely. After a bad breakup, she came back north, and ran into Chase at a bar in Providence. He sent her a message online after their run-in, and soon they were seeing each other regularly.

“Flyfishing was something I didn’t really understand until I met Chase,” Aimee admitted. It didn’t take her long to get the knack of it: two hours into her first lesson, she was throwing forty-foot loops. “I loved it. It was really unexpected: here was this new excuse to always be on the water, to be connected to the things around you, to see fish up close. It was a totally different world than the one I’d been living in.”

She started shooting their fishing adventures; Chase started filming her on the water. It was Aimee casting the fly in the opening of Fall in New England, and she is often an on-screen subject in Tight Loops films. Though she’s only been flyfishing for four years now, her casting is fluid and economical.

“I think we have some kind of internal sense of recognizing people who are genuine, and natural, and Aimee’s just good at fishing,” Chase said. “I shine the light on her because I think she’s interesting. We’re not making a fishing show, so she doesn’t have anything to live up to.”

Aimee is as comfortable behind the lens as she is in front of it, shooting both video and stills with a documentarian’s curiosity. Her photos focus on the rustic and naturally sublime: a commercial fishing boat iced in at its dock; a cluster of prickly pear cactus back-dropped by red cliffs at Arches National Park. She’s sought after to shoot weddings, too, though she doesn’t see herself doing that forever. Like Chase, Aimee is happiest outdoors, preferably in wilderness.

After dating for a few years, the two embarked on their first road trip together, in Aimee’s brown 1985 VW Westfalia van, affectionately named Bullwinkle. While in Montana, Chase planned a backcountry camping/fishing trip in the Absoraka- Beartooth Wilderness, to a high-altitude lake supposedly filled with golden trout. The pair hiked seven miles, with a vertical gain over four-thousand feet, carrying camp gear and fly rods on their backs. Aimee had been terrified of grizzlies for the entirety of their three-month western adventure, so Chase downplayed the risk, knowing full well the area had high bear activity. “We were both walking along shouting, “Hey Bear!” he recalls. “And that hike was a bitch.” Once they arrived at the lake, the goldens rewarded their effort; they caught as many trout as they wanted. The following morning the lake was still, the sky bluebird. Snowshoe hares investigated their campsite, but thankfully there were no bear sightings. Aimee and Chase sat together as the sun rose, sipping coffee and watching shadows traverse the cirque across the lake. Chase snuck back to camp for a moment to retrieve the ring he’d smuggled along. “I’ve never been so nervous in my life,” he recalled. It was there, in the high backcountry of Montana, beside a lake so remote and cherished they prefer not to share its name, that Chase proposed. There were lots of tears; Aimee said yes. A few minutes later, the two rigged up and went fishing again. They married in September, 2016. 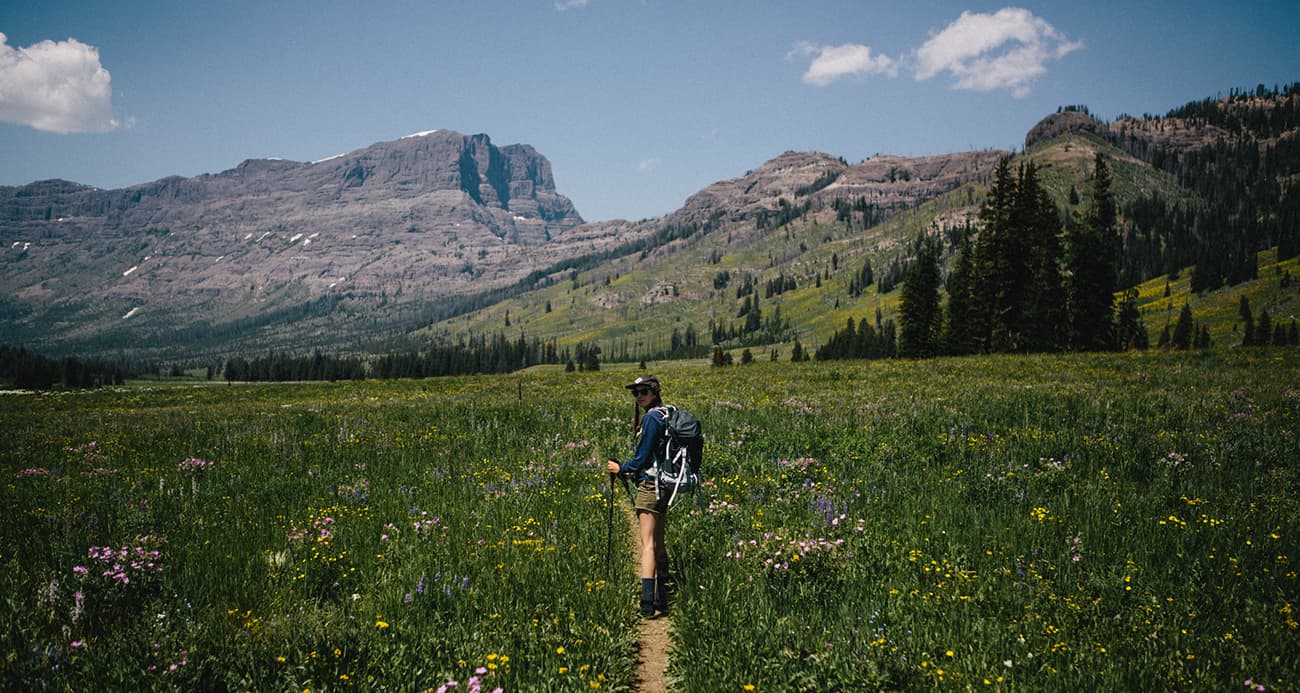 AIMEE, TRAVELING THROUGH THE WILD FLOWERS, SEARCHING FOR A RIVER. PHOTO BY TIGHT LOOPS FLY

“It’s a funny thing for two artists to be romantically involved and live together,” Chase told me. “It’s safe to say that many intensely creative people are flakey and manic, so it’s kind of a crapshoot how you’re going to feed off each other. I’m classically trained in filmmaking, and Aimee is not—that’s very important. If I’m bogged down in some bullshit, I look over to something Aimee’s doing, and it seems more free and intuitive.”

Back in Massachusetts, Chase has worked in construction, Aimee in garden and landscape design, but they’ve transitioned to fulltime creatives. “We’ve been working for ourselves since this past fall,” Aimee said. “There are stresses with that; we’re together all the time. We’re definitely learning to find the balance between working and living together, and maintaining our relationship.” They’ve worked weddings together, and shot various corporate gigs.

Despite their differences, both as individuals and artists, their images share a fascination with an interstitial dividing line, their shots hovering at the boundary between air and water. “It’s the tension between that metaphorical and literal line, the water’s surface,” Chase said. “Through this act and this connection, you’re able to breach that contract between your world and theirs; you exist out here, the fish exist down there. You get a glimpse of this thing, gasping in your world for a few moments, then it returns to its own world—the whole thing is so archetypal. That’s the most interesting thing about fishing, and I can’t help but express that visually.”

Their handling of fish further expresses a kind of reverence— it goes way beyond the Keep ’em Wet movement. Fish are rarely held above the water. “In the air, a fish is this flaccid, gasping thing,” Chase said. “Back in the water, the fish is streamlined. It has its vitality.”

“It’s definitely intentional,” Aimee added. “We keep fish in the water as much as possible, and we always strive to be delicate when handling them.”

It struck me that, on many of their release shots, the hand of the angler closes, instead of opens, once the fish swims free. It’s as if the angler has tried and failed to hold on to something essential. The lens points not at the triumphant angler; we linger instead on the boil created by a trout’s escape. 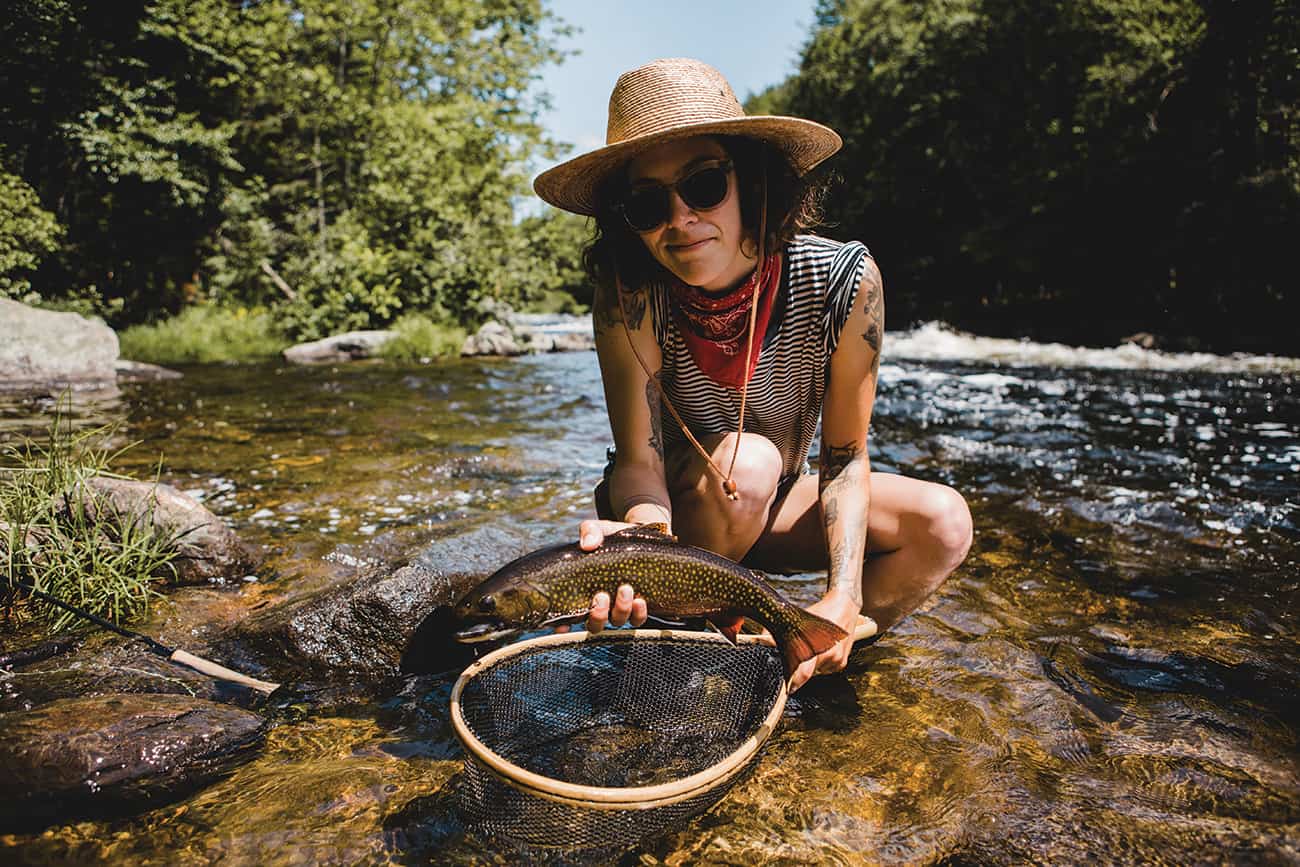 “When people tell me about our work, they say, ‘Your shots hang longer than it feels like they should, but it works for some reason,'” Chase said. “You’re trying to glean information or perspective from this thing that just passed you at a thousand miles an hour—some detail that might otherwise be missed. Every time you’re holding a fish in your hand, you wish you could sit and observe the details, the complexities, for longer. We have the ability in our films to turn one second into thirty.”

I ask them if slow motion in their films is an intentional kind of manipulation, since they use it so often. “Your brain speeds things up and slows things down on its own,” Chase answered. “Your mind sticks to certain places and you remember an event a certain way, you sort of have your own speed-up and slowdown dial, for what’s important to you. Our job is to re-create that, to point the lens at places your eyes would go anyway.”

While film is their best-known medium, Aimee and Chase also produce fine art and letterpress fish prints. Using photographs from their adventures, Chase draws specific fish— all the tiny details that make them unique—and identifies their strain on the bottom of the print: a fingerling brook trout from the Mashpee River, a mature cutthroat from Soda Butte Creek. He spends countless hours toiling over each detail, scale-byscale, line-by-line. Aimee, self-taught on the letterpress, makes prints from Chase’s drawings.

The couple is currently working on a short feature called Big Land, based on an August trip to Labrador that they made after raising nearly 30 grand on Kickstarter. As for their place in the outdoor-media world, neither Chase nor Aimee feels motivated to shift the perception of fish films. They just want to put their own perspective out there. “Filmmaking, photography, it’s just the art of seeing,” Chase said. “Everyone has a unique perspective, and we’re just doing our best to share ours.” 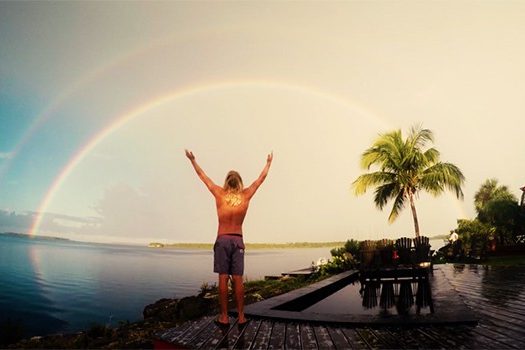 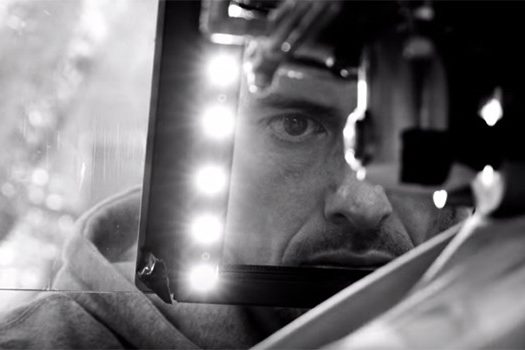