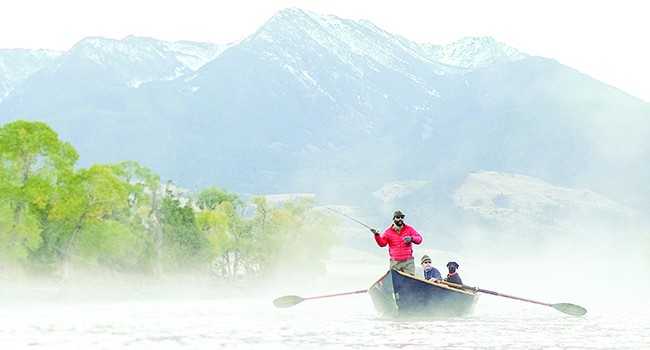 Tom Morgan may be gone, but his philosophy isn’t.

But the most amazing thing about this rod is that after nearly a year spent building it, Morgan rejected it for a small, almost imperceptible flaw: a discoloration in the one of the guide wraps. It’s a testament to Morgan’s relentless passion for the art of rod building and the intense tradition that the company’s new co-owners, Matt Barber and Joel Doub, have inherited.

“That rod is symbolic of the level of quality and the pursuit of perfection that Tom personified,” Barber says. “He told us when we bought the company, ‘If you are not able to be 95 percent done with a rod and snap it over your knee because it’s not perfect, this isn’t the company for you.’”

To flyfishers, Morgan needs no introduction. After owning the R. L. Winston Rod Company from 1973 to 1991, he left with plans to start his own shop—after the seven-year non-compete clause expired that he’d signed with Winston. But plans changed in the mid-’90s after Morgan was diagnosed with Multiple sclerosis and was eventually confined to a wheelchair, making it impossible for him to physically manufacture the rods. Winston owner David Ondaatje released Morgan from his non-compete, allowing he and partner Gerri Carlson—who Morgan married in 1996—to start building their own rods. Morgan still designed them, but Gerri, with the help of a small team, gave life to the rods of Morgan’s dreams—and those of his patient devotees.

One of those anglers who dreamt of owning a Morgan rod was Doub, a medical-device salesman from Denver. “One of my first rods was a Winston that Tom designed, so I knew about him,” Doub says. “Then I fished with one of my customers who had two Morgan rods. I was amazed by Tom’s story, and after that I kept checking out the website, looking at those rods.”

When a “for sale” announcement appeared on the site one day, Doub shared the news with Barber, then a Denver-area middle school principal. Both lifelong anglers, each had been looking at smaller towns in the West that were closer to fishing and skiing.

So, in the summer of 2016, when their search took them to Bozeman, Montana, Barber and Doub connected with Morgan and Carlson at their house beneath the Bridger Range, thinking less about buying the company than meeting a flyfishing icon.

“Meeting Tom and Gerri at their house was a monumental experience,” Doub says. “There’s a reason why so many fishermen have made pilgrimages there.” They cast some rods, and Tom and Gerri took them through the rod-making process and asked the Denver pair about their vision for the company.

“We said we wanted to keep true to what they were doing,” Barber says. “Stay in Montana, continue to source U.S.-made materials, and to make as many rods in Montana as we could.”

At that point, Barber and Doub had fallen in love with the rods, and with Tom and Gerri and their story. Likewise, Barber and Doub’s passion for quality and tradition so impressed Morgan and Carlson that the couple encouraged Barber and Doub to throw their hat in the ring.

A week later, not only did Morgan and Carlson agree to sell the company to Barber and Doub, but they also took them under their wing and into their garage, where all the rods were still being designed and crafted.

As a way to expose the new owners to his and Gerri’s unique method of rod-making, Morgan took Barber and Doub through the entire process with Tom’s newest design—a two-piece, eight-foot four-weight inspired by Morgan’s youth spent guiding on O’Dell Creek in Ennis, Montana. Six months into the formulation of this rod, on June 12, 2017, Morgan unexpectedly died of pneumonia.

After Morgan’s passing, the company moved into a shop in Bozeman. But thanks to Gerri’s continued mentoring, ongoing vendor relationships, and the help of experts who cast rods for Morgan, little else changed at Tom Morgan Rodsmiths.

To honor Morgan, Barber and Doub decided to produce a run of 50 of the rods they were creating with him. Dubbed “The O’Dell,” these limited-edition models feature all of Morgan’s favorite hardware. They are paired with a print by Western artist Duke Beardsley—with a rod/print combo also being raffled off to support Casting for Recovery. After these rods are sold out, the design will go back into the company’s product line and, as was Morgan’s custom, will not have a name.

Along with calling rods only by their size and weight, Barber and Doub are committed to the other aspects of Morgan’s vision. “We feel like stewards of Tom’s philosophy,” Doub says. “And he believed in building timeless rods that meet the demands of fishing.”

“We’re not trying to re-do this thing,” Barber adds. “Tom made the nicest rod I’ve ever cast. Now, with his designs and Gerri’s process, we’re charged with continuing that tradition.”