Power to the Pound Net 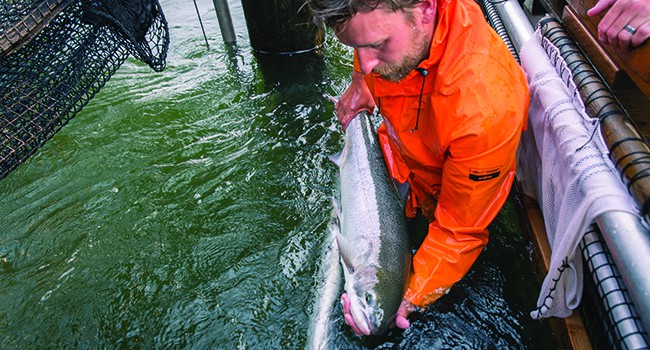 A Pound net is a wall of netting that stretches from the shoreline out into a river, funneling fish into a compartment called the “heart,” where fish are trapped but not killed. The nets were once common on the Columbia River, but were banned in Washington State in 1936 for being too effective. Commercial fisherman Blair Peterson had petitioned Washington and Oregon for more than a decade to build a pound net on the Columbia as a monitoring tool. His efforts were dismissed until the Wild Fish Conservancy took notice.

“They saw what this trap was capable of, as a selective harvest tool, and they were able to play ball with the state where I wasn’t,” Peterson says. “WFC stepped in with the technology and resources to help.”

Bycatch in gillnetting occurs when non-target fish are caught up in the mad scramble to harvest target fish (the fish commercial fishermen are trying to catch). On the Columbia system, where native salmonids return at less than on tenth of historical abundance, it’s a messy problem. Non-discriminate commercial gillnets are the worst offenders, compromising the survival of ESA-listed wild steelhead and salmon that get tangled in the mesh. The protected fish are inevitably harvested, or just plain die, alongside targeted hatchery fish—an unsustainable scenario.

“Anywhere you have a weak stock mixed into the fishery, if you don’t have a stock-selective and sustainable tool, you have a harvest problem,” says Wild Fish Conservancy (WFC) biologist Adrian Tuohy.

With funding from NOAA, permits from Washington Department of Fish and Wildlife (WDFW), and blueprints from Peterson, Tuohy and his WFC colleagues built an experimental net with the ability to selectively harvest hatchery fish and purposefully release the wild stocks unharmed. This modern version is a series of pilings and netting engineered to corral fish into a holding pen, where stresses from entanglement and air exposure are eliminated.

During summer and fall 2017, biologists caught, tagged, and released 3,000 wild chinook and steelhead at the pound net site in Cathlamet, 42 river miles up from the mouth of the Columbia. Tagged fish were tracked weeks later going over McNary Dam, 250 miles upstream. WFC published an online log of their activities through the season. The Fish Trap Journal offers a unique opportunity for the public to follow the scientific experiment in real-time. 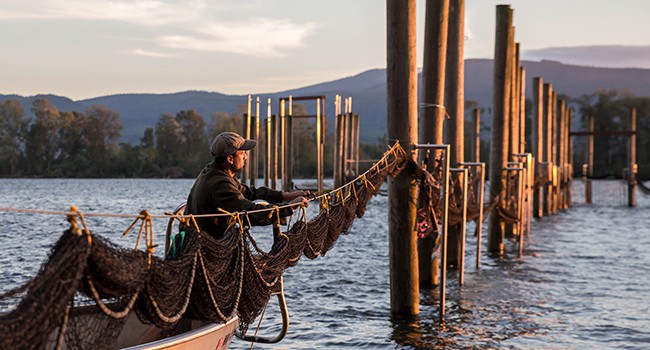 Preliminary results show post-release survival rates of 99.6 percent for chinook and 94 percent for steelhead. Mortality can be as high as 50 percent for fish caught in seine nets, and can be even higher for gillnets, Tuohy says. This data signals the potential for a paradigm shift in commercial harvest. And the scientific community is already looking to pound nets as the future of sustainable fisheries. “If you’re going to have a commercial fishery,” says Jim Lichatowich, biologist and author of Salmon Without Rivers, “it’s going to have to be through these modified pound-nets because of the very low mortality.”

Pound nets also offer a better method to track fish and manage upstream fisheries, Lichatowich adds. “The state agencies should be monitoring the catch to determine what tributaries sport and commercial fishers are using. On the Columbia, there’s a strong need to set tributary-specific escapement goals (escapement=fish that reach their spawning grounds), achieve those targets, and make sure the harvest is regulated.” With more data, WDFW can make better-informed decisions on upstream tributaries. And, with more wild fish surviving downstream nets, sport fisheries may also see a higher proportion of coveted wild salmon and steelhead available for catch and release.

The Fish Trap from North Fork Studios on Vimeo.

Biologists see pound-net applications far beyond the Columbia. The chum fishery on B.C.’s Fraser River, for example, is blamed for killing up to 25 percent of returning Thompson River steelhead every year. Canada’s Dept. of Fisheries and Oceans predicts a return of just 240 steelhead to the Thompson in 2017-18. Replacing unsustainable netting with pound nets could mitigate this steelhead bycatch on the Fraser.

“Pound nets could alleviate some of that problem,” Lichatowich says. “In cases where they’re fishing on a mixture of chum and steelhead, it would definitely help.”

[WFC is applying for permits to operate its pound trap commercially in 2018, which would bring fish to market in a more environmentally sustainable way. thefishtrapjournal.org]