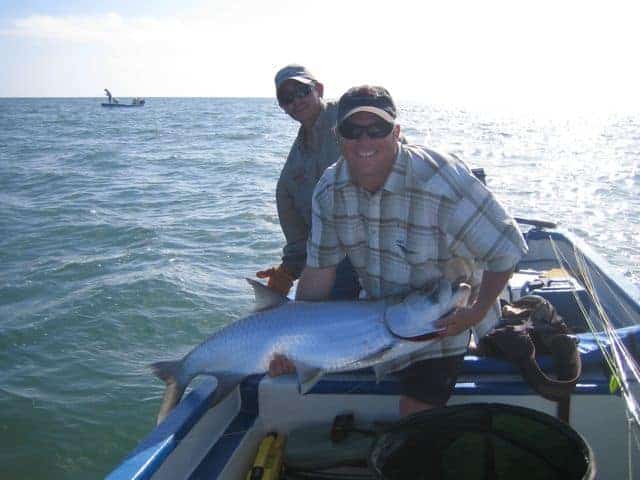 From Alaska to the Keys, the on-the-water epidemic is real

It all started several decades ago in Alaska. I was a newbie guide, hoping to land a nice tip. So, when my clients asked if they could spend the morning bonking sockeye spawners, completely ignoring the egg-crazed bows bouncing off their waders, I obliged. The guys quickly reeled in their limits, but then refused to stop. That’s when I looked over and saw another sockeye cart-wheeling downstream, and that’s when I also noticed something odd. The client “playing” the fish was holding the rod by its detachable fighting butt, instead of by the cork handle. Before I could offer any guide-worthy advice, the whole setup launched out of his grip.

In a panic, he yelled, “Get my damn rod, son!” I didn’t—that day anyway—but I did for the first time experience the gut-wrenching, shame-inducing emotions spurred by Guide Error.

Figuring it could only be worse in the merciless world of saltwater fishing, I reached out to some Florida Keys guides for their thoughts on the quandary. One told me about a couple of snowbird clients that insisted on fishing the exact same spot for tarpon all day long, simply because they’d had a great couple hours there several years back. “This is definitely the spot,” they asserted. When the guide tried to explain how tarpon move and feed seasonally with the tides, wind, and bait—the reason why the same spots don’t always produce four years later to the day—they wouldn’t buy it. They called him a liar, and they went fishless until quitting time.

A Midwest steelhead guide helped confirm the phenomenon when he told me about a recent incident on a Third Coast trib. The guide described an amazing fall day that culminated in his clients hooking and landing “a half-dozen chromers” on the swing. For some reason, however, something was wrong. Perplexed by their lack of enthusiasm, and swallowing his pride, the guide dared to ask, “What gives?” Apparently, when his clients had booked the trip the kid in the fly shop had told them to expect to find as many fish as a survey crew swinging electro-shockers. No shocker, there was no tip that day.

But it was one saltwater guide’s story that convinced me just how serious the Guide Error epidemic has become. It was prime tarpon season in the Keys, and this guide had an angler onboard who’d yet to land her first on a fly. They had rollers and swimmers from the start, but for various reasons—mostly Guide Error—she couldn’t make it happen. By day’s end, both parties were frustrated and exhausted, but the fish kept coming. As luck would have it, she finally hooked a tarpon that promptly went airborne and came unbuttoned.

Unable to control his emotions, the guide jumped off the platform and yelled, “Lady, you gotta bow to the KING!” With that, she turned around and said, “I bow to NO man!”

[Robert Tomes has spent a lifetime on the water, compensating for the harmful effects of Guide Error. He is the author of Muskie on the Fly.]