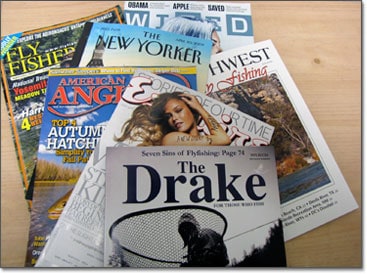 “I think a writer owes the readers a new way of telling a story.”
—Ken Kesey

As the 15th Drake makes its way across the country this fall, I find myself intrigued by all the recent chatter on the downfall of magazines, most of it coming from new-media pundits shouting their favorite proclamation: “Print is dead!”

Don’t worry, this isn’t going to be yet another publisher’s last-breath grasp for survival, or a justification for existence like the dying defense of the newspaper industry. Because the world doesn’t need the newspaper industry. Not anymore. And it certainly doesn’t need flyfishing magazines. What the world does need, however, are competent reporters, skilled editors, and writers with the ability and desire to produce a good story. And despite what many a blogger may believe, the vast majority of people with those skills are still working in print. This may not always be the case, but while the model for magazines might be broken, the medium isn’t.

I go to bed three or four nights a week reading The New Yorker. My head is on a pillow, the lamp is on, and I am treated to writing that is so good, so well reported and well edited, that at least half the time I don’t even care what the subject matter is. Like a great novel, I am transported—to the halls of the Supreme Court, to the swamps of the Everglades, to China or a remote African village. I read these stories in the hammock out in the yard, or sitting on a plane or a park bench, or in my tent at a backcountry campsite. And there is no way, for me, that a laptop or electronic reader could ever duplicate this experience. No way.

Apparently I’m not alone, which is why sales of e-books are about as popular as automatic flyfishing reels. I’m speaking now not as a publisher or an editor, but as a reader. To declare that print is dead is to declare that reading is dead. Because reading on a screen Just. Isn’t. The. Same. 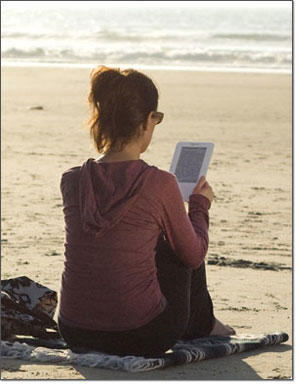 If we’re talking about technology like Amazon’s Kindle, which allows readers to look up words, change font size, and buy almost any book they can think of in a matter of minutes, then I’ll concede the point: it provides new, innovative, creative ideas. But still, does this girl really look comfortable? I firmly believe in embracing new technology—a belief I back up by constantly supporting and promoting flyfishing filmmakers and on-line innovators. Everything evolves, and magazines should be no different. (Is it ironic that I’m using my blog to make a post about the strength of print?) Regardless of the platform, magazines need to attract and retain readers. And the only way to do that is to produce something worth looking at. It all comes down to quality, and the user-experience. Brian O’Keefe and Todd Moen have made Catch magazine popular by producing a unique, high-quality, creative on-line experience. But I can’t say the same for the majority of blogs out there, or many other forms of media that are competing with print, including cable television.

On July 17th, I received a mass press release from Orion multimedia, with a big headline that read: “Consumers Forgo Magazines.” The release was aimed at convincing fishing advertisers that they should spend their dollars on cable TV instead of print. The first sentence read: “Add magazines to the growing list of things that consumers are doing without.” As proof of this trend, Orion listed Boating, Boating Life, Sport Fishing, Power and Motoryacht, and Power Cruising as examples of how “print publishing has taken a significant hit.”

Now, I can’t say for sure, because I’ve let my subscriptions lapse, but isn’t it possible that Power Cruising and Boating Life are just shitty magazines to begin with?

The next paragraph of the press release contained this gem: “A poor economy means that people are spending more time at home and watching more TV.”

Finally, Orion’s release tells us that, while print advertising is falling, “That doesn’t seem to be the case in the cable TV industry.” Consequently, they add that “Magazine editors have no choice but to simply watch ad dollars migrate to cable television.”

Well, I’m a magazine editor. And I can tell you what I watched. Less than three weeks after Orion sent their suspect press release, I watched the Outdoor Channel—one of Orion’s biggest customers—report a second quarter loss of $878,000, with ad revenue falling 16.3 percent.

True, a long-overdue culling process is certainly taking place in publishing. But critics should be careful about using too broad of a brush when painting a grave for print. Last Wednesday, TNS Media Intelligence released its U.S. Advertising and Expenditures Report. Granted, some of the numbers were bleak. Yet several of this country’s largest advertisers, including Wal-Mart, Campbell Soup, Time Warner, and Clorox, all increased their print advertising dollars from 2008 to 2009. And these are certainly companies with the resources to do their homework on ROI.

In the winter issue of Angling Trade magazine, Kirk Deeter ran a letter from Joe Healy, of Fly Rod and Reel, that was a response to an article that I had written in the previous issue, on why I think companies in the flyfishing industry should support independent filmmakers. Joe’s letter was basically telling advertisers that I was pretty off base, and that they should stick to putting their money in print (which I thought was pretty funny, since I publish a magazine for a living. But whatever.) At any rate, Joe made some good points, and ended his letter with this sentence: “When flyfishing industry folks want to target truly large numbers of new fly fishers and impassioned long-time anglers with their marketing messages, magazines remain the top choice.”

I would agree wholeheartedly with Joe, except that he forgot one word: good. As in, good magazines remain the top choice. What makes a good magazine? Who knows? Ultimately, the market will determine that. But I can give one surprising example that flies in the face of almost everything the print critics are saying: The Economist.

This is the news magazine category we’re talking about. Time and Newsweek these days look like leaflets that should be dropped from airplanes. But earlier this month, when the Audit Bureau of Circulation released its first half report, The Economist announced that its North American circulation had grown 8.5 percent from a year earlier, and that its global circ was now 1,418,013—more than twice what it was ten years ago. Even more impressive, the Economist Group reported that its profits, in large part due to an increase in advertising, grew 26 percent year-over-year, to nearly $100 million.

Last week, FOLIO: magazine, (a publication for magazine nerds), ran an interview with Alan Press, one of the Vice Presidents from the company, asking how The Economist has been able to buck the trend. His first answer: “The Economist’s success starts with the editorial product.”

After Next issue: Why the critics are right. And how print magazines can turn it around.