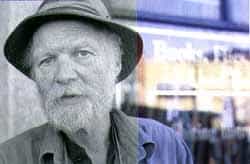 You’re a cab driver in New York City in 1971, trying to make a right hand turn at a busy Manhattan intersection but there’s some cocky bike messenger in your way and he won’t move. So you nudge him. Not hard, just enough to let him know that you’re in a cab and he’s on a bike and if he doesn’t move and soon you might run his ass over. But the bike messenger does a strange thing. He doesn’t move out of your way. He gets off his bike, walks to the front of your cab, and swiftly kicks your headlight in. Then he invites you to step outside and discuss the matter further. You, as the cab driver, make a wise choice and roll up the window instead. Because you’ve just met John Gierach on a bad day and getting out of your car would only make it worse.

“By that time I’d figured out what it took to live in New York City,” Gierach now says of the Big Apple incident over 30 years ago. “You didn’t take any shit.”

Gierach and I are sitting in the back room of the South Creek, Ltd. rod shop in the tiny town of Lyons, Colorado, a setting so seemingly Gierach-like that it’s hard to imagine him ever being part of any other world, much less Manhattan. Cigarette smoke fills the room as he describes how he migrated from Glenwood, Illinois, to Colorado back in the late ’60s.

“I graduated from Findley College in Findley, Ohio, with a major in philosophy and a minor in art and English, an absolutely worthless degree,” he says. “And I came west mostly because you could, you could do that back then, when you were 20 years old and it was the late ’60s.”

But it turns out that his degree wasn’t worthless. In fact, if you own all 13 of Gierach’s highly successful books and you think that constitutes his entire collection, you’re wrong. Because his 14th book, the one you don’t hear about, the one nobody knows exists, is actually a collection of poetry.

“I never thought I’d become a fishing writer,” he says, a rather surprising statement coming from one of the most successful fishing writers of all time. “I thought I’d be a poet or a novelist or something. I started writing about fishing because I was doing a lot of fishing anyway and I figured, ‘Hey, why not do this?'”