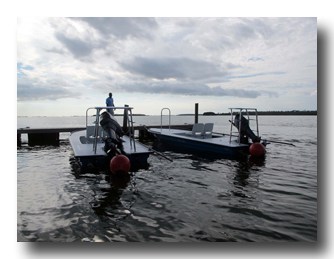 The tequila cobwebs were sticky and thick that hot July afternoon. So too were the 20-pound tarpon holding down turf wars, smearing the blood of wayward interlopers swimming their mangrove barrios. The salty streets can be mean but I didn’t realize how mean until I encountered my first Centropomus undecimalis—snook. I overshot that rookie cast by a fish-length, stripped it alongside a black lateral line, and by the time it reached gill plate, peripherally sensing something worth annihilating, the fish cranked its head 90-degrees and smashed my bug.

As of late, the sentiment toward this onetime underrated brawler has shifted. Today, snook have muscled their way into the same limelight shared by tarpon, bones, and permit. And rightly so. Many, myself included, are still mourning last winter’s fish kill in Florida, which wiped out close to 80 percent of that state’s snook populations. So, when I was bonefishing in the Bahamas last week, I was shocked, relieved, inspired to learn of a snook sighting in the Marls section of west-central Abaco. 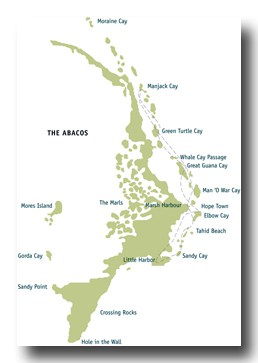 Historically, the Bahamas has never been a much of a snook hotbed. Limited access to fresh and brackish waters, which snook require to spawn, is the underlying culprit. Even in areas such as South Andros, housing some of the more plentiful freshwater sources in the Family Islands chain, snook are an anomaly. At Abaco, on the northern end of the Bahamas archipelago, they are generally considered nonexistent. Sightings instigate skepticism.

Last week that skepticism, however, received a legitimate challenge when Abaco Lodge guest Steve Peet and his guide David Tate encountered two snook in the 3- to 5-pound range.

“I had just moments before allowed a bonefish to outmuscle me and run into the mangroves, where he got hopelessly entangled…. So when, five minutes later, David said, ‘Look at the size of that snapper in the mangroves, man. T’row it at him,’ I wasn’t too keen on another mangrove episode. But I half-heartedly shot one several feet short. So we poled closer. Now we were within 25 feet and David said, ‘That’s not a snapper. What is that?’ My 50-year-old eyes could make out the distinct lateral pinstripe. I grew up on the Caloosahatchee in Ft. Myers; my dad was a rabid snook fisherman, so I know a snook when I see one. 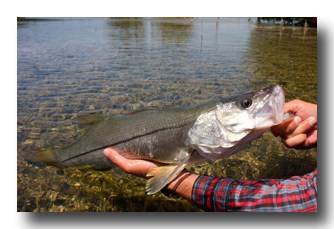 After closer inspection, seeing the splash of yellow on the tail, Tate confirmed the hunch—it was a snook, one about 20 to 24 inches in length. Thirty minutes later, while grounded for lunch, Tate spotted another, this one larger than the first, approximately 30+ inches.

Back at the dock, Peet and Tate were met with incredulous blank stares. It was decided that a second opinion should be sought. Dr. Aaron Adams of the Bonefish & Tarpon Trust has never encountered a snook while fishing at Abaco, and until last week, no snook had been historically reported in the Marls. But that does not dismiss the possibility.

He says, “I can definitely see it happening as a valid sighting.” With the most likely explanation being the movement of larvae propelled by hurricanes over the past three to six years. 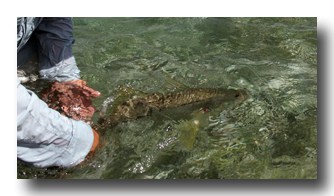 The last named storms to torment the Marls were Francis and Jeanne in 2004. But other hurricanes, such as Franklin, Katrina, Noel, and Hanna also buzzed near the island en route to alternate apocalypses from 2005 to 2008. Adams says that juvenile tarpon turning up in the Abacos are mostly from 3 to 5 years old, which also coincides with these hurricane time lines. The idea of errant snook showing up in the mix, guestimated at approximately the same ages, makes some modicum of sense.

“It’s a bit of a stretch to think these are Florida fish because of their limited coastal migrations, but it’s not beyond the realm of possibility. More than likely, however, these fish were washed out as larvae, and hurricanes are definitely strong forces in moving larvae around.”

Whether these snook will survive and thrive long enough to establish self-sustaining populations at Abaco is unlikely. But for the meantime, the hunt is on. I’ve got a new Drake hoodie and a grip of stickers for the first person who can deliver photographic evidence of an Abaco snook by the end of the year. E-mail me at geoff@drakemag.com. 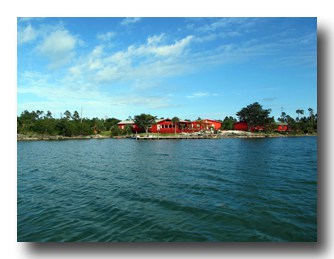