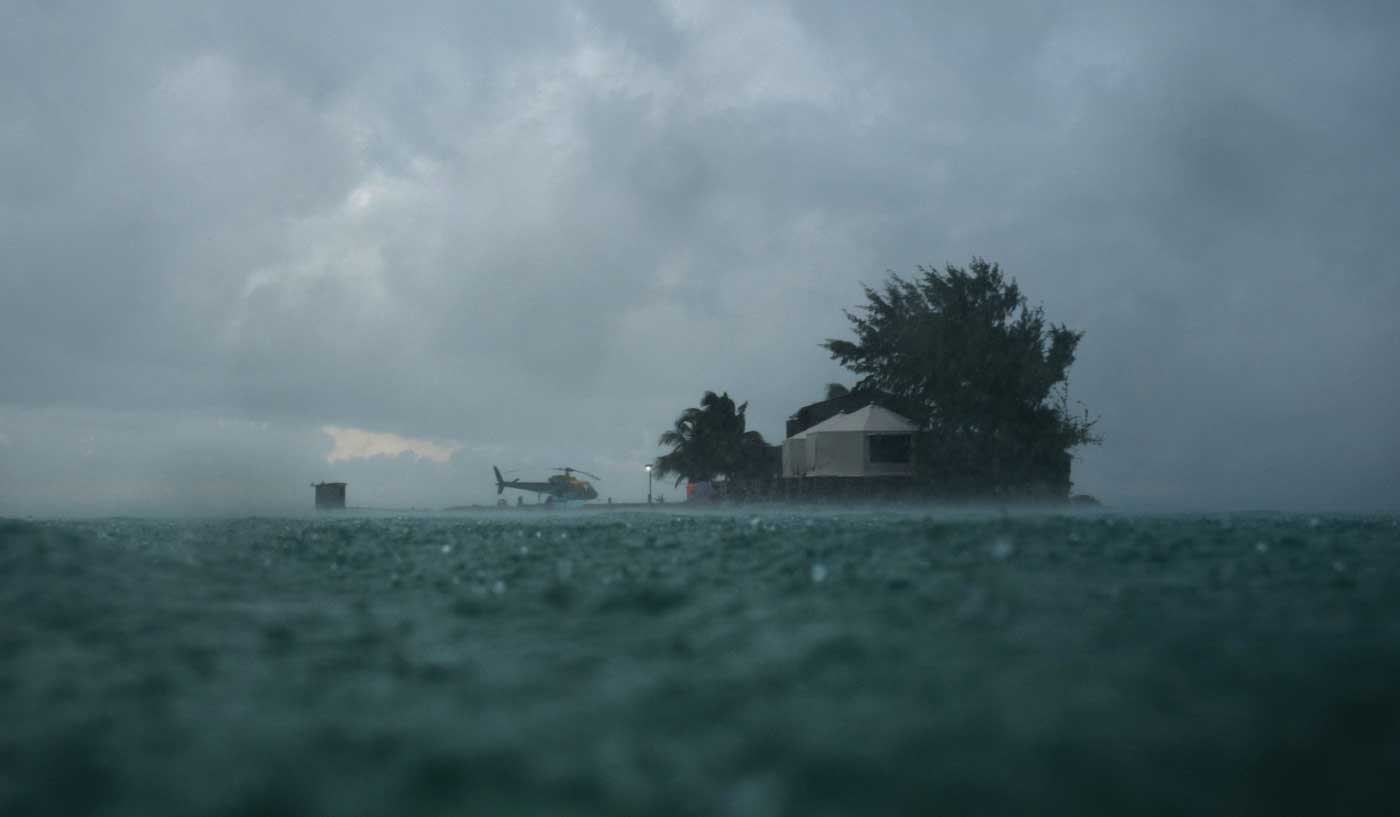 ON MARCH 20, 2017, a canary-yellow A-star helicopter kicked up a cloud of sand while planting its skids on a tiny atoll off the Caribbean coast of Honduras. Years in the making, the landing at Faraway Cay was like a blindfold removed. According to satellite imagery, the island doesn’t exist. But minutes after landing, Steve Brown was hopping out the chopper door and stringing a fly rod, about to go wade a flat where even Google Earth can’t take you.

Brown is a Colorado native who for the past decade has operated Fly Fish Guanaja in the Bay Islands of Honduras. He first learned of the uncharted cay, 160 miles east of Guanaja, via word of mouth. Locals spoke fondly of the area’s prolific lobstering grounds. And when Brown hired one these locals as a full-time flats guide, the tales of giant bonefish and numerous permit spun by Rankin Jackson perpetuated the legend.

“The place is one of those cultural waypoints where the boys go out to sea and become men,” Brown says. “And Rankin is such a great storyteller that we just assumed he was exaggerating. But after scaling down the hype, what’s left was still so intriguing. We had to go see it.”

So last year, Brown began laying the groundwork for an expedition. He hired pilot Paul Kendall for aerial reconnaissance, secured a film crew to document events, assembled a team to erect a camp complete with a kitchen and 40’x40′ yurts, and brought on paying clients to help fund the venture. That was the easy part. Buddy-ing up with government officials, knocking on the Honduran navy’s door, and immersing himself in the clandestine tactics of a dangerous trade are where logistics took a turn for the unheard-of.

In 1998, Hurricane Mitch, a Category 5 storm with sustained winds of 150 mph, pummeled Honduras with enough rain and animated mud to annihilate the majority of the country’s crops and infrastructure. On islands like Guanaja, squalls uprooted vast mangrove systems. And in the aftermath, Honduras turned dark; a place where murder rates are today among the world’s worst and where a shady cocaine trade thrives. The Caribbean edge of the country, in particular, is a primary landing zone for drug mules. According to the 2016 International Narcotics Control Strategy Report (INCSR), “The region suits narcotics trafficking due to its remoteness, limited infrastructure, lack of government presence, and weak law-enforcement institutions.” Faraway, it turns out, shares all those traits.

In order to safely access the remote cay, Brown turned his attention toward the Honduras capital of Tegucigalpa, reassuring government officials that flyfishing is not a crime.

“Moving jet fuel via fast boats and setting up remote camps are the exact steps you take if you intend to do something illegal,” Brown says. Jet fuel is made from kerosene, which puts choppers in the air, but also is used to make cocaine. Brown needed to move 800 gallons of it across a notorious stretch of open ocean. The feat would require special permissions from Honduras’ Marina Mercante (Merchant Marines), its naval commandant, the Ministry of Defense, Board of Tourism, Digepesca (Director of Fisheries and Aquaculture), plus verification of his legal Honduran business with a legit tax ID.

“Just the amount of agencies needed to green-light this project made it feel debilitating at times,” Brown adds.

In addition to a good lawyer, Brown had an organizational ally on his side in Rankin, who in a former life spent long stints on Faraway running duffel-bag exchanges as a bona fide cartel member. As Brown tells it, Rankin, 34, got caught up in “the life” soon after his son was diagnosed with sickle cell anemia, an inheritable and incurable disease. Rankin needed quick money to purchase expensive meds. The drug trade provided that infusion, albeit at a sizeable risk. Rankin eventually found friendlier career prospects through Brown. And it wasn’t until he became a guide that he realized the significance of what he’d witnessed nosing around the shallows at Faraway.

If all that sounds like fodder for some gritty onscreen drama, the filmmakers at Cold Collaborative would agree.

“The moment I caught wind of it all, I knew it was going to be a good story to tell,” says Shannon Vandivier, who founded the Austin, Texas-based production company in 2015. “As it turned out, it’s been a harder story to convey than I ever thought possible.”

Brown and Vandivier had met through mutual friend Noah Thompson. And Thompson had arrived at Faraway days earlier on the Capt. Dennis—a gear and staff laden 40-foot snapper boat—to Lego together a camp out of derelict lobster traps and give the fishing a much anticipated test run. Thompson is a flyfishing protégé who’d been mentored by Brown since the age of six; starred in the seminal 2004 flyfishing film Feeding Time at the age of seven; and was featured in the “Emergers” department of this magazine by the time he was 10. He is currently studying global tourism at Colorado State University, and was selected to play a starring role during the front end of the mission. “I needed someone who was ready for the adventure,” Brown says. “Someone who’d put his heart into the experience.” And cameramen Vandivier and Klaczkiewicz needed a good stick—someone to catch the permit and bonefish essential to illustrating a multifaceted story of a drug-runner-turned-guide.

Rankin’s lynchpin role in the Faraway saga was clear. But by March, his glowing oratory of the Faraway fishery was still somewhat unproven. If he’d overstated the bounty, then Brown, the film crew, clients, and the whole setup team would be left empty handed. There was a point on the chopper ride, Vandivier recalls, “when we were just flying by Rankin’s words,” praying they had enough fuel to find anything resembling dry land in this Google Earth deadzone. Then the guide’s words came into focus. “It was like Mad Max of the sea,” Vandivier says. “Small spits of sand that just pop up out of nowhere, schools of big bonefish in the hundreds, and a flats system that seemed endless.”

During Brown’s initial Faraway fly-over, his biggest concern was size—that there’d be enough water for several anglers to spread out their fishing. His worries dissolved upon learning that their targeted cay was part of a trio of islands, each with about 12 miles of wadeable flats between them. Twelve miles to the west, toward Guatemala, there was more: another set of five cays with another 15 to 20 miles between them. “I knew the project had to be based on a bigger fishery,” Brown says. “And no one was giving me specifics, they were just telling me it would be okay.”

All told, the three-island fishery—a mix of turtlegrass and hard, sand-bottom flats hemmed by coral reef—offers more fishable water than all of Guanaja. And as for the fishing—in Rankin’s words: “Bro… just wait till you see what’s out there.”

Go to coldcollaborative.com to view the official trailer of Beyond the Horizon. The feature-length film is slated for release this summer.