My time living among the bonefish

Actually, I couldn’t tell any of them apart. They were all bright silver and all roughly three pounds, and bonefish move pretty fast. Still, I felt as if they’d accepted me as one of their own. It was one of the happiest times of my life. I lived among the bonefish… for about eight minutes.

My cultural immersion into the school wasn’t spiritual. Nor was it borne from scientific curiosity. It was the result of a poorly tied Albright knot, a stroke of dumb luck, and a miserliness that would not let a new, $130 fly line go without a fight.

This was day five of our Turks and Caicos bonefish camp, hosted by Kyle Zempel of Black Earth Angling Co. The final hour of our final day. Winds had been gusting to 25 MPH all week, making spotting fish a challenge through the chop. I’d caught fish every day, but I still hadn’t experienced that picture in my head from the magazines: A big school of tailing bonefish, silver tails stacked against the horizon. I wanted that. “Thirty more minutes,” I told myself. “One more lap around the mangrove.”

The first tail my brain just dismissed, assuming it was a mirage of hopeful thinking and blurred vision, eyes fatigued by a week of sun and rum. But then there were more. Glinty reflections that weren’t moving like waves. I stopped and focused. It was the magazine picture. The biggest school I’d seen all week, by far. They were a long-ish cast away, but doable.

I caught one of those bonefish. (At this point I had not yet started naming them, for I was still a foreign invader, separated by thirty yards and a few thousand genes and chromosomes.) My first cast landed short, but on the second cast three fish peeled away and gave chase, and one of them ate. After two long runs and a handful of shorter bursts I plucked the Crazy Charlie from the fish’s mouth and watched it swim off.

To my great delight I saw that the school had settled back in and was tailing again off to my right. I gathered myself and fired off another cast. Another bonefish took. Another long run ensued. The fish stalled and I reeled, regaining ground. Then came the second run, and a disconcerting sound, like the “thrung!” of a bow-and-arrow being fired. I looked up to see the end of my backing drooping from the third guide—a sad, curly pigtail, silhouetted by the sun. My entire fly line was gone.

There was cursing then. I don’t remember the exact verbiage, but it was definitely colorful. My fishing was clearly over, but I stood there in disbelief and self-loathing for several minutes, and those minutes proved important. When I finally accepted my fate and turned back toward the house, something caught my eye. Not a tail this time, but a long, thin line. A chartreuse one.

“Oh, thank god,” I said aloud to no one. I took one step toward my detached fly line and it suddenly darted off, away from me. I froze. I could still vaguely see the line floating in the distance, when the light was right. I pointed my rod tip at the line to help my eyes track it, and then waited to see what it would do next. I stood perfectly still. The line began to move again, this time slowly, in an arc. The fly line was new, and it was a fancy one. More than I’d usually spend. Also, I’d never littered in my life, and I wasn’t about to start now. I wanted that fly line back, so I waited for my moment. That’s when they came for me.

Something moved in my peripheral vision, and I glanced down. I hadn’t moved a muscle since that first half-step toward the line. In that time the school of bonefish had enveloped me. I’d been wading these same flats for five days, trying to get within casting distance of random singles or small clusters of fish, yet now bonefish were everywhere. Some within a rod-length, close enough to smell the aloe on my crimson, Midwestern calves. There were bonefish in every direction now that I wasn’t a threat. And in a quiet, astonished voice, I spoke to them. “You’ve got to be fucking kidding me,” I said. To Kiara or Lars or whoever. It might’ve been Kiki.

I looked up again, toward the spot where my fly line was last seen. It was still there. Closer now, in fact, but moving to my left. Soon it would pass me by, and so would my opportunity. So, I chanced a movement, sliding my left foot along the sand. Then my right. The school did not spook. I angled my dance in what I thought was an intercept course with my fly line. It was my SAT-test geometry problem come to life. 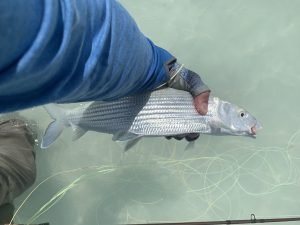 We moved together now, the school and me. In those moments the trivial distractions of life were pushed away by a singular, instinctual focus. For the bonefish: sucking crabs out of sand. For me: getting my goddamn $130 fly line back.

At some point it became obvious that I would fail. I did poorly on the math portion of my SATs. I was not going to reach my fly line in time. It was close now, but still out of reach. Once it moved past me, I’d never catch up. I had been trying to live in two worlds at once, straddling the line between fish and man. But, if I wanted my fly line back, I had to leave my world behind and fully enter theirs. And so, I dove.

I leapt, horizontal, dropping my rod mid-bellyflop and grasping with both hands for the line. The school of bonefish exploded in every direction, betrayed by one of their own. I was disowned.

The line went tight in my hands. “There’s no way,” I thought. But why not try? I let a dozen yards or so slip through my fingers, then tightened my grip and retrieved it, hand over hand. I repeated this several times, letting it run a ways, then pulling it back. The fish circled me, and I pirouetted with it. “No one will ever believe this,” I thought (and maybe you don’t).

I hand-lined the bonefish to my feet, snapped two quick photos, then released it. I did not name him. I knew that we would never meet again. I gathered the coils of my fly line into my arms and waded back to the house.

Yes, I caught that bonefish. But it did not feel like a victory. When I close my eyes and think back on those final moments, all I can see is the look of betrayal in Kiara’s eyes as she swam away from me, forever.