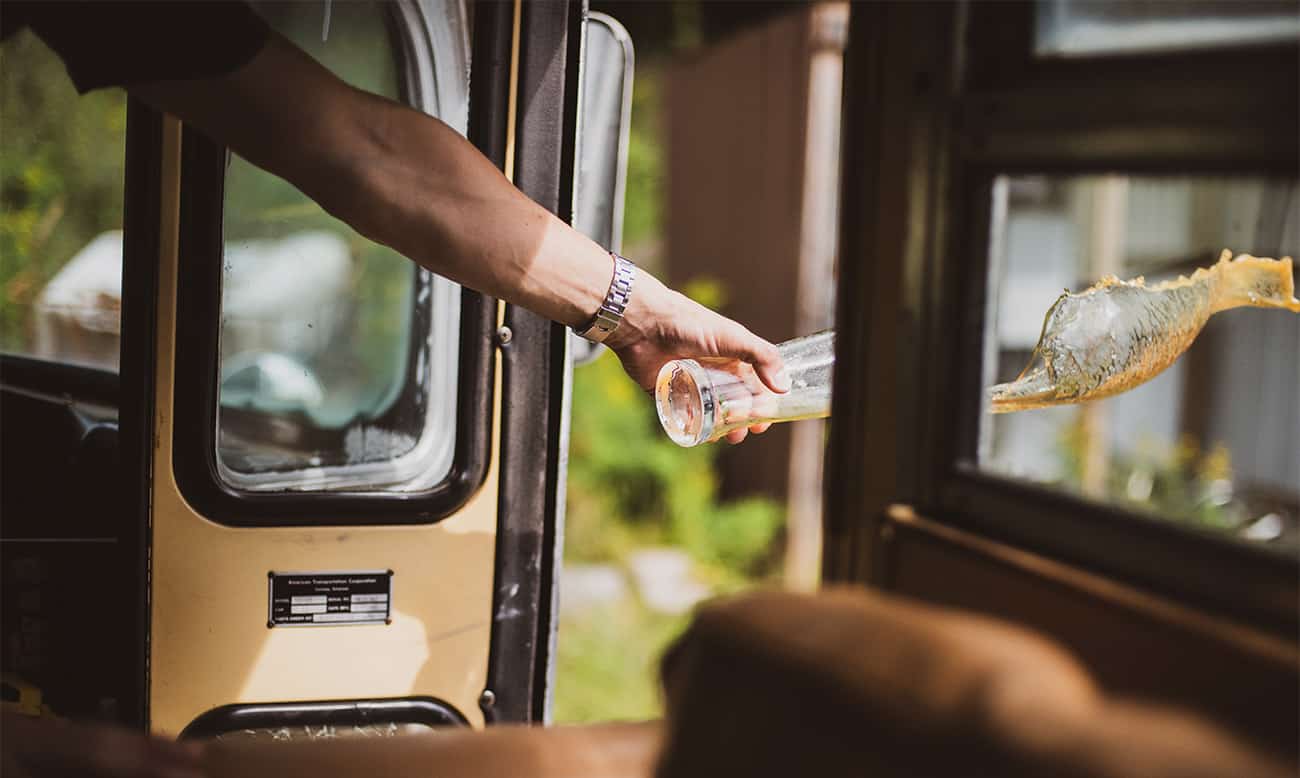 Beers we think were brewed for flyfishers

Craft beer and flyfishing go together like Jell-O shots and bachelorette parties. In the fishier towns in America you’ll find angling-themed beers of every taste and style, from Trout Slayer Wheat Ale (Big Sky Brewing, Missoula, MT) to Cutthroat Porter (Odell Brewing, Fort Collins, CO) to Steelhead Extra Pale Ale (Mad River Brewing, Humboldt County, CA). And let’s face it, we’re suckers for the fish schtick; not only are we buying that 6-pack every time, we’re probably buying the T-shirt as well.

But some brews are less obvious about the theme, their names reading like code words for flyfishers in the know. Bell’s Two Hearted Ale is named after a river in Michigan—the setting of a famous Hemingway story. Blackrocks Brewery, in Marquette, Michigan, recently released Mykiss IPA, from the scientific name for rainbows.

This got us wondering: what other secretly flyfishingthemed beers are out there? Start peeling layers off of that hop leaf, and it’s eye opening. (Until about the 5th beer. Then your eyes start to close.) We believe these seven beers, confidentially or not, were brewed for flyfishers. Each pairs perfectly with a particular style of angling— as noted by our expert taster, Andrew Reeves, head brewmaster at Blackrocks, and creator of Mykiss IPA. Happy quaffing. 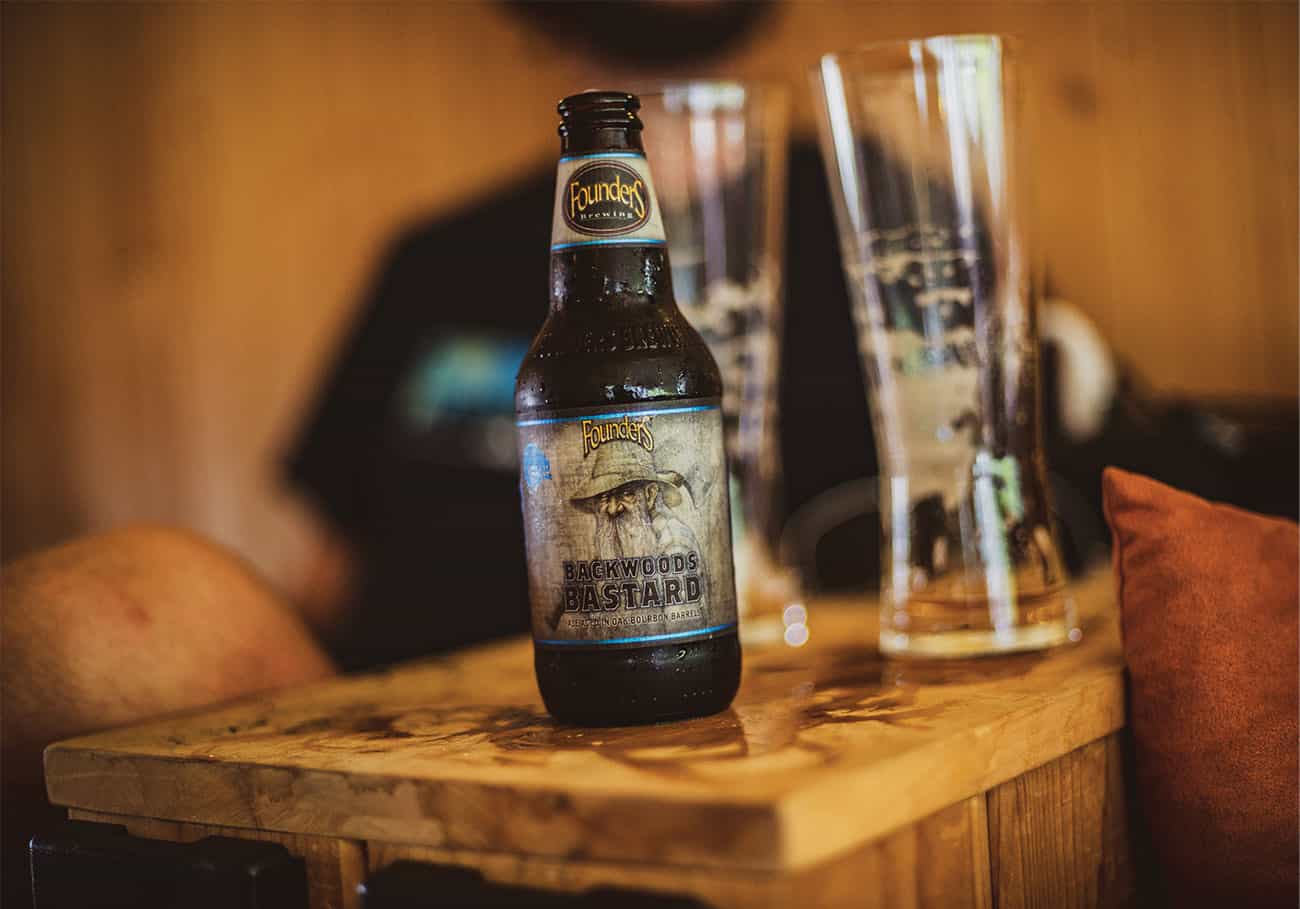 Musky are the ultimate Backwoods Bastards. Fish of 10,000 Casts, my ass; we know people who are up to 50,000 and still have nothing to show for it. (But had a follow last month!!) Catching musky on a fly demands your fly be in the water at all times. Drinking? Ain’t nobody got time for that! Consequently, if you want a buzz while musky fishing, you need to maximize your alcohol intake per sip. And at a whopping 11 percent ABV (alcohol by volume), maximizing intake is where this bourbon-barrel aged Scotch Ale truly shines.

A tart session ale named after float-trip guides? (For novices: a “session” beer is basically any beer that you can drink several of without getting shitfaced. Lower in alcohol content, typically no more than 4%-5%.) This is a lazy angler’s brew, specifically formulated for bouncing nymphs and beads alongside a driftboat. When you’re staring at a bobber all day, you’ll have lots of time to drink beer—plus a free hand to hold one at all times. The relatively mild 4% ABV will keep your reaction time sharp, even if you’ve knocked back a halfdozen before lunch. And you’ll still be able to calculate the tip for your Oarsman at the takeout.

Reeves agrees: “This is a beer that’ll bring out the flavor of that guide-provided gas station hoagie, purchased last week and floating in the now-melted ice of his Styrofoam cooler.” 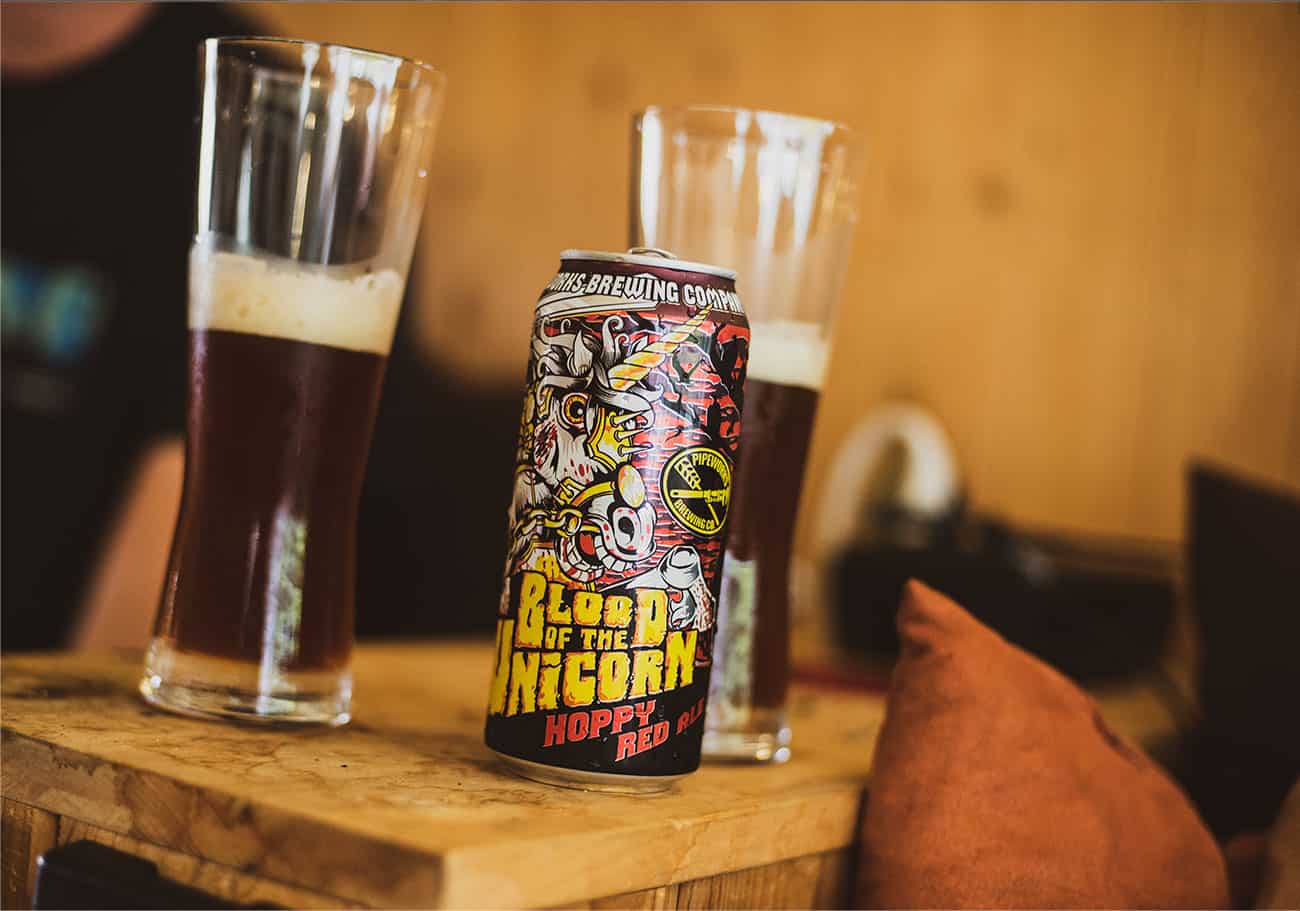 BLOOD OF THE UNICORN

That 30-inch brown you broke off on the White. The 50- inch musky living under that logjam. A 20-pound permit on the flats. Clearly, someone at Pipeworks Brewing knows what it’s like to hunt unicorns, and they’ve created this hoppy red ale specifically to quench that obsession. At 6.5% ABV, it’s just strong enough to steady your cast without numbing your senses—which you’ll need to finally slay that mythical beast you’ve been stalking all season. Or decade. Or lifetime. 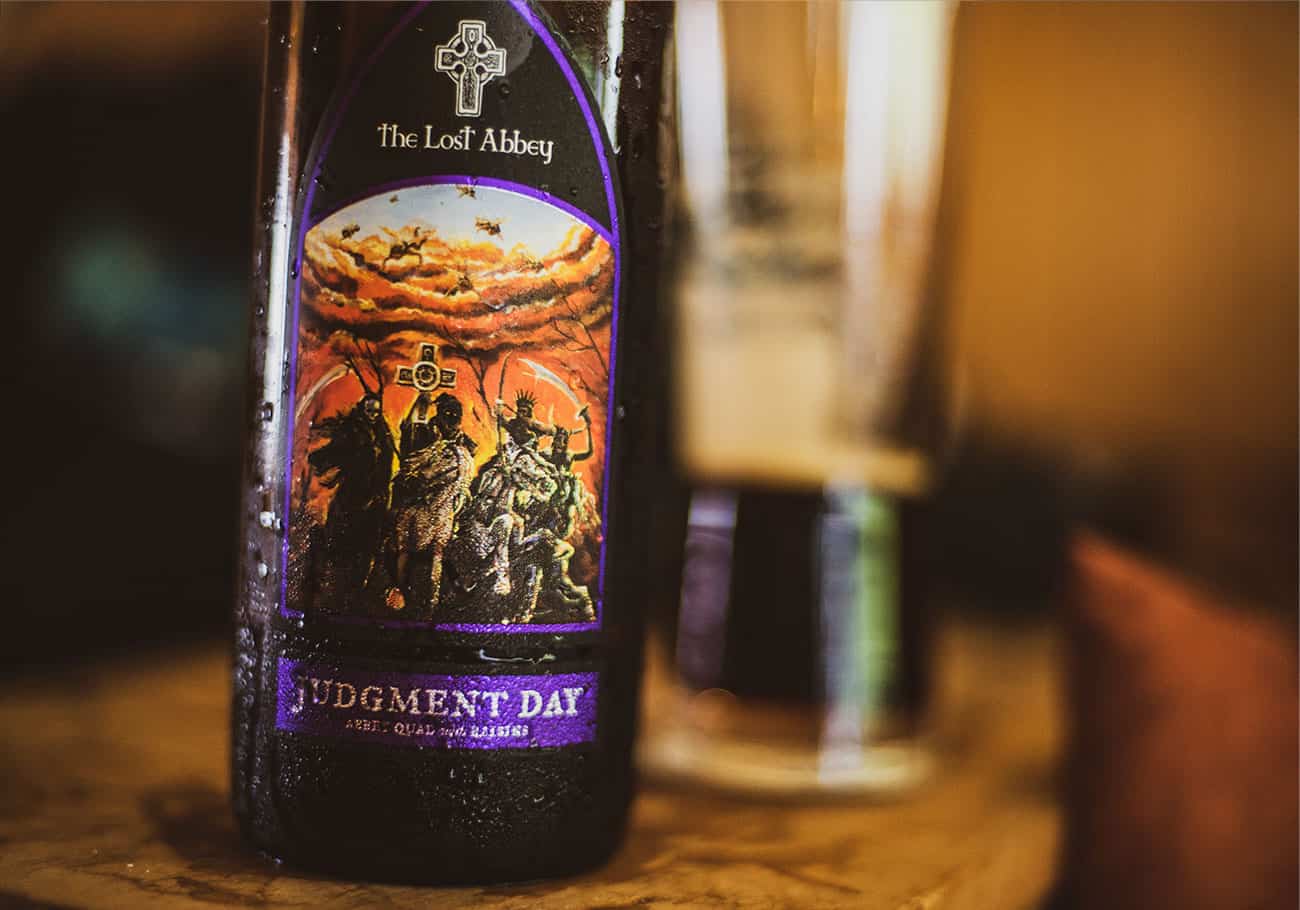 Judgment Day was named for either: A) How a typical flyshop dude treats the average customer; or, B) Swinging flies for chrome, one of the tougher tasks in flyfishing. We think the latter. This quad (beer with an ABV of more than 10%) is the perfect complement to a day of chasing steelhead. You won’t be drinking while you’re double-fisting a spey rod; you’ll be playing catch up later. That’s when you’ll need something strong, to take away the chill, along with the sorrow. And remember: if this powerful, flavorful ale doesn’t re-animate your frozen fingers and toes, then at least the 10.5% ABV will numb the rest of your body to match.

“It’s got a lot of depth to it,” Reeves says. “The malt, the Belgian yeast, the hops. There’s a big raisin-y presence. It’s a great one to just sit and sip and think.” Yes, steelheaders, just sit and think… about everything you did wrong today. 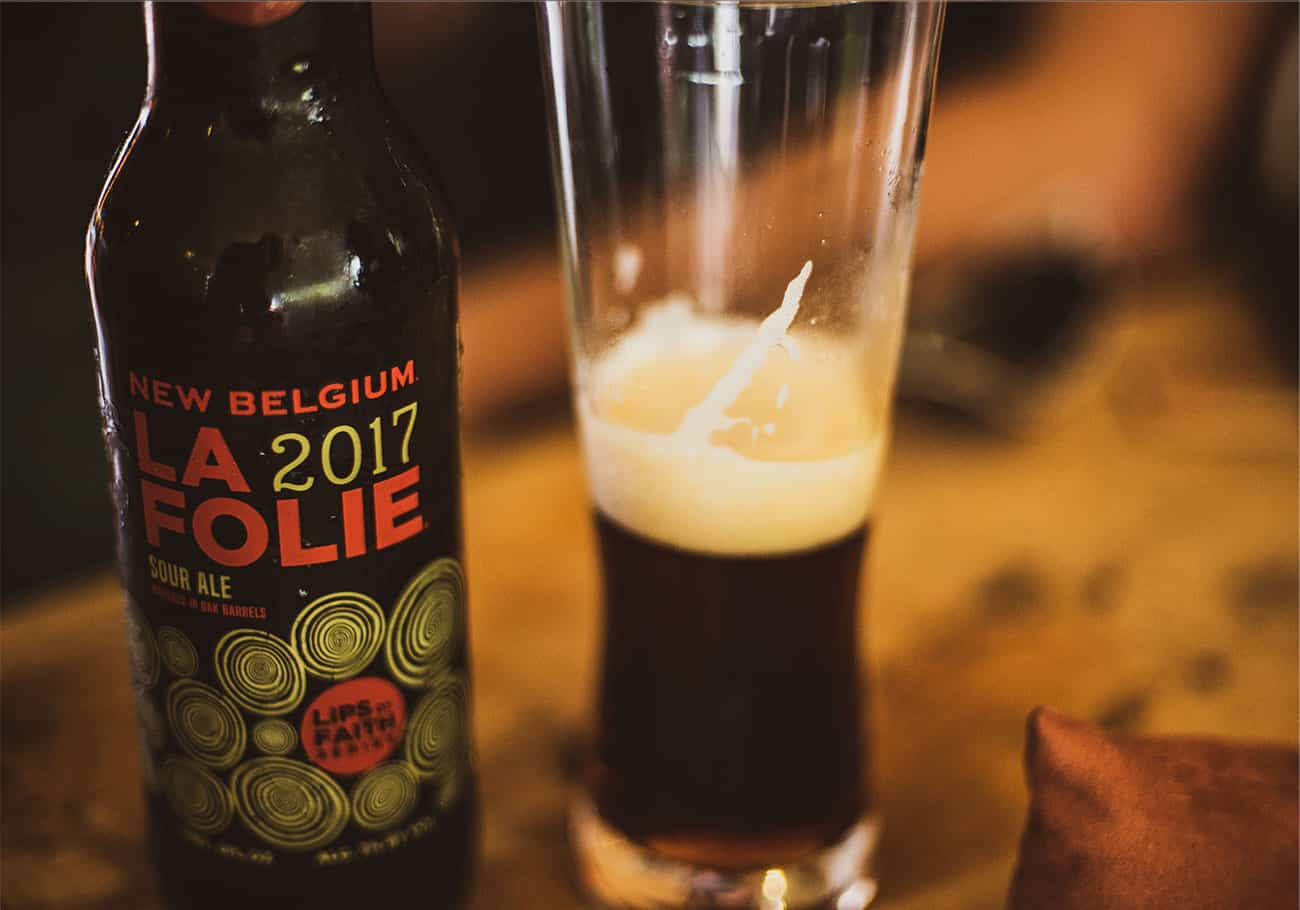 Sours aren’t for everyone. You either love them or hate them. You’re in or you’re out. The name of this sour ale translates to “The Folly”— a state of passion or madness. Your secret’s out, New Belgium: This beer was brewed for carp addicts. Like sour beers, there are no casual carp fans. You’re either all in or you’re disgusted by the very idea of it. Carp on the fly is indeed a passion, an addictive madness, and at times, pure folly.

Fittingly, Reeves sees La Folie as a brawler: “Right away you get that sourness. It hits you hard and quickly. Dried cherries. A bit musk-y.” He takes another sip. “This beer puts up a fight.” Right into your backing. 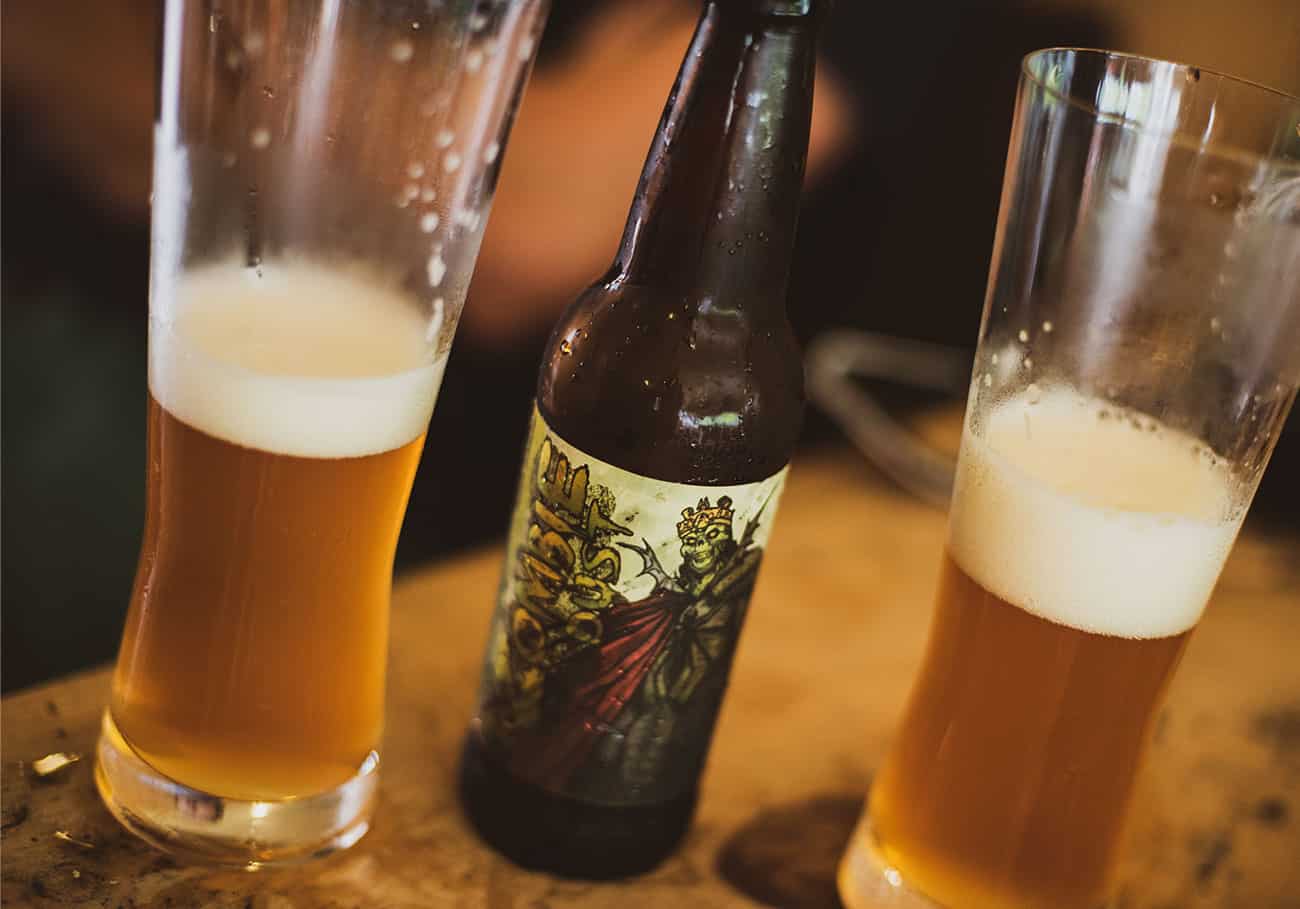 The famed Zombie Dust, a flyfishing beer? We say yes. It’s a highly anticipated, seasonal arrival that shows up in waves. When it’s in, you have to fight the crowds to get some. And it’s named for a half-dead creature with glazed-over eyes and flesh falling off in chunks. Consider this code cracked: Salmon anglers, your beer has arrived. 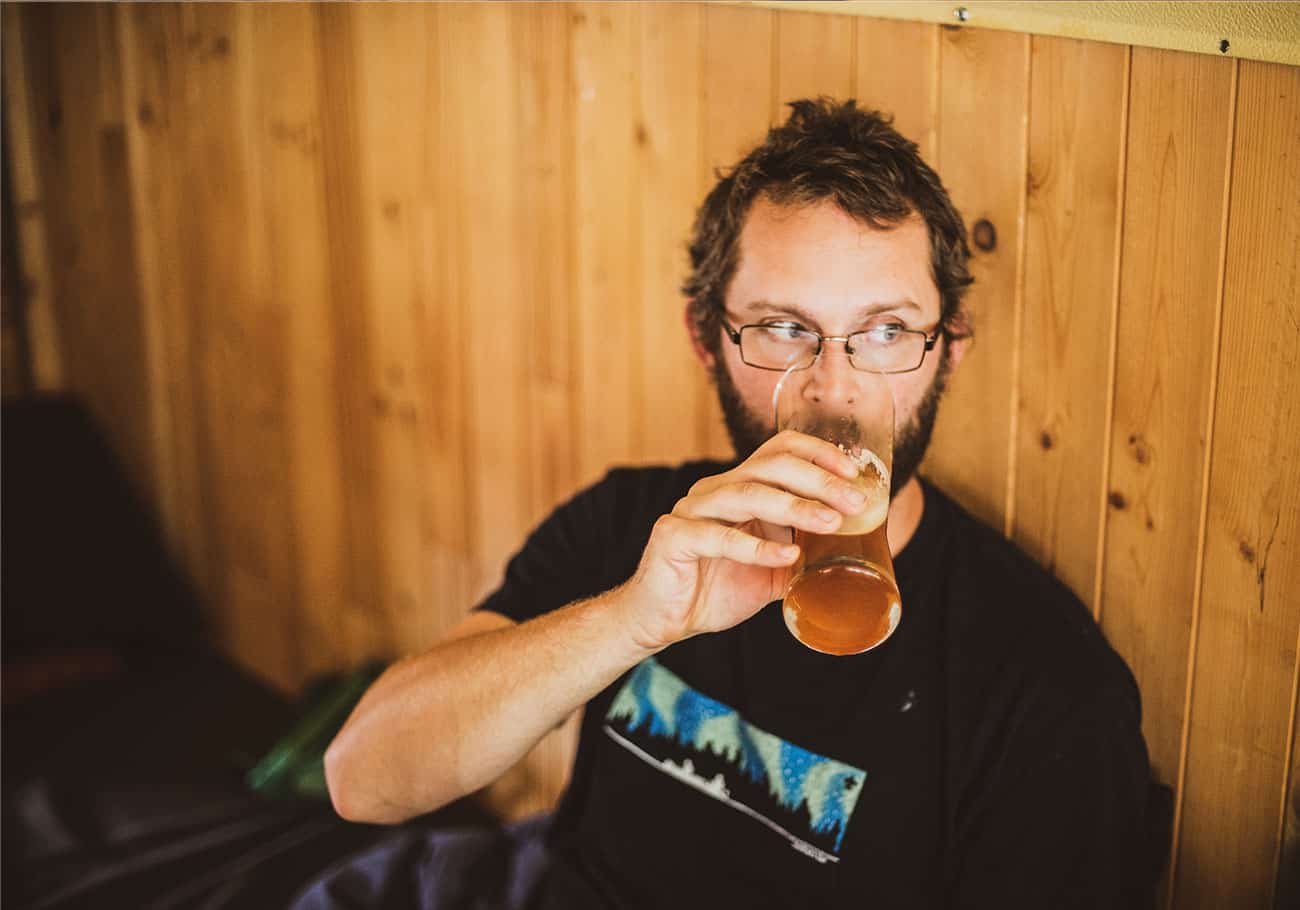 O’Doul’s, being neither “craft” nor “beer,” might seem like an odd inclusion here. But hey, there’s a time and a place. Sometimes, you might just want to pretend that you’re doing this certain thing, when you’re not really doing that thing. Like drinking. Or flyfishing. So, when you reach for the tenkara rod or a box full of mop flies, reach for an O’Doul’s Amber. It tastes just enough like the real thing to trick your brain into enjoying it.

“Why bother?” Reeves asks. Because the slight maltiness of O’Doul’s pairs well with the pride you’ve just swallowed.

Thomas & Thomas finds a friend in the whiskey business Like many Westerners, I grew up without ever giving much thought to bamboo fly rods or rye whiskey. These things were viewed—like icy ski slopes or Steelers fans—as products of the Northeast, and thus of little concern to us Left Coasters. In college I started…

Lager for good times and good causes On a recent redfishing trip to Louisiana, I was introduced to SweetWater Brewing Company’s newest offering, Guide Beer, which officially launches to the public in May. On our way out of Atlanta, I’d managed to score a six-pack of a promotional run from my friend Andy Bowen, who…

The problem was simple: We were thirsty and couldn’t find beer. Barreling north out of Little Rock, we careened through Ozark mountain highways, pushing that little rented Ford like we were competing in some sort of Redneck Indy Invitational. K.V. must have been as thirsty as I was, because he took the corners fast enough…

WHEN MY PARENTS SHIPPED my sister and me off to college, they didn’t expected to receive a craft brewer and a flyfishing writer in return. But we’d both seen enough of corporate America to realize that a lifetime spent living in it might not be worth the paycheck. A collaborative effort between the two worlds…