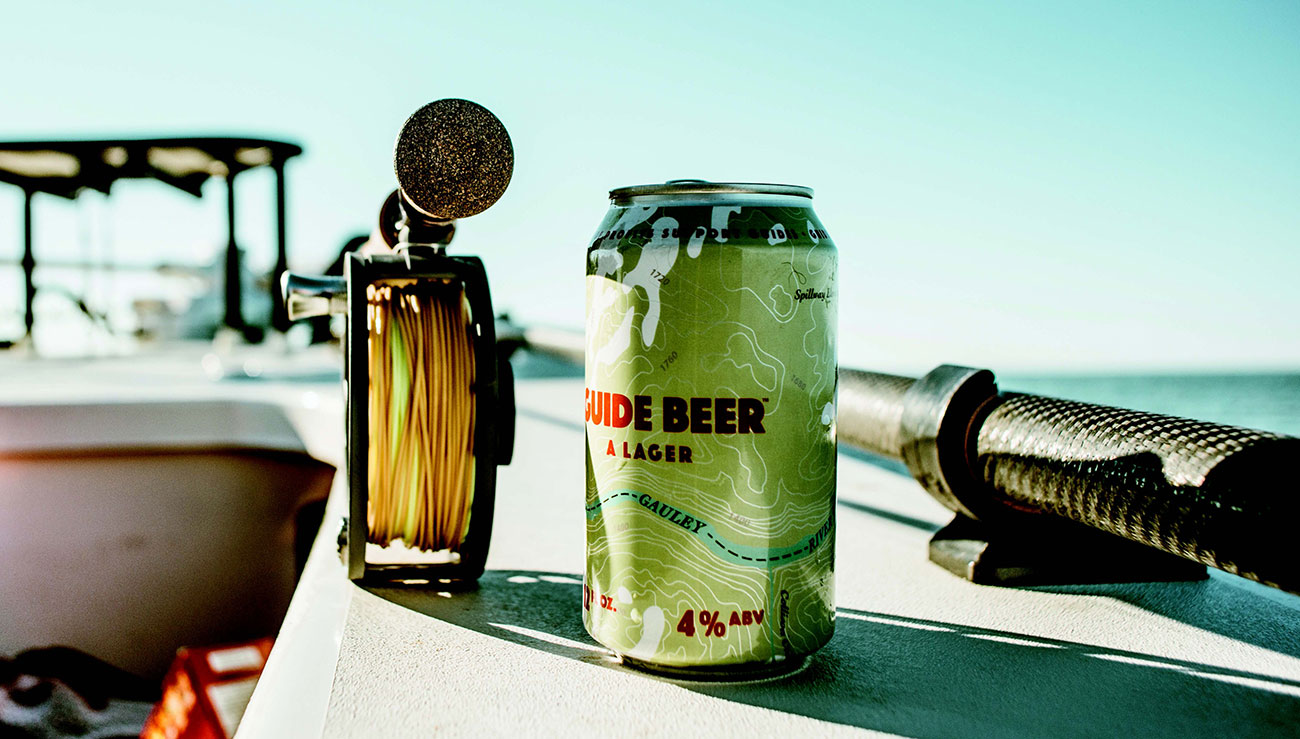 On a recent redfishing trip to Louisiana, I was introduced to SweetWater Brewing Company‘s newest offering, Guide Beer, which officially launches to the public in May. On our way out of Atlanta, I’d managed to score a six-pack of a promotional run from my friend Andy Bowen, who runs Cohutta Fishing Company, with fly shops in Cartersville and Blue Ridge, Georgia. His Cartersville shop is also home to the Last Cast Bar, where he’s been exclusively serving six varieties of SweetWater since October of 2017. In fact, Andy was among a select group that the Atlanta-based beer maker consulted when Guide Beer was in development, and he may deserve a little credit for coaxing the brewmasters toward a boat beer that “you could drink all day if you needed to.” A lager with four percent alcohol, Guide Beer answers that call.

As its name and packaging suggest, Guide Beer is brewed “for those who show us the way.” And from start to finish it has fishy people’s fingerprints all over it. Yes, SweetWater wanted industry insight on flavor, but the really important question was, “where do y’all fish?” The answers turned into designs for their cans—topo maps of the Florida Keys, Colorado’s Dolores River, the Mississippi River outlets we’d been fishing in Louisiana, and SweetWater’s home river, the Chattahoochee.

But Guide Beer is more than just a drinkable homage to those who work the water. SweetWater’s founder, Freddy Bensch, is a fishy guy himself, and he wanted to honor the men and women who help anglers experience wild places. He and his team are putting 11 percent of the beer’s profits into a fund that “helps guides who are no longer able to support their life’s work” due to injury, natural disaster, or other catastrophes. Bensch is hoping that the brewery’s financial contribution will significantly benefit an industry where the risks are plenty and the safety nets few.

Accidents do happen. I’m a trout guide in Teton Valley, Idaho, and I broke my hand a few years back. Friends later told me to come up with a better story, but the truth is that it happened in my garage, when I stepped down on an empty cooler that rolled under my weight and I tried to break my fall with both fists. This is known as a boxer’s fracture, and my southpaw bore the brunt of the collision, snapping two bones. One surgery, four titanium screws, and three months of rehab later, I was finally able to row a driftboat again.

I was lucky that this happened in the dead of winter and not during guide season, but the incident occurred two weeks after my new health insurance policy kicked in—with a ramped up deductible of $6,500. I did have a little savings, but it still takes a while to row off that kind of medical tab. Like most guides, I wanted to dig myself out of my own hole. But the entire situation reminded me of just how economically fragile a guiding career can be, whether from simple accidents like mine, or from greater calamities like a hurricane ripping through your neighborhood. Regardless the source of destruction, it’s nice knowing that Guide Beer has our back.

So, this spring, if you find yourself within SweetWater’s ever-growing distribution footprint (mostly the Southeastern U.S., but also bigger cities like Dallas, Chicago, Philadelphia, New York), keep an eye out for Guide Beer. And when you’re enjoying it responsibly and sharing quality time with friends on the water, know that you’re also doing something good for the guys and gals out there managing the tillers, oars, and push poles.